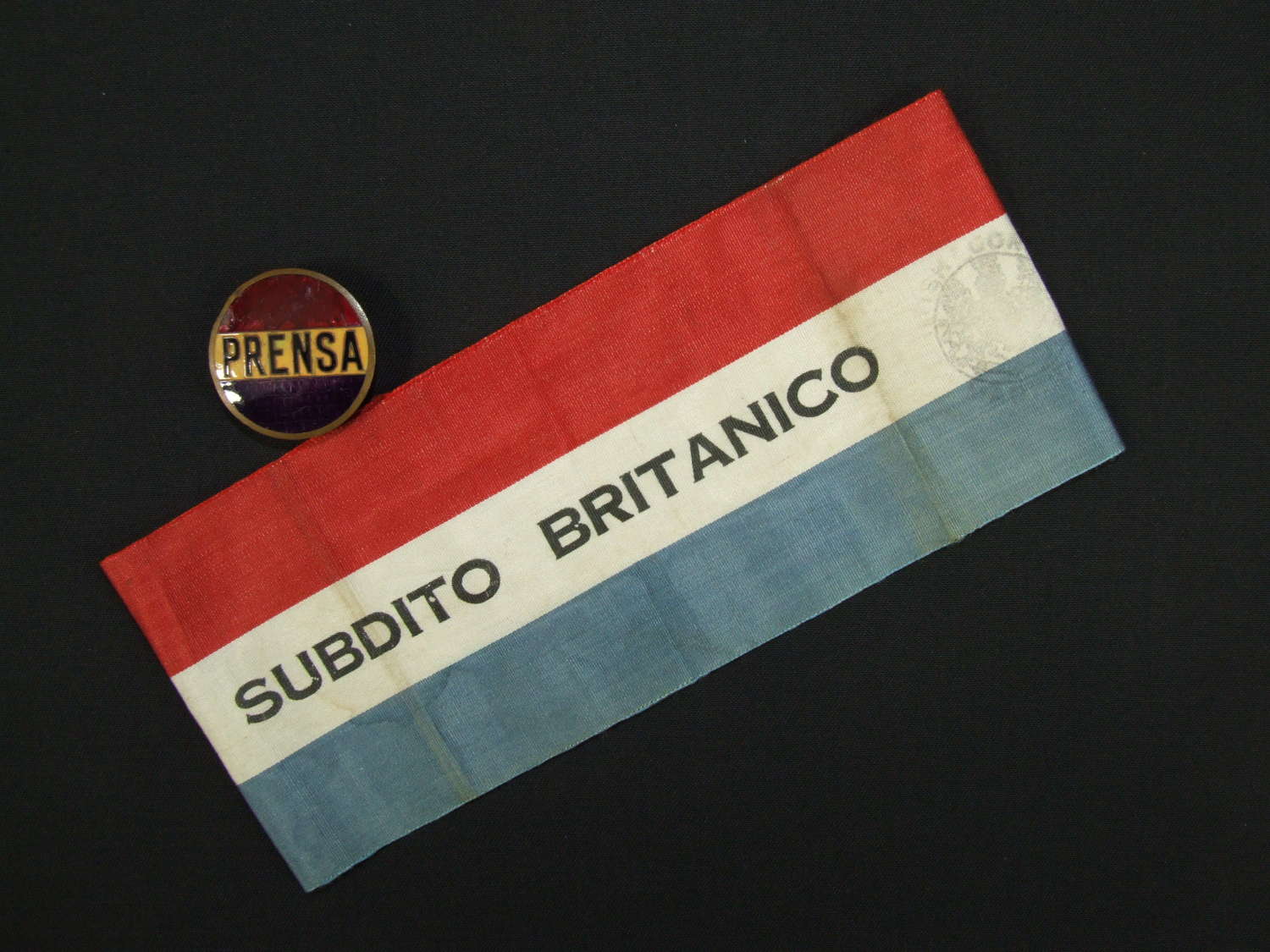 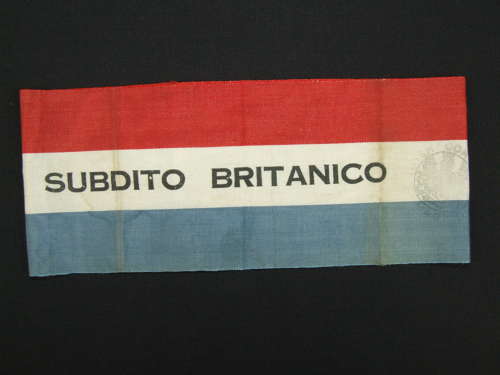 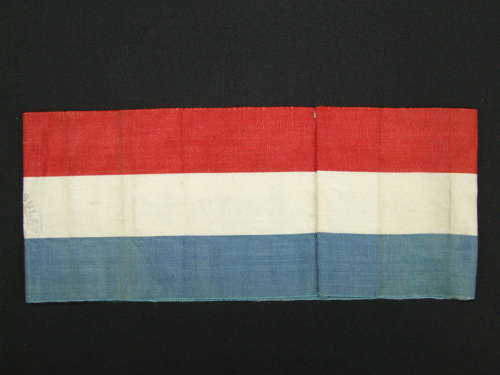 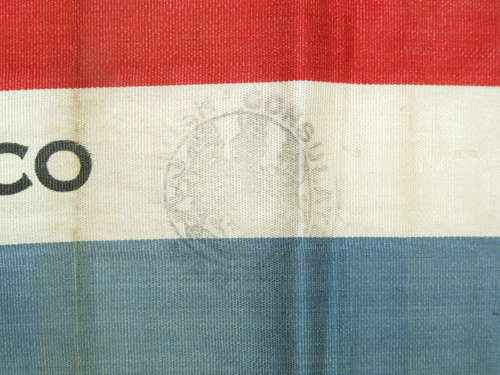 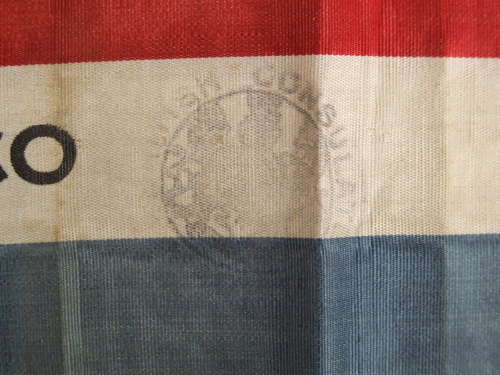 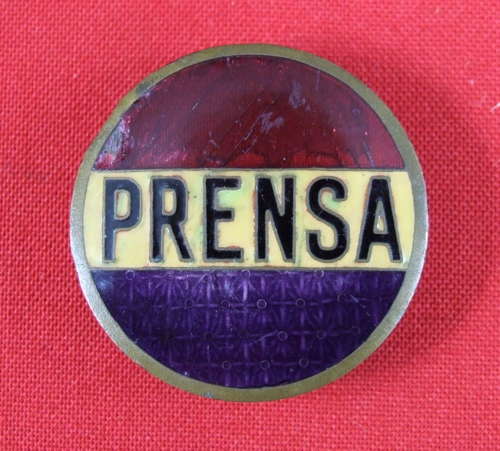 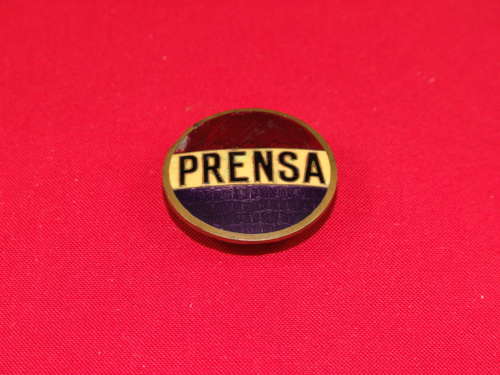 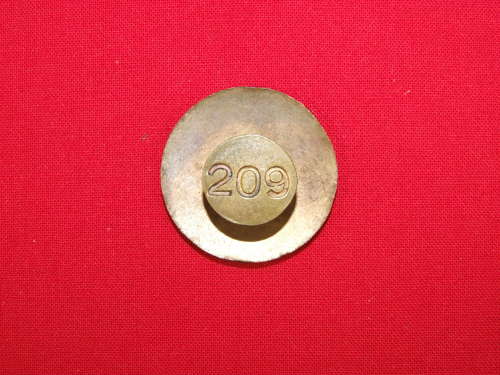 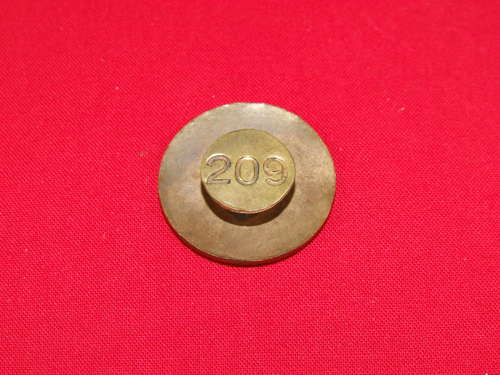 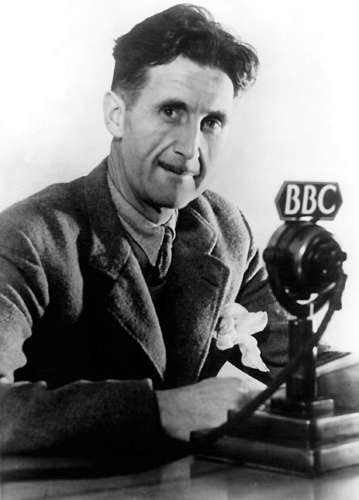 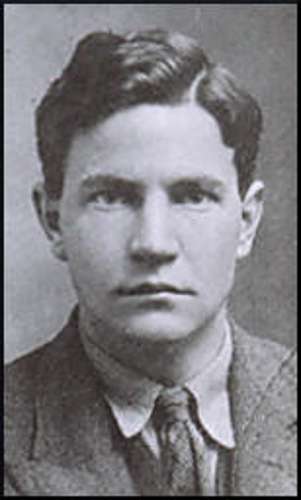 I seem to have exhausted the expletives I use to describe the scarcity of original artefacts which digress from the often-encountered awards relating to the Spanish Civil War but despite and extensive search I can find no trace, past or present of one of these apparently ultra-rare Armbands and associated lapel badges issued to correspondents from overseas countries sent to cover events.

Produced in a red, white and blue cloth this armband is constructed in rayon with the words Subito Britanico (British Subject) printed across the centre. Of particular importance is the official stamp of the British Embassy in Madrid in the bottom right-hand corner. Measuring 50mm in width the Armband is in very good condition.

Accompanying the Armband is a bronze enamelled lapel badge measuring 30mm in diameter, the centre with the word Prensa (Press) the reverse with the number 209. Sadly my research provided no list of badge numbers to individual reporters or journalist. The badge is in very good condition with a small chip on the left lower side of the red enamel. Interestingly, the camera has revealed a pattern of arrows alternating up and down in the blue segment, presumably to prevent them being copied by covert elements.

The Spanish Civil War (1936–1939) was reported by some of the most eminent journalists of the twentieth century and was the subject of reportage that still endures in public memory.

Foreign press coverage of the war was extensive, with around a thousand foreign newspaper correspondents working from Spain.

Eric Arthur Blair, or better known by his pen name, George Orwell, author of the classic novel 1984, survived his formative experiences in Spain. He arrived in 1936, eager to combat fascism, but had soon started to realize that the united front opposing General Franco was consisted of loosely tied factions with deep ideological differences. Among them were communists, socialists, anarchists, Trotskyst, Leninists and others. Orwell was a trained policeman before Spain and he worked for the Indian Imperial Police Force in Burma.

Another was the spy Kim Philby (one of the Cambridge five )who was instructed to go to Spain using freelance journalism as a cover. His main objective was to spy on the Nationalists and to report back on troop movements, communications, morale, and the military support being provided to Franco's forces by Germany and Italy. Philby quickly ingratiated himself with the people surrounding General Francisco Franco. It also enabled him to get several pro-Franco articles published in The Times to help develop his image as a neo-fascist. Franco was grateful for the support Philby gave to the Nationalists and on 2nd March, 1938, awarded him the Red Cross of Military Merit. He of course was later exposed as a communist spy and fled to Moscow during the cold war period.

An amazing and historic pair of artefacts to the Spanish Civil War.

The last two images show Orwell (BBC) and Philby. These images are available on the internet.