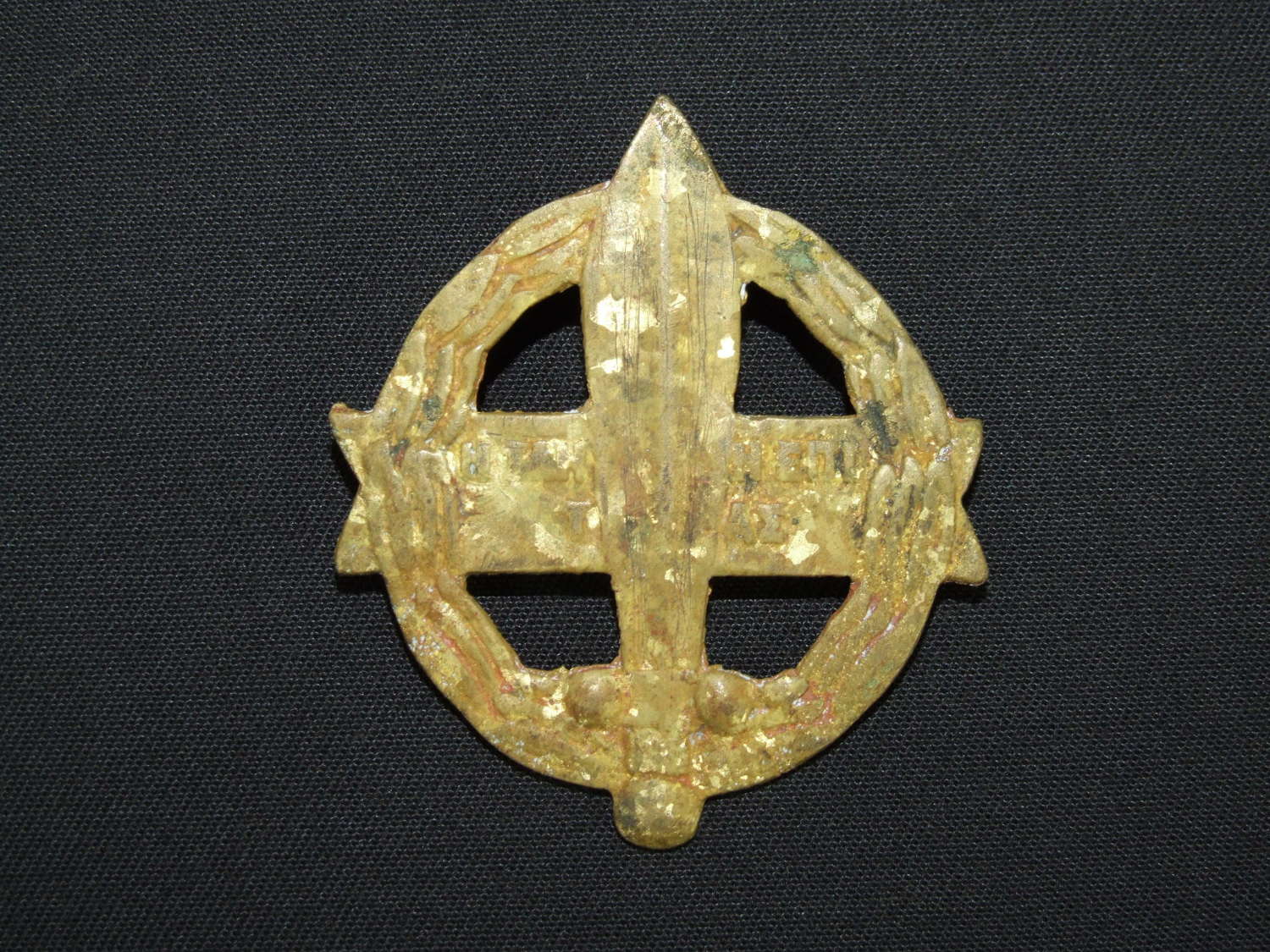 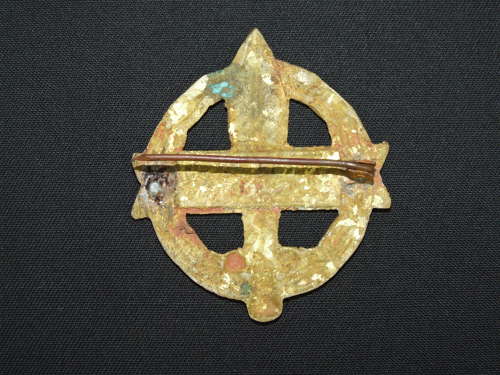 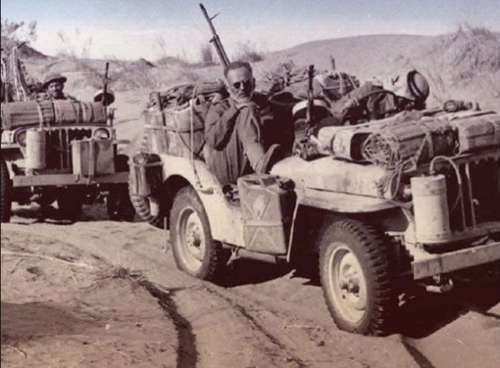 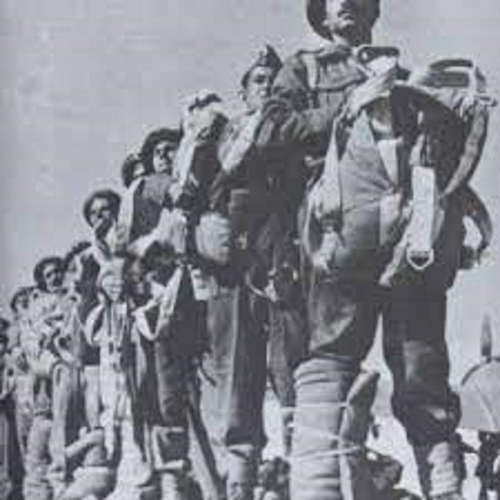 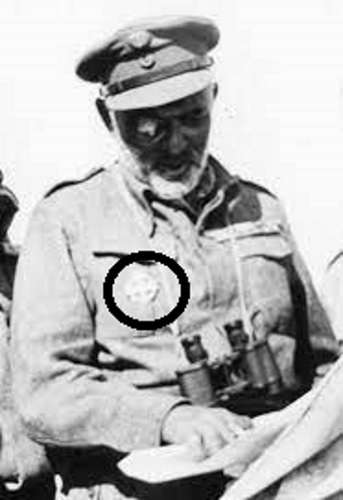 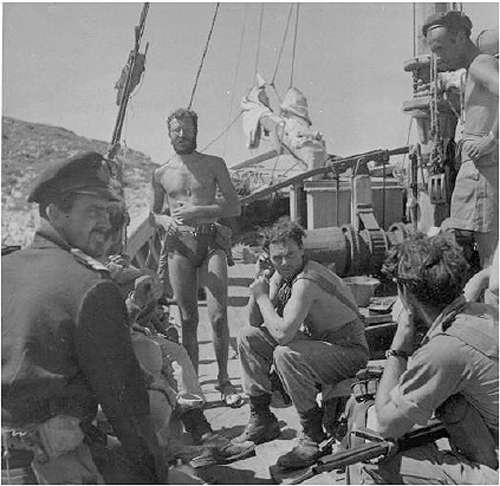 An extremely rare pin back Battledress Badge of the WW11 Greek Special Forces unit, The Greek Sacred Band or Sacred Squadron. No doubt locally made, perhaps in Egypt, the Badge appears to be of gilded brass or white metal with much of the finish now missing. On the reverse is a horizontal pin fixing now missing its hook and with 1942 raised from the castng.

This is first of three lots I will be listing today to this small elite Special Forces unit, unknown to most of us but an important part of SAS operations in North Africa and the Aegean. To better understand their role I have copied a short precis compiled by Wikipedia which I found fascinating.

The Sacred Band or Sacred Squadron was a Greek Special Forces unit formed in 1942 in the Middle East, composed entirely of Greek officers and officer cadets under the command of Col. Christodoulos Tsigantes. It fought alongside the SAS in the Western Desert and the Aegean, as well as with General Leclerc's Free French Forces in Tunisia.

On September 15, 1942, the unit's new commander, Colonel Tsigantes, renamed the unit to "Sacred Band" after the Sacred Band of Thebes and the Sacred Band of the Greek Revolution, and successfully applied for its conversion into a Special Forces unit.

In close cooperation with the commander of the British SAS Regiment, Lt. Colonel David Stirling, and with the approval of the Greek HQ, the company moved to the SAS base at Qabrit in Egypt to begin its training in its new role. However, following the Second Battle of El Alamein, the speed of the Allied advance across Libya brought an end to the era of jeep-borne raiding. Nevertheless, this period provided a useful introduction to the SAS Regiment in general, and Major Jellicoe's squadron in particular. This squadron was being built upon the amphibious skills of the famous Commando unit, the Special Boat Section (SBS) and would become the Special Boat Squadron (SBS).

With the end of the war in Africa, in May, the SAS split into two branches. The Special Raiding Squadron would serve in the central Mediterranean, before returning home to develop an airborne role, whilst the SBS would serve in the Aegean, operating alongside the Greek Sacred Squadron for the rest of the War. Both were later expanded to Regimental status.

Meanwhile, the Greeks were keen to put their new jeep-borne role into practice. On 7 February 1943, following Colonel Tsigantes' suggestion, the Commander of the British 8th Army, General Bernard Montgomery, put the Greek company under the command of General Philippe Leclerc de Hauteclocque of the Free French 2nd Armoured Division, with the duties of Light Mechanized Cavalry. On March 10, 1943, in the area of Ksar-Rillan in Tunisia, the Sacred Band gave its first battle against a German mechanized detachment, while covering the advance of the X British Army Corps that tried to by-pass the Mareth defence line from the South.

Immediately after the Allied forces captured the Tunisian city of Gabès, the Sacred Company was detailed to the 2nd New Zealand Division (March 29) and on April 6, a mixed Greek-New Zealand detachment fought against the Germans at Wadi Akarit. On 12 April the Sacred Band entered Sousse, and participated in the battle for Enfidaville between April 13 and 17.

From May 1943, the Sacred Band, now composed of 314 men, moved to Palestine, in various camps. In July, it went to Jenin for parachute training. There it also underwent a reorganization into an HQ Section, a Base Section, and Commando Sections I, II and III. After the Italian armistice on 9 September 1943, British forces moved into the Italian-occupied, but Greek-inhabited Dodecanese islands. Section I of the Sacred Band was dropped by air to the Greek island of Samos on 30 October, while sections II and III moved there on fishing boats. With the failure of the campaign after the battle of Leros, however, Samos was evacuated, and the men of the Sacred Band withdrew to the Middle East.

In February 1944, it was put under the command of the British Raiding Forces. On February 7, Section I moved for combat operations to the islands of the northern Aegean Sea (Samos, Psara, Lesvos, Chios), while Section II moved to the Dodecanese with the same purpose.

Throughout October 1944, and then again from February 1945, after the fighting in Athens had ended, the Sacred Band continued operating against the remaining German garrisons in the islands of the Aegean Sea until the war's end in May 1945.

A rare badge to a fascinating and little known unit but in fair condition only.