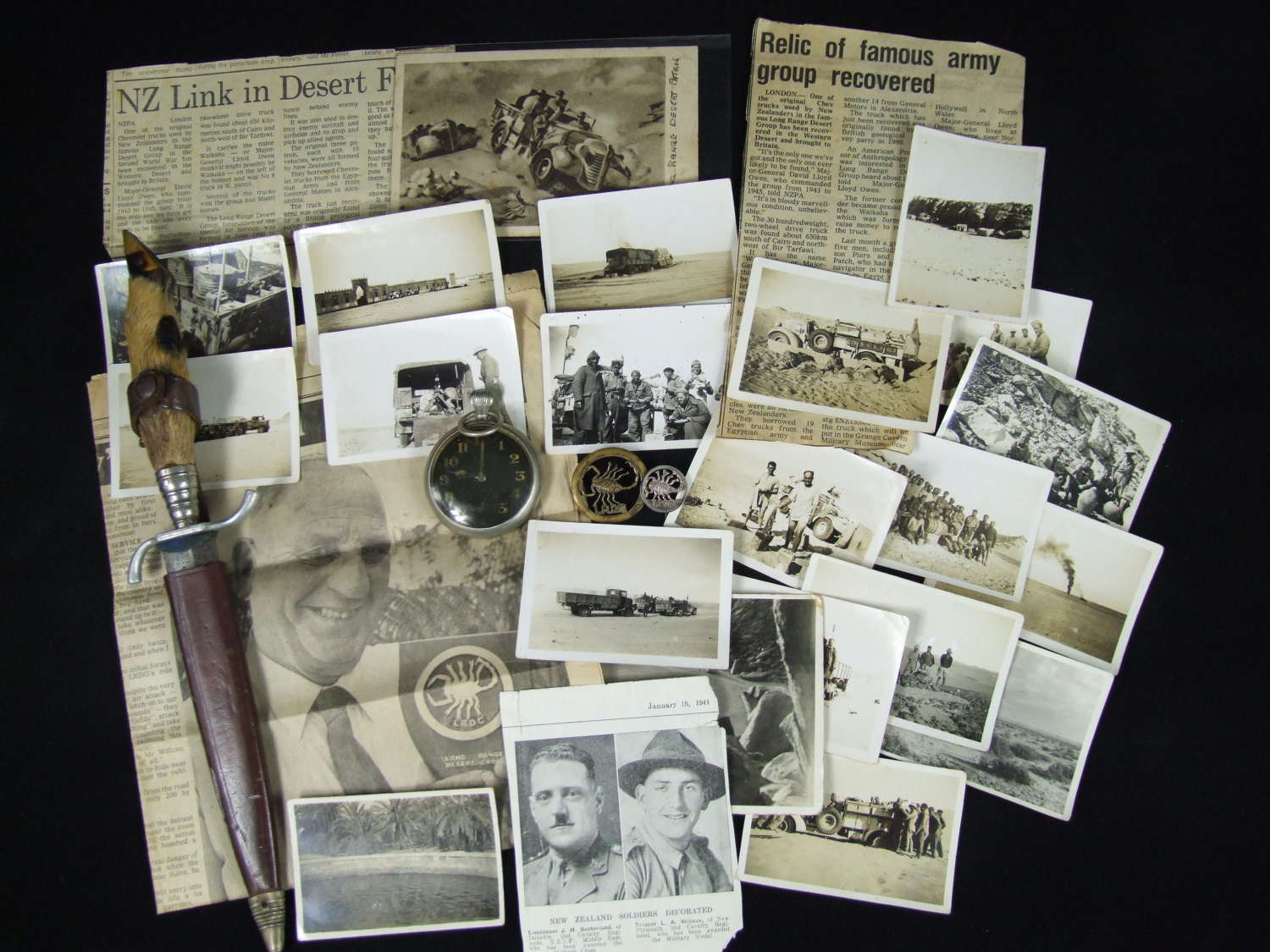 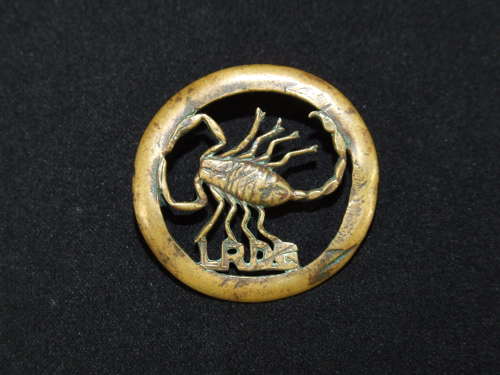 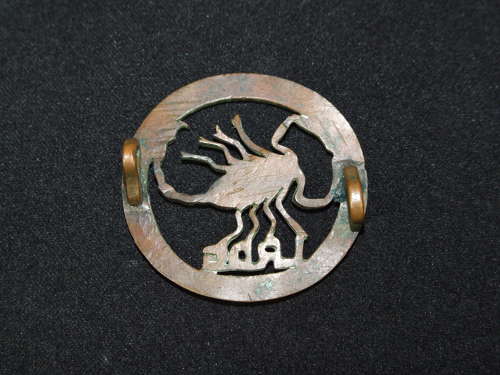 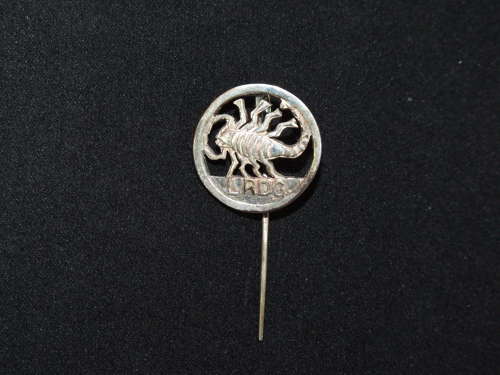 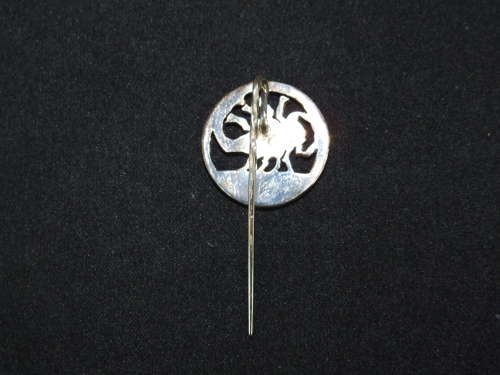 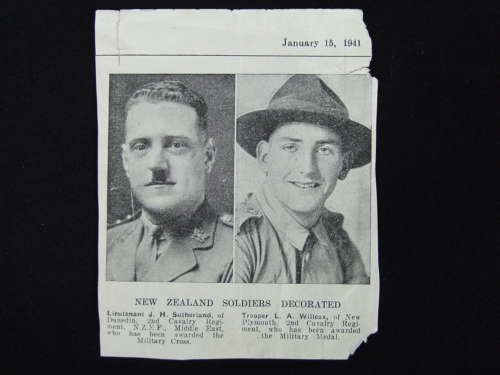 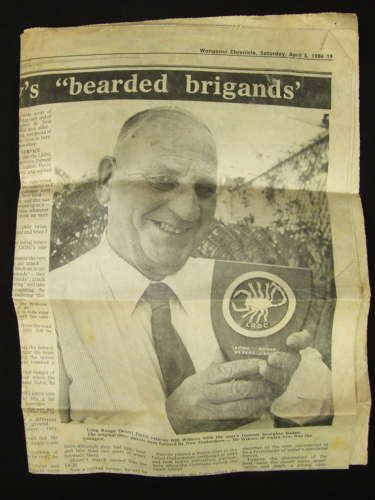 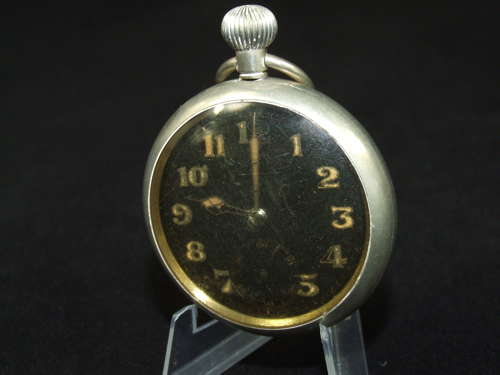 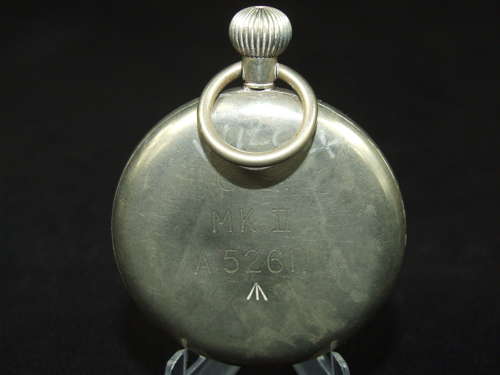 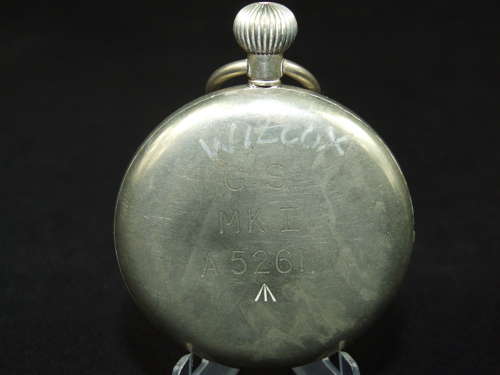 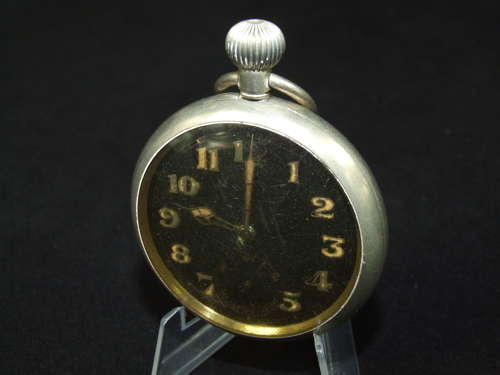 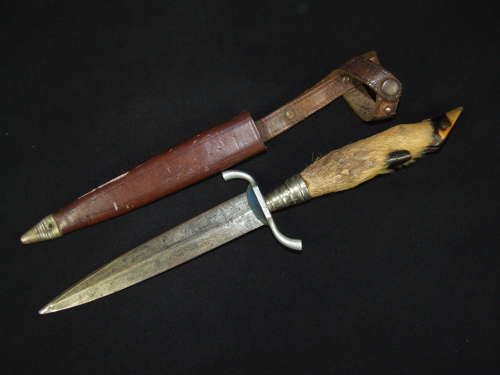 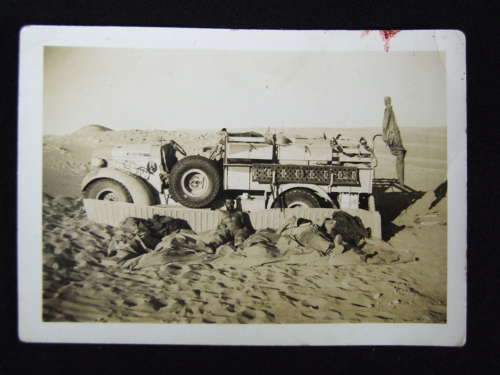 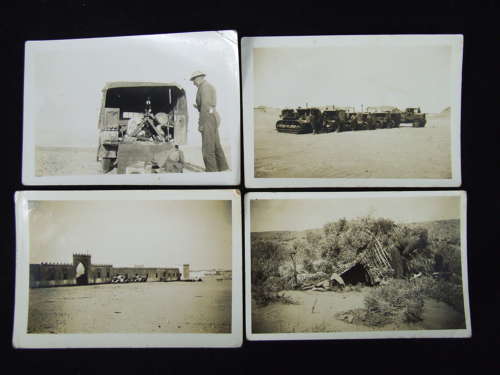 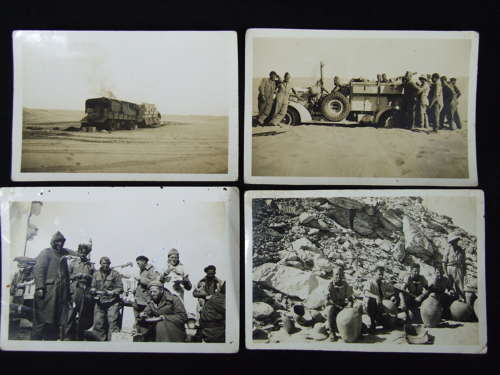 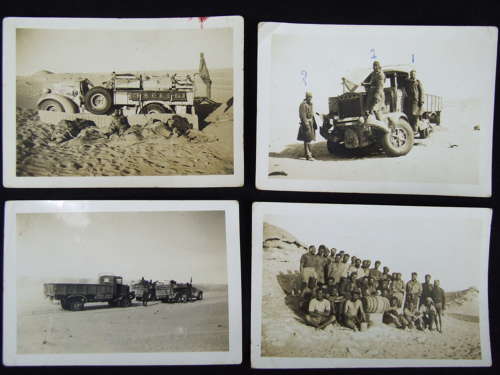 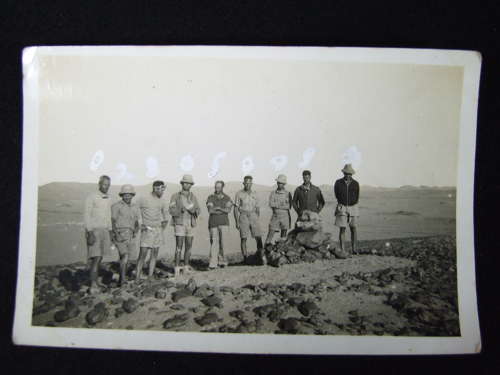 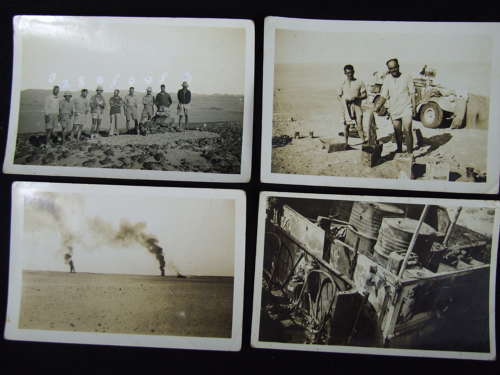 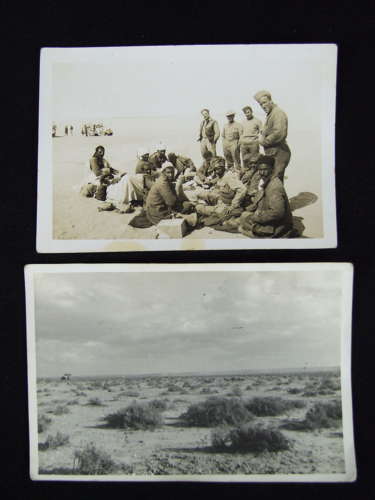 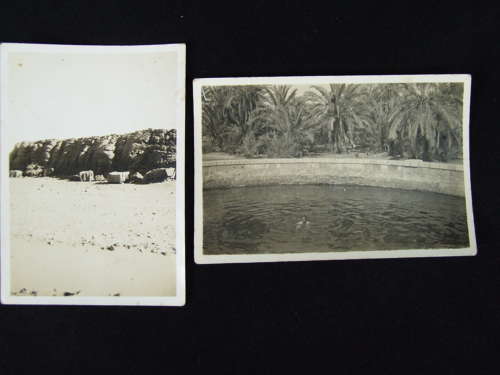 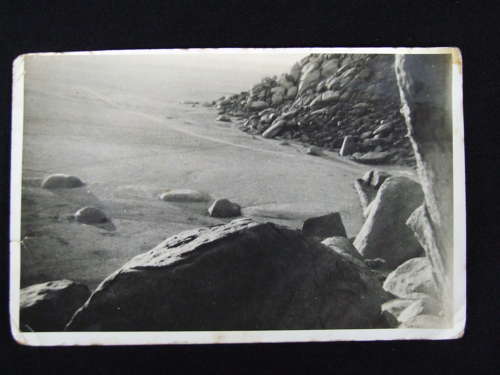 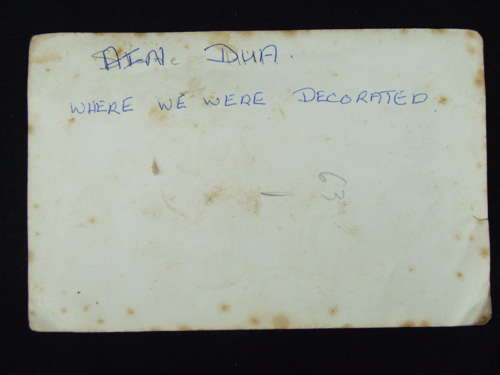 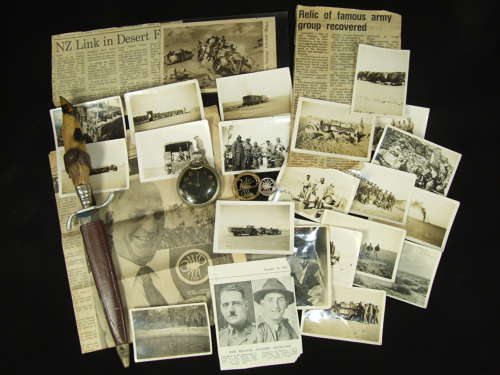 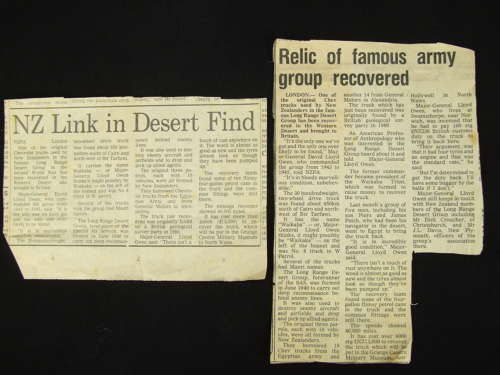 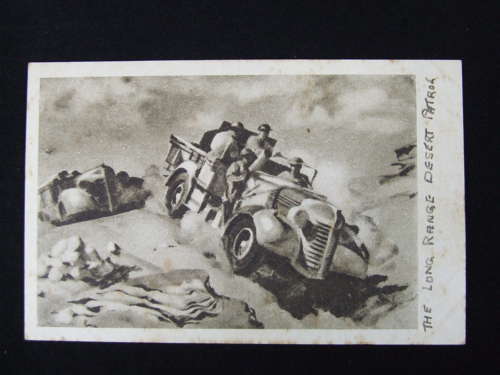 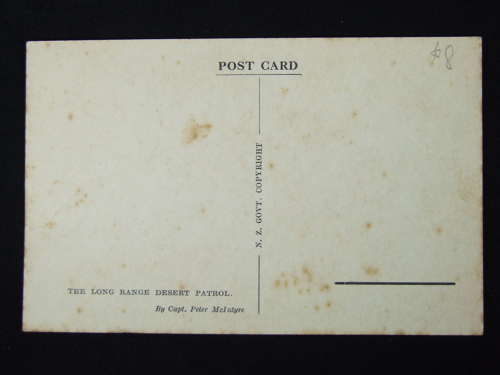 Another from the extraordinary collection of Long Range Desert Group items I have been able to offer is this collection of personal items formerly belonging to Trooper Leslie Athol (aka Bill) Willcox, service number 1290 of 2 Divisional Cavalry Regiment New Zealand Forces – The Long range Desert Group.

Trooper Willcox was be awarded the Military Medal for the action fought at Ain Dua and was Gazetted on 31st January 1941: “Two of the Div Cav men in the unit had been decorated: Lieutenant J. H. Sutherland, MC, and Trooper L. A. Willcox, MM. These men earned the first decorations in the 2nd NZ Expeditionary Force”

His LRDG Cap Badge, described by him in one of his letters as “an early Badge”, in very good condition but with both fixing posts bent over

His General Service Pocket Watch with his name on the reverse with a note saying he carried this on all the patrols, and it only stopped working on the boat on the way home! Not in working order.

A German Hunting Knife in good condition with a note saying he took this from a German officer who didn’t want to give it up as his father had carried throughout WW1.

A Newspaper cutting dated January 15th 1941 showing him and Lt. after having been decorated.

20 Original and extremely rare 95mm x 65mm all taken in the desert during patrols with the LRDG and all annotated on the back “ Under camo is a Chev 30cwt truck 1,000 miles behind enemy lines on a road watch”, “Convoy set on fire by us”, “Cleopataras (sic) Pool in Sika, first bath for six weeks”, “Patrol under camouflage” etc.

One 140mm x 91mm original photograph, the back annotated “Ain Dua, where we were decorated”

A Postcard of a L.R.D.G. Chevrolet Truck.

A page from the Wanganui Chronicle dated April 5, 1986 with an interview with Bill Willcox, and two other newspaper cuttings along with a number of letters and cards from him but also from his widow to an L.R.D.G collector.