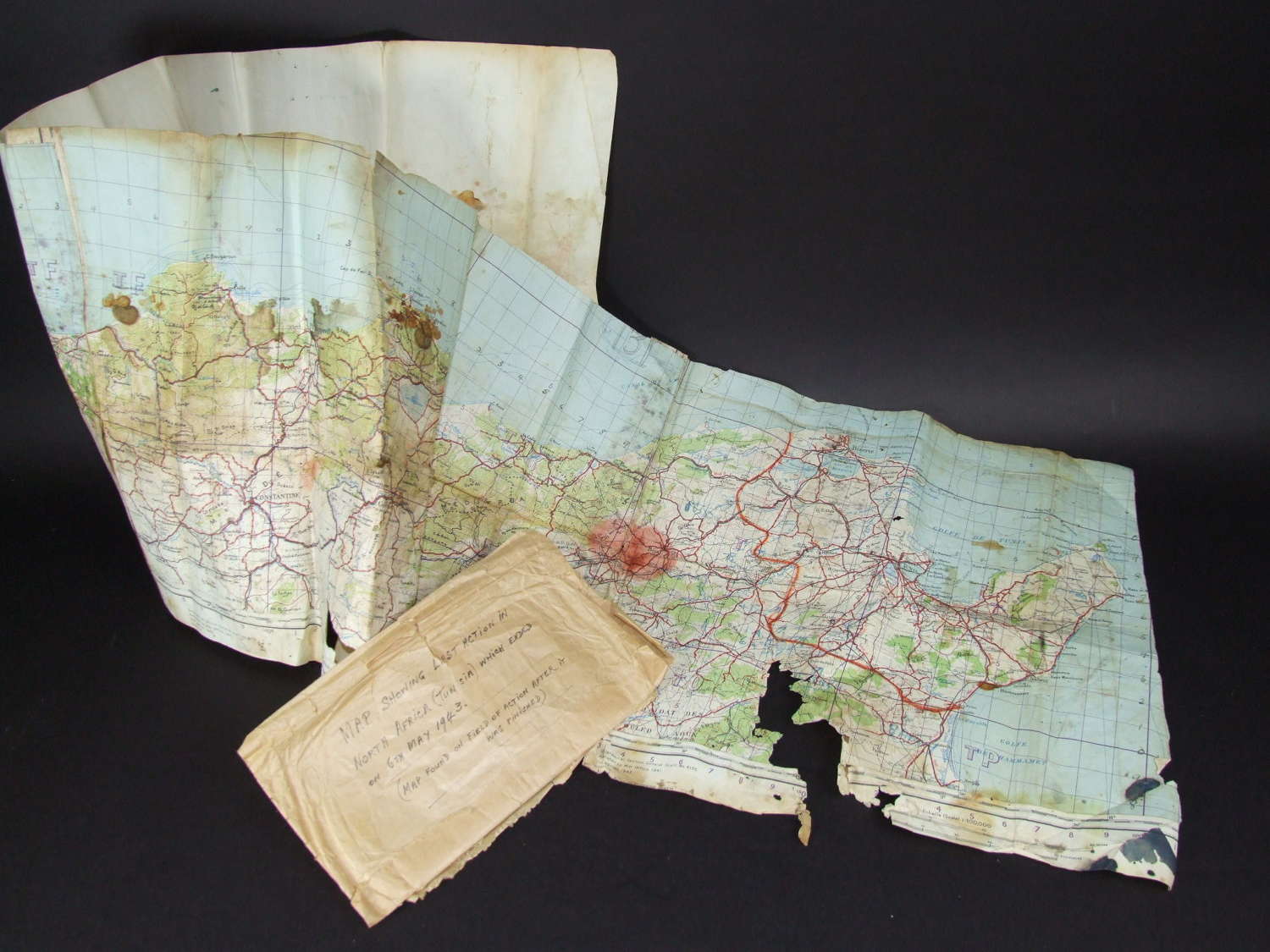 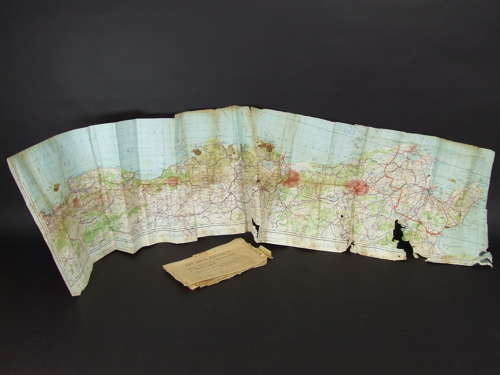 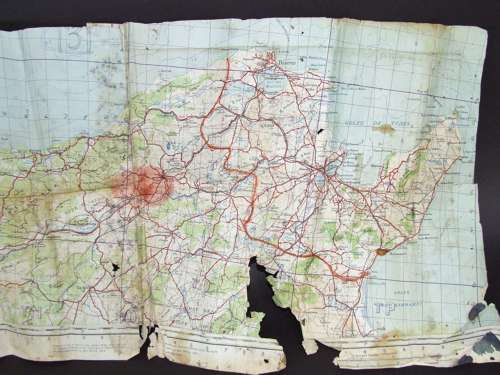 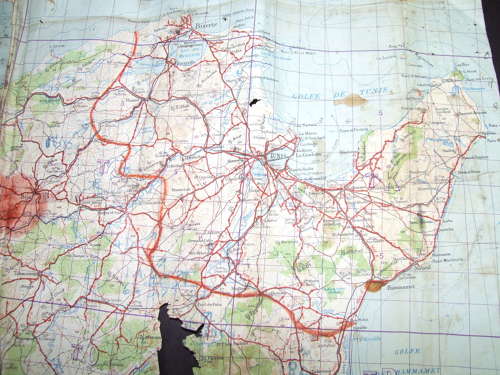 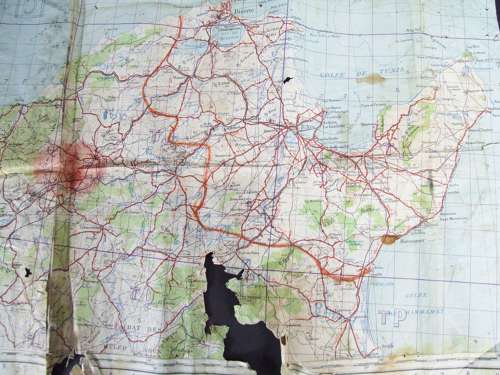 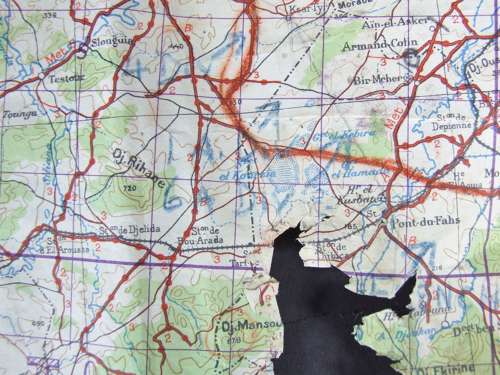 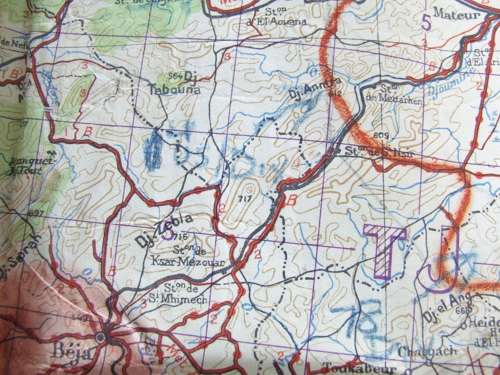 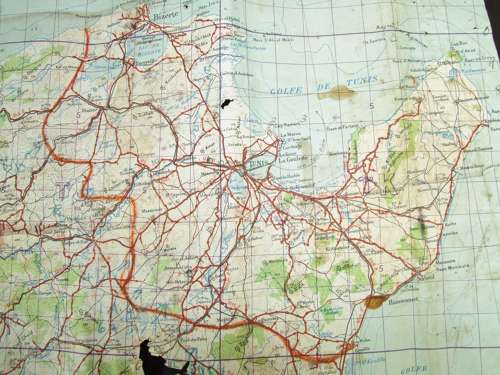 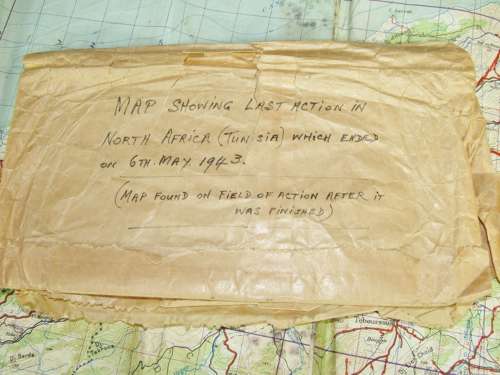 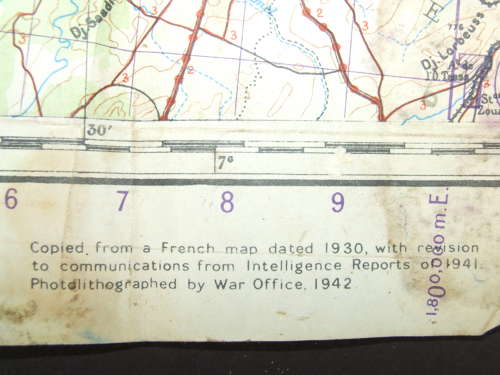 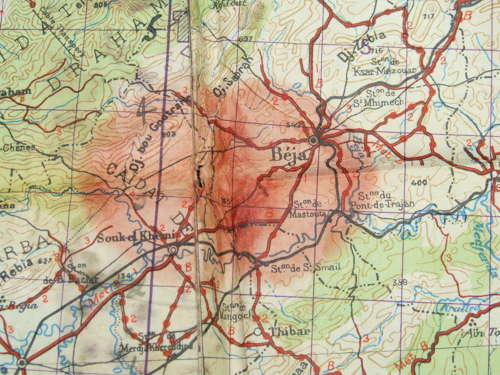 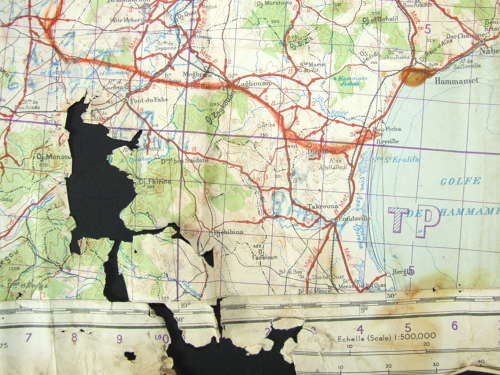 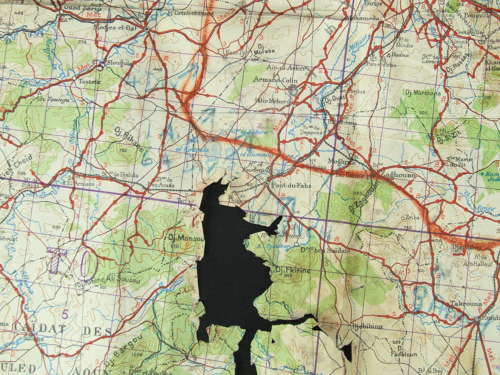 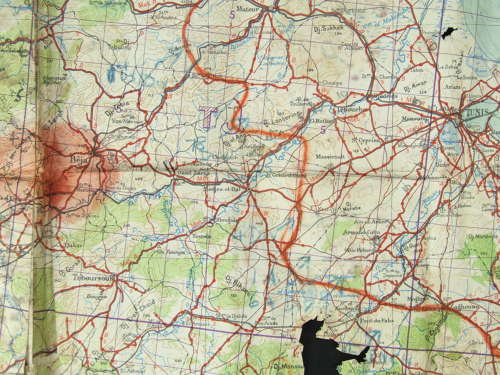 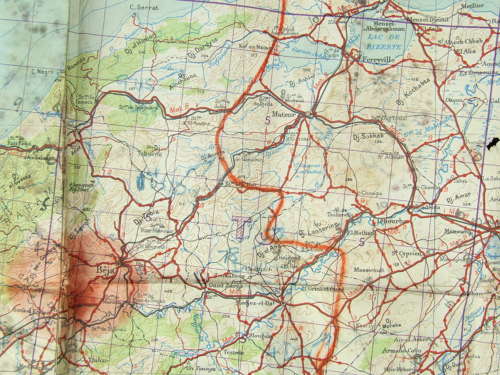 A fascinating and quite possibly unique Map showing the last action in North Africa (Tunisia) which ended on 6th May 1943, contained in a fragile brown envelope also annotated “Map found on field of action after it was finished.”

The Map is formed from the lower halves of two French maps and carries the legend “Copied from a French map dated 1930 with revision to communications from intelligence reports of 1941. Photolithographed by War Office 1942.” The area of coverage is from Algiers in the West to Cap Bon, East of Tunis in a scale of 1:500,000.

A grid reference has been created by the manual addition of numbers East and West and North and South but by far the most important additions are those relating to the assault on Tunis and Bizerte. The German defensive Line from the Gulf of Hammamet to the North African coast West of Bizerte is drawn in red crayon with the planned assault position shown in blue crayon. Some of these are quite difficult to make out but appear to be (from South to North) 8 Army, French, 6 A Div, 1 A Div, 4 Div, 1 Div (?) 78 Div, and 11th US Div.

The condition is generally poor but very readable. There are a number of stains, tears and a small area missing in the area of the French assault near the bottom of the map.

In April 1943, a major Allied air force effort (Operation Flax)  cut off Axis supplies to North Africa. U.S. II Corps, commanded by Major General Omar Nelson Bradley, surrounded the last defenders at Enfidaville, ending the Axis effort in North Africa. Operation Retribution and the control of the air and of the sea prevented any large-scale evacuation of Axis troops to Italy. The initial offensive was codenamed Vulcan.

The fighting was costly against German units in well-prepared and dug-in defences. In the advance on Tunis, the British 4th Infantry Division (British IX Corps, Lieutenant-General Brian Horrocks) was opposed by German paratroops (Fallschirmjager) of the elite Hermann Göring Parachute Division. At Cactus Far, the British infantry was faced by extensive defensive fire from well-concealed German paratroopers. Churchill tanks of the 12th Royal Tank Regiment (21st Tank Brigade), advanced without infantry support and the tanks were assaulted by the defenders using Molotov cocktails and sticky "teller" anti-tank mines. Twelve tanks were destroyed and in some cases, their crews were rescued from the burning wrecks by the Germans

On 30 April it was realized that a revision was necessary to achieve success. The revised final phase of the assault on Tunis was codenamed Strike and launched six days later. On that day, the British First Army (Lieutenant-General Kenneth Anderson), took Tunis and American troops reached Bizerte. The German commander, General Hans-Jürgen von Arnim finally surrendered on 12 May, the allies taking nearly 240,000 prisoners.