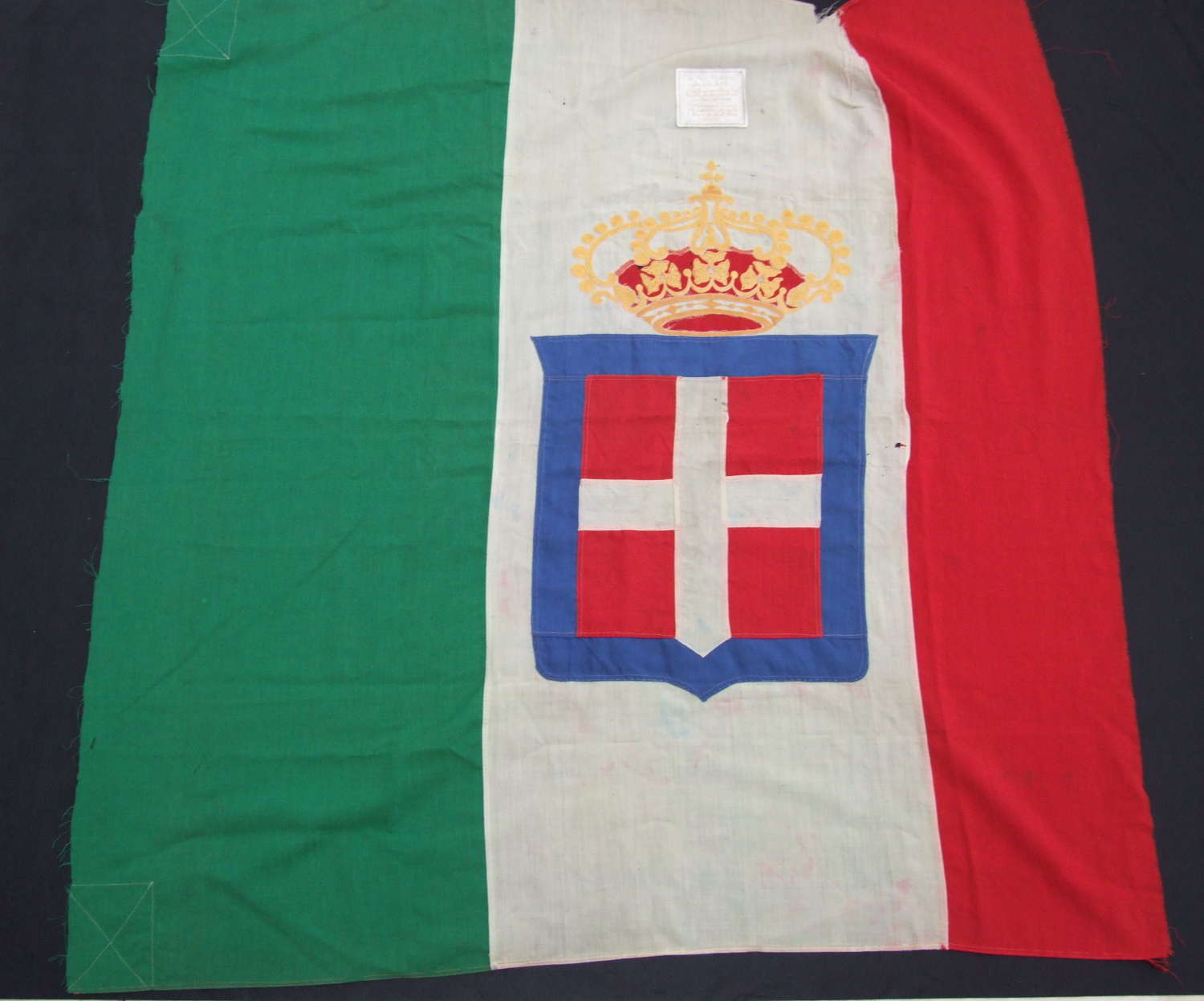 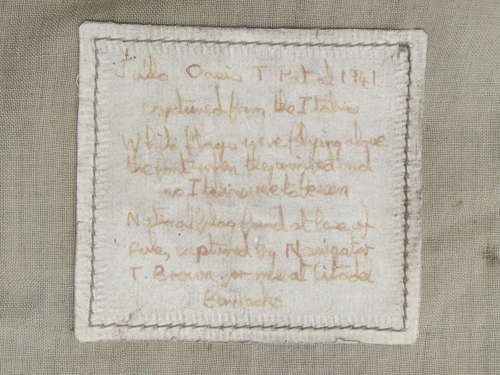 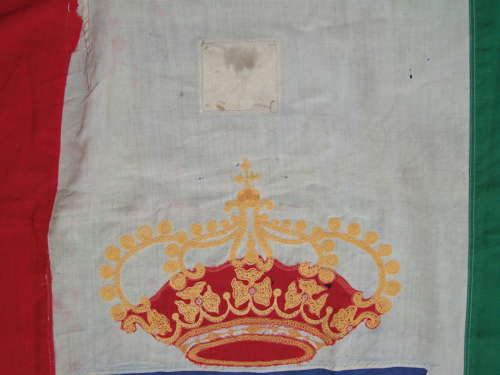 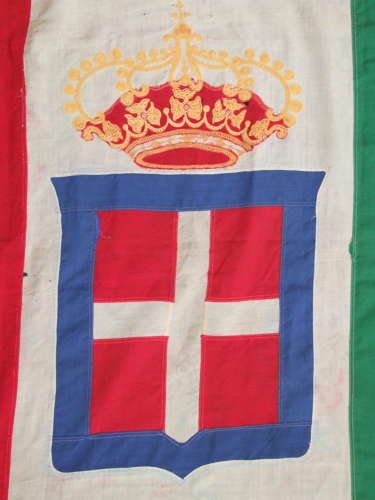 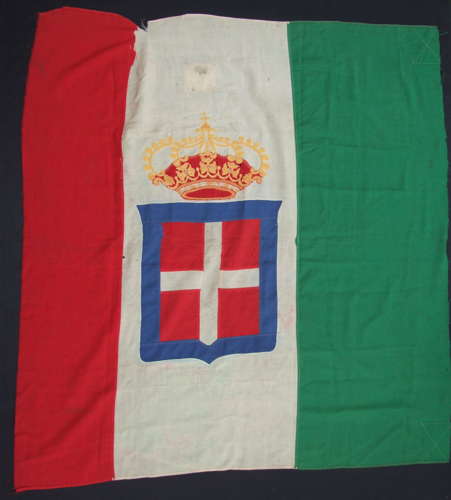 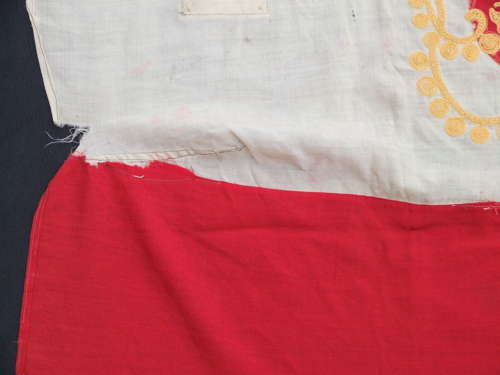 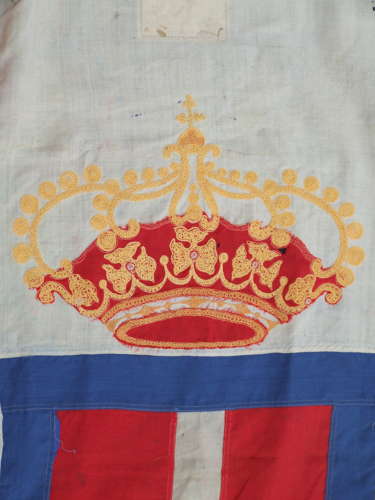 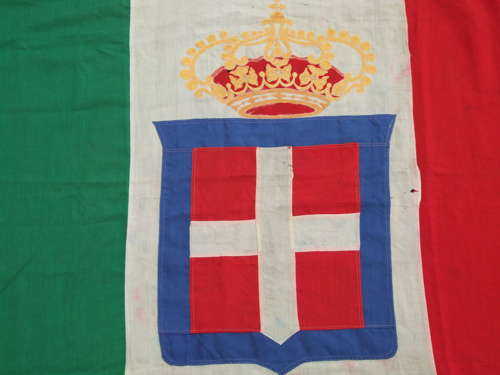 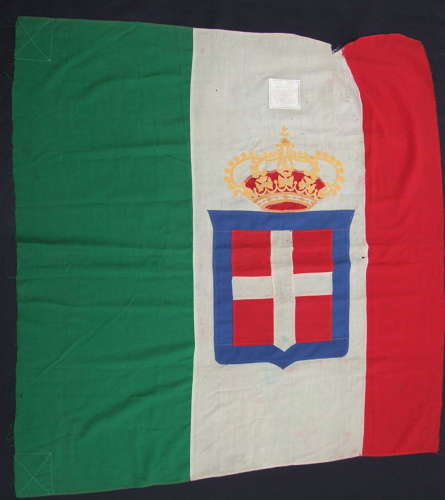 Jalo Oasis (or Jalu, or Gialo) is an oasis in Cyrenaica, Libya, located west of the Great Sand Sea and about 250 km south-east of the Gulf of Sidra.

The Flag is in generally very good condition with one repaired rip and a small number of holes. Measuring approximately 148mm x 143mm it has clearly been trimmed from it’s original size, perhaps to accommodate it’s later home at the Citadel barracks in Cairo, at one time the base of the LRDG.

“Jallo (sic) Oasis T Patrol 1941 captured from the Italians. White flags were flying above the point and no Italians were to be seen.

National Flag found at base of pole. Captured by Navigator T. Brown for me at Citadel barracks”

The events of the attack are covered well in the biography of Colonel P.A. Clayton, (founder of the LRDG) in the book Desert Explorer, an excerpt of which is included in photocopy form, some of which reads:

On 11 January, the raiding party stopped for lunch just a few miles from Murzuk and finalised their plan for the attack; Clayton would lead the attack on the airfield while G Patrol targeted the fort.

Michael Crichton-Stuart, commander of G Patrol, recalled that as they neared the Fort they passed a lone cyclist: “This gentleman, who proved to be the Postmaster, was added to the party with his bicycle. As the convoy approached the Fort, above the main central tower of which the Italian flag flew proudly, the Guard turned out. We were rather sorry for them, but they probably never knew what hit them.”

“Opening fire 150 yards from the fort’s main gates, the LRDG force split, with the six trucks of Clayton’s patrol heading towards the airstrip. The terrain was up and down, and the LRDG made use of its undulations to destroy “a number of pill boxes scattered about, including an anti-aircraft pit”. By the time his patrol withdrew, they had destroyed three light bombers, a sizeable fuel dump and killed or captured all of the 20 guards.

Meanwhile G Patrol had subjected the fort to a murderous mortar barrage, and after a brief firefight, the garrison surrendered. Clayton selected two prisoners to bring back to Cairo for interrogation and the rest were left in the shattered remnants of the fort.”

A truly historic artefact to some truly remarkable men.