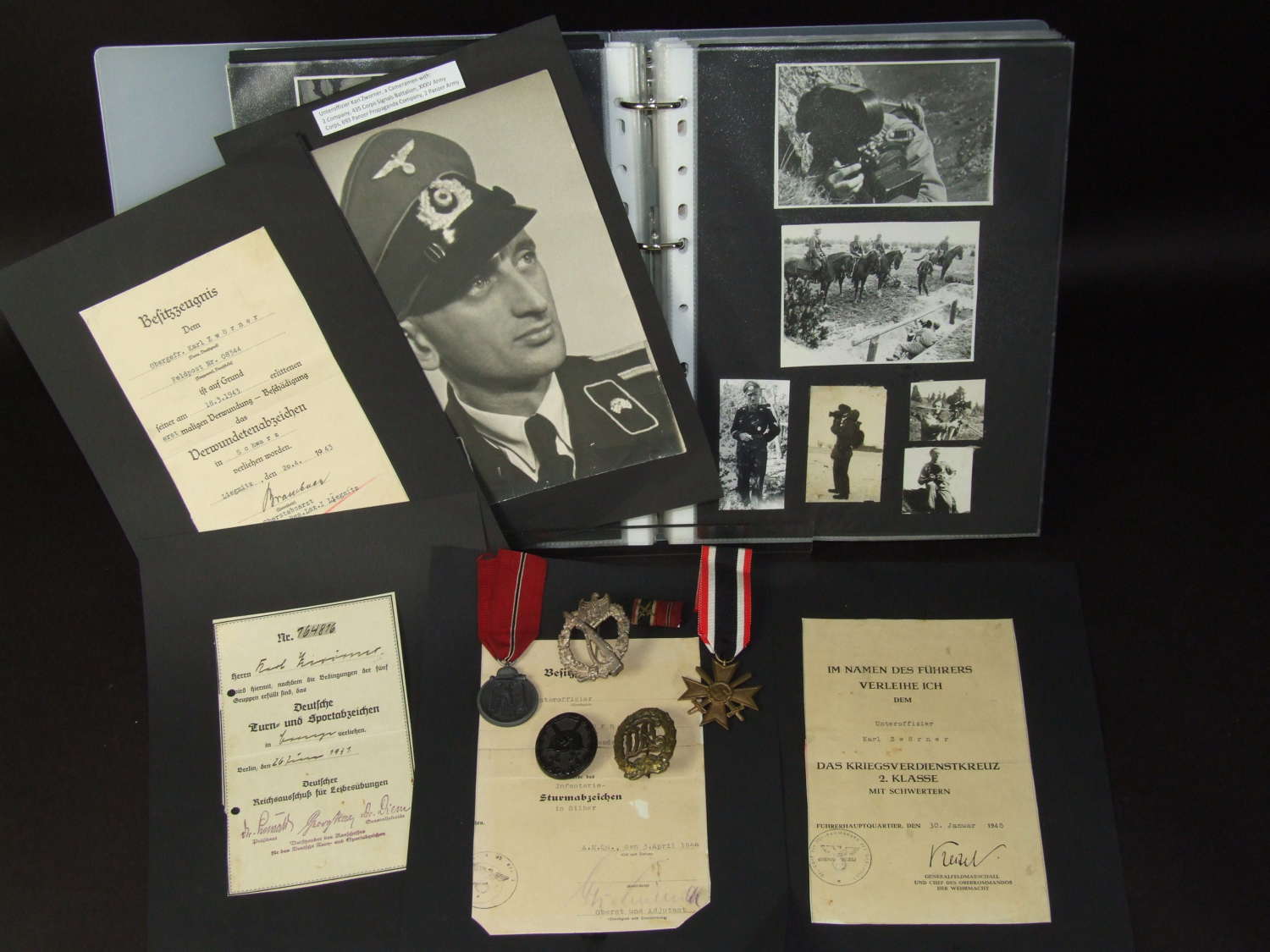 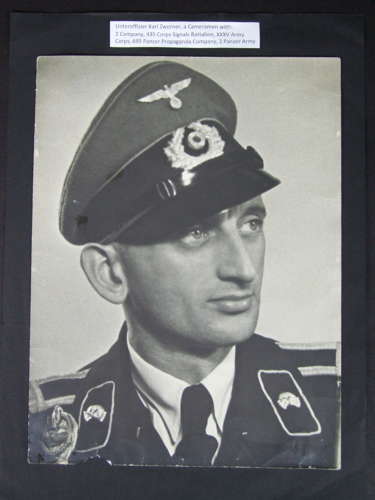 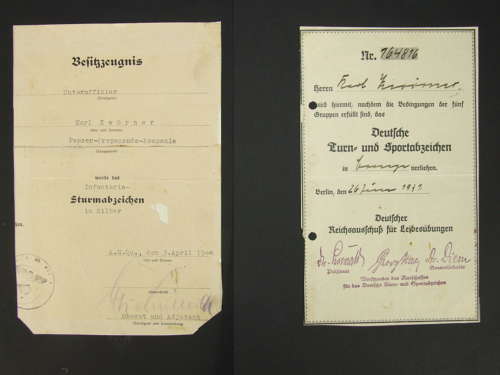 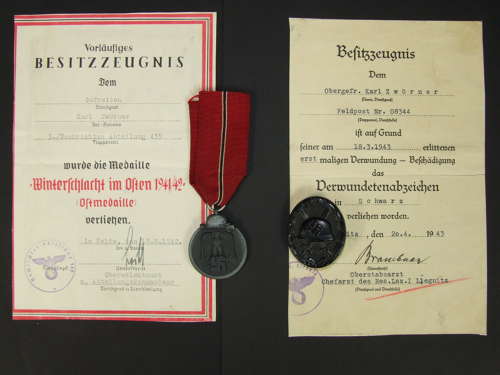 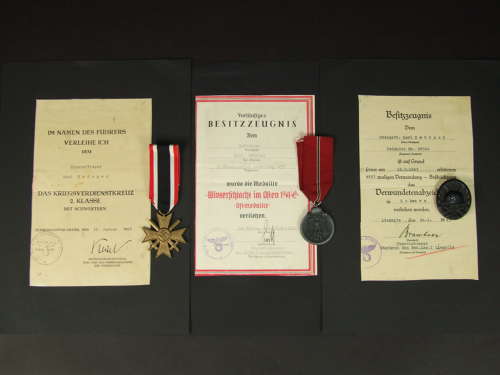 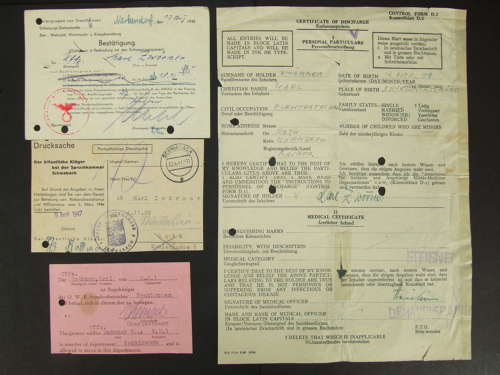 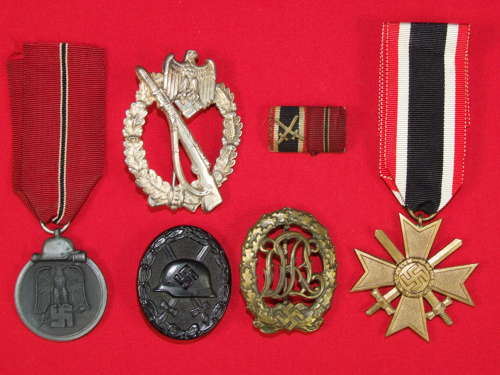 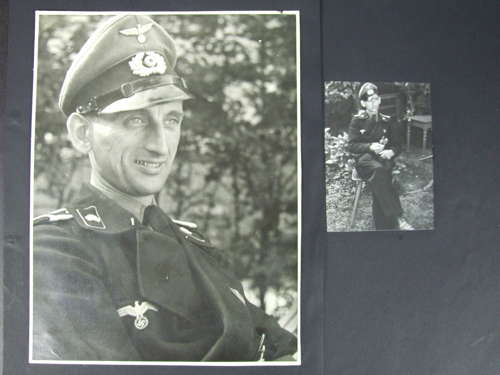 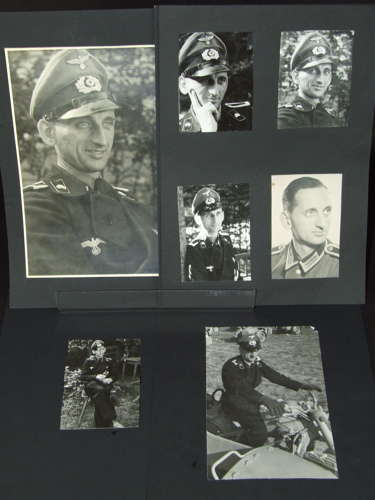 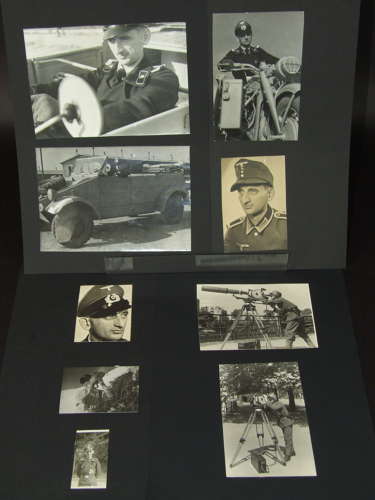 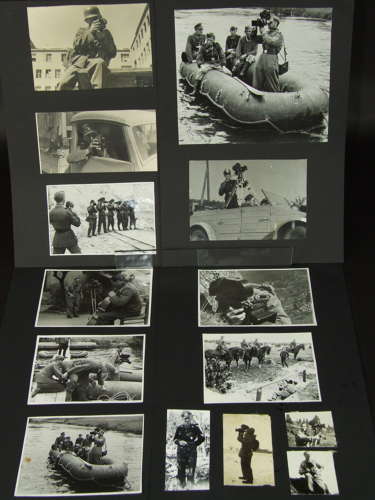 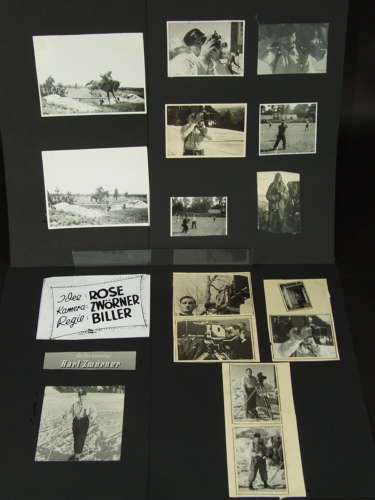 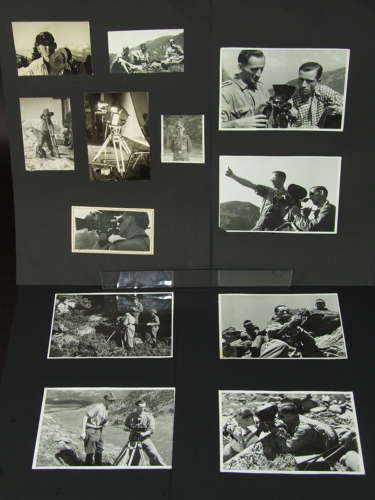 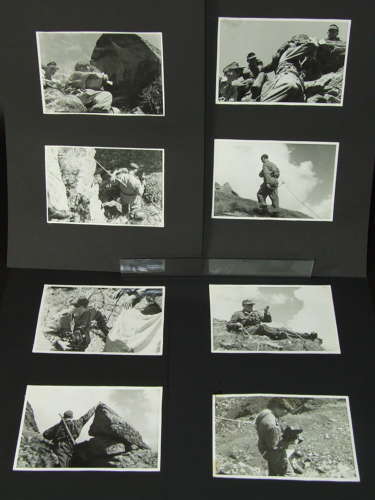 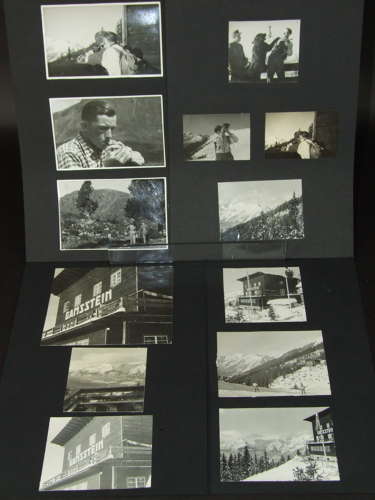 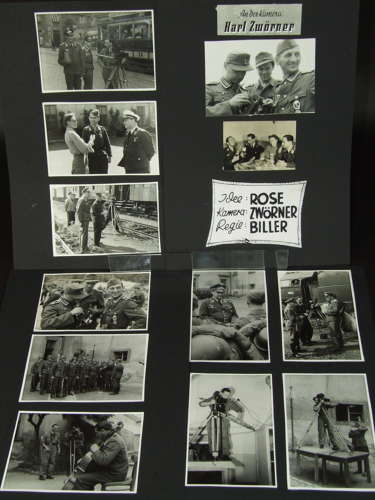 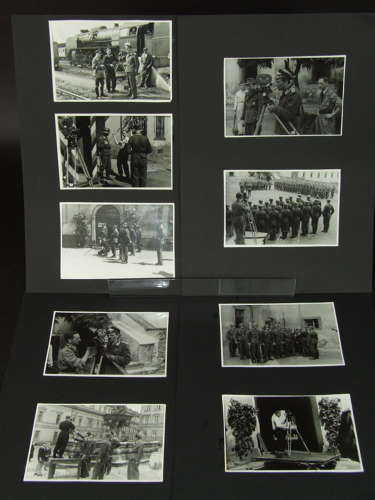 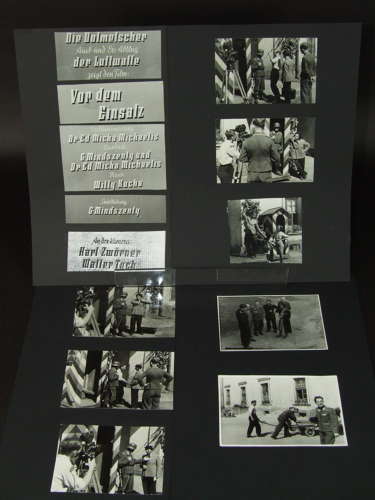 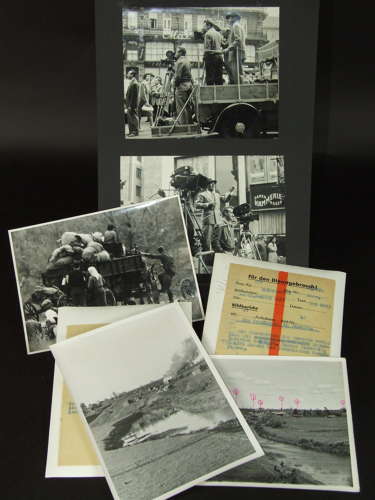 An Amazing Archive Collection to a Panzer Propaganda Camera Man

A fascinating and remarkable group of decorations, award certificates and documents to Unteroffizier Karl Zworner, 2nd Company, 435th Corps Signals Battalion, XXXV Army Corps, late 693rd Panzer Propaganda Company, 2nd Panzer Army, who saw service on the Eastern Front as a frontline Cameraman. Clearly in the thick of the action he was awarded an Ostmedaille, Wound Badge in Black for a wound whilst retreating from the Rzhev Salient and an Infantry Combat Badge in Silver.

His unit was involved in producing newspapers for the inhabitants of the area around Orel which sought to instil German Propaganda, including anti-Semitic ideas into the local population. His Propaganda Company was researched by Simon Wiesenthal who noted it’s use of Russian translators in successfully spreading it’s message. Zworner was to finish the war having covered the fighting in Yugoslavia against the local partisans and the advancing Red Army, before retreating through Hungary and Austria.

This is a remarkable and rare group of 5 award certificates, 5 decorations, 5 documents and 112 photographs which belonged to a former member of the 693rd Panzer Propaganda Company in 2nd Panzer Army. The photographs appear all have been removed from an album and have pasted or glued to a black paper as have the award certificates.

The War Merit Cross 2nd Class with Swords with its original ribbon. There is no maker’s mark or number. Very good condition.

The Ostmedaille with its original ribbon. There is a maker’s number on the suspensions ring – 127: Moritz Hausch AG, Pforzheim. Very good condition.

The Wound Badge in Black. There is no maker’s mark or number. Very good condition.

The German Sports Badge in Bronze. The badge is made by Wernstein in Jena (DRGM 85269). Very good condition.

Award Certificates, all fixed to card:

The German Sports Badge in Bronze awarded in Berlin on 26th June 1931 and awarded to him as Herr Karl Zworner.

The Ostmedaille awarded in the field on 18th August 1942 as a Gefreiter, 3/435th Signals Battalion. Signed by an Oberstleutnant and Battalion Commander.

The Wound Badge in Black awarded at Leignitz on 20th April 1943 for a first wound received on 18th March 1943 as an Obergefreiter, Fd Post No 08344. Signed by an Oberstabsarzt and Chief Doctor of Reserve Hospital 1 Liegnitz.

The War Merit Cross 2nd Class with Swords awarded by Fuhrer HQ on 30th January 1945 as an Unteroffizier. Facsimile signature of Keitel as Generalfeldmarschall and Chief of the Armed Forces High Command.

Billets, 3 May 1943 – An A4 size folder with an introduction by the Hauptmann and Officer Commanding 693rd Panzer Propaganda Company, giving details about what his Company had produced in the way of reports and photographs in covering 2nd Panzer Army’s successful defensive winter battle around Orel during February/March 1943. This folder, which contained 4 reports, was produced to commemorate these battles.

Certificate of Discharge from the Germany Army (Control Form D.2) dated 20th August 1945. Karl Zworner was discharged by the Authority of 12 US Army Group. It gives the following personal details: his place and date of birth (4th November 1909 in Friedrichsgmund), his civil occupation as an Electro-Technician, home address in Roth/Kreis Nurnberg and he was single.

An undated movement Pass. The words on this Pass are as follows: ‘The German Soldier Unteroffizier Zworner K. of W.B.1. (Wehrbezirk (recruiting district) 1) is a member of department Neukirchen and is allowed to move in this department.

Schwabach, 9th April 1947 – An official card sent out on behalf of the Public Prosecutor with the Schwabach de-Nazification Trial Court to Karl Zworner (Kohlengasse 6/Roth) stating that on the grounds of the details in his questionnaire that he was not concerned by the Law of the Release from National Socialism.

An interesting article which was printed in the Army newspaper publicising the award of the Knights Cross of the Iron Cross to a member of the Army. Its title was ‘From our Army – Anonymous Act. The Knights Cross for Oberleutnant Hans-Erich Herwig’ The very good photo of Herwig supporting this article was taken by War reporter Zworner from our Propaganda Company. This information has been underlined in red and blue by Zworner himself. Herwig was awarded this high decoration on 25th January 1943 whilst his

Regiment and Division were under command of 2nd Panzer Army. This clearly indicates that Zworner was a member of this Panzer Army’s Propaganda Company – the 693rd.

A fascinating and are collection of 112 photos of a member of a little known but nevertheless important part of the German Armed Forces – the Propaganda Arm which was originally part of the Signals Organisation until it became independent in January 1943. The collection gives a good idea how a member of this arm is employed – it shows Zworner working with his cine camera on location in the field and barracks. Some of the locations in the mountains and elsewhere would seem to indicate that the film was probably being taken whilst Zworner was in the Replacement Army – perhaps on detachment/temporary posting from the Propaganda Replacement and Training Battalion at Potsdam, Wehrkreis III.

The earliest photo is of him as a Gefreiter in Panzer uniform wearing his Black Wound Badge (this indicates mid 1943 after his award of this decoration) whilst the remainder show him in the rank of Unteroffizier wearing his Silver Infantry Combat Badge (indicates April 1944 or later after the award of this badge). There are two fascinating photos of Zworner in the front line wearing winter clothing in the snow – one taking cine pictures and the other of him holding his cine camera and standing next to a heavy artillery field gun. There is an interesting small photo of Zworner in civilian dress outside a film academy – undergoing training.

There are 14 photos (varying in size) of Zworner himself in Panzer and normal field grey Army uniform. There is a superb large format studio portrait of him in a black uniform wrap around jacket wearing his service cap (Schirmmutze) and the Panzer Marksman’s Badge. There is a further one of him in the field wearing the same uniform and you can now clearly identify the Silver Infantry Assault Badge (awarded 3rd April 1944) – this would seem to indicate mid 1944 or later.

A further interesting series of photos:

Two of him on side-car motorcycle; two of him in a VW Kubelwagen; one in a Kubelwagen with his mounted cine equipment on a tripod. Two of him taking photos in field-grey uniform wearing his decorations and the ‘Kriegsberichter’ Cuff-title. Two of him in black Panzer uniform taking cine film during a volleyball match at a Sportsfest. Three of him in a rubber pontoon boat (used to support a foot bridge) taking cine film. Three of him taking a cine-film of Army horsemen before a jump and actually jumping over him in a trench by the jump.

A series of 17 photos taken in Austria of Zworner with his cine Camera in an unknown mountain location (summer and sunshine) involving Gebirgsjager troops – you see him in a discussion, climbing with a safety rope attached and in position filming.

A series of 19 photos taken at Gammstein in Austria of Zwrorner in the mountains during winter with snow and sunshine – there are superb views of the snow capped mountains from a ski hut. He is seen skiing and taking cine film

A series of 17 photos taken in the Balkans of Zworner in Panzer uniform/denim suit working in co-operation with Luftwaffe personnel. He is filming in a railway siding among locomotives, in a city with trams and finally taking cine film of Luftwaffe troops on parade.

A series of 9 photos taken in the Balkans of Zworner in shirt sleeves in black Panzer trousers taking cine film of what would be appear to be a Luftwaffe training film involving a sentry and a civilian. The title of the film is ‘Die Dolmetscher der Luftwaffe – vor dem Einsat’ (The Air Force Interpreter – Before the Action). A copy of the Film credits list him as a Cameraman (an der Kamera).

3rd May 1943 – An introduction by the Hauptmann and Company Commander giving details about what his Propaganda Company had produced in the way of reports and photographs in covering 2nd Panzer Army’s successful defensive winter battle round Orel during February-March 1943. This folder was produced to commemorate these battles and consists of the following four reports:

b) The Combat Efficiency of the German Soldiers

A series of 11 newspapers comprising:

Karl Zworner was born on 4th November 1909 in Friedrichsgmund, his civil occupation was an ElectroTechnician, his home address In Roth, Kreis Nurnberg, and he was trained film cameraman.

Zworner was a member of the Signals Arm, (435th Corps Signals Battalion) before being transferred to the Army Propaganda Arm which gained its independence from the Signals Arm in January 1943. He would have seen service attached to 2nd Panzer Army during the winter of 1941-42 as part of Army Group Centre, particularly in the fighting around Orel, where his unit spent the better part of 18 months up until late summer of 1943. His presence during the heavy winter fighting of 1941-42 led to the award of the Ostmedaille on 18th August 1942. Serving with the 693rd Panzer Propaganda Company of 2nd Panzer Army from January 1943 onwards he would have been involved in Propaganda activity in the Orel region, attempting to demoralise Russian troops and civilians as well as boosting the moral of the Germans in the area, largely done by focusing purely on the successes of the German forces and seldom mentioning any defeats or setbacks.

The Simon Wiesenthal Centre notes the 693rd Propaganda Company was also involved in the indoctrination of locals against Jews normally through the use of local Russian translators. Those locals employed by the Propaganda Company were noted as indispensable and were not subject to Labour Service or deportation to the Reich for other reasons. One of the publications of Zworner’s unit was ‘Rech’ (The Speech) which at one time had a subscriber list of 6,000, about one for each household in Orel. The ‘Rech’ newspaper was so successful that some of its work was used as a base for Anti-Jewish Propaganda in the Reich. It is likely during a retreat from the Rzhev salient to the lines east of Orel that Zworner was wounded whilst working at the front, for this he was to receive the Wound Badge in Black at Leignitz on 20th April 1943 during his recovery.

693rd Panzer Propaganda Company continued to serve in Central Russia until September 1943, when along with Panzer Army it was moved to the northern Balkans and Hungary where it continued to serve until the end of the war. Zworner was clearly pushed into frontline service during the early months of 1944 being awarded the Infantry Combat Badge in Silver. As the war progressed it became increasingly common for non-combat soldiers to find their way to the frontline in an attempt to cover the increasing manpower shortages suffered by the German Army. It is possible that his combat service was against the Yugoslavian Partisans with whom 2nd Panzer Army was intermittently but increasingly engaged throughout 1944.

The unit was eventually pushed out of Yugoslavia with the Red Army’s Belgrade offensive that took part in the autumn of 1944 and led to the capture of Belgrade on 20th October, it then subsequently was pushed back through northern Yugoslavia into Hungary where it fought until pushed back into Austria at the end of the war. Zworner was awarded his final decoration on 30th January 1945, a War Merit Cross 2nd Class with swords