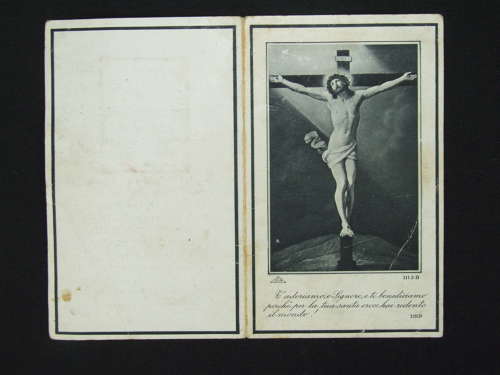 Following closely the style of the German death card with which we are so familiar, this is a scarce Death Card to Italian Partisan Franceso Barbieri who died on the 20th April 1945.

The Card is in very good condition.

At the end of April 1945, victorious Allied troops finally forced their way into the north of Italy after months of stalemate in the Apennine mountains of central Italy. To their surprise, they found not German troops in command of the major towns and cities of northern Italy, but Italian partisans. The forces of the Italian Resistance were in a seemingly impregnable position of power: they had emerged victoriously from an eighteen-month-long armed struggle against the German occupying army and Fascist Republic of Salò.

It is probable that Barbieri was one the Partisans who died during the April fighting against German troops.