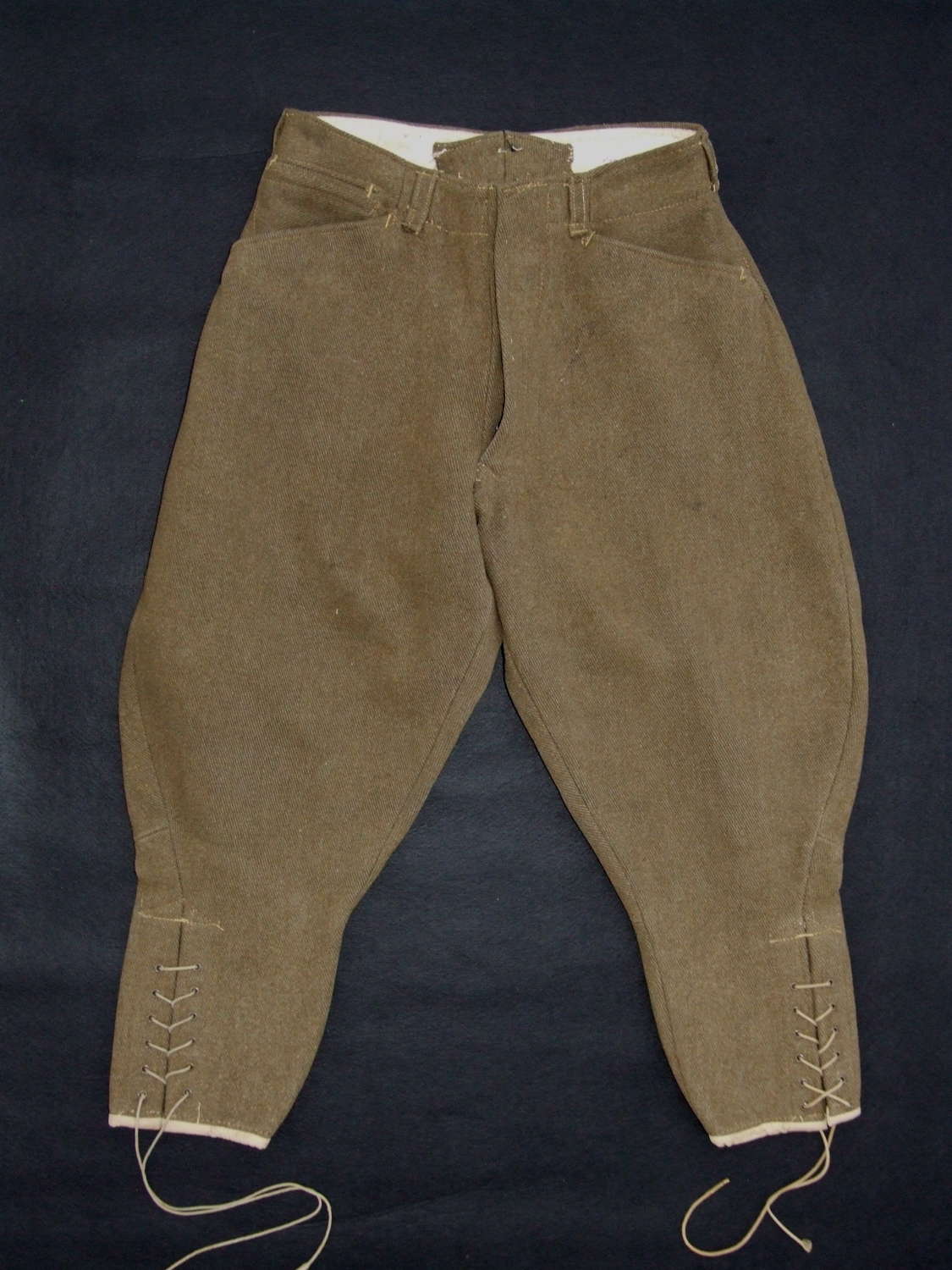 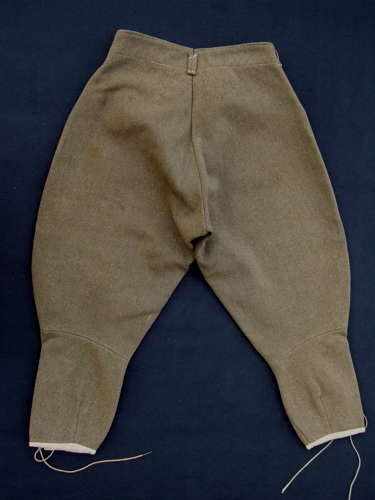 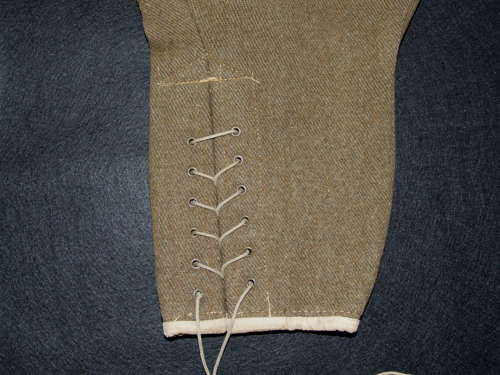 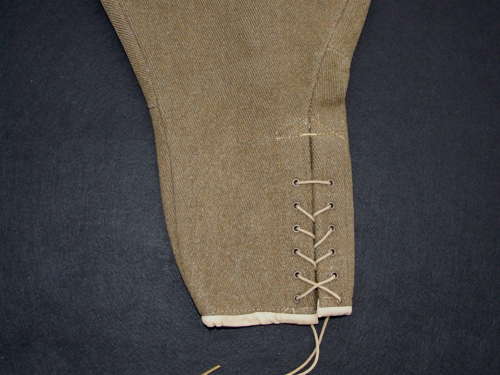 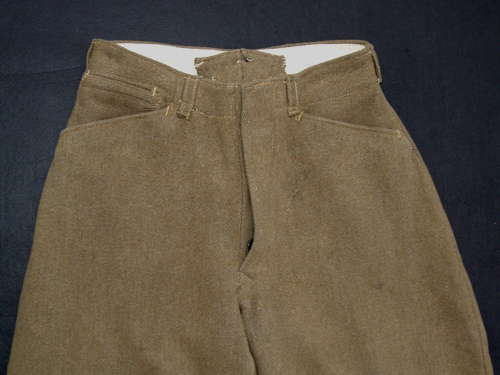 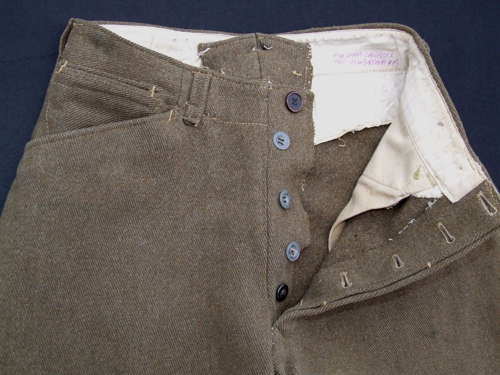 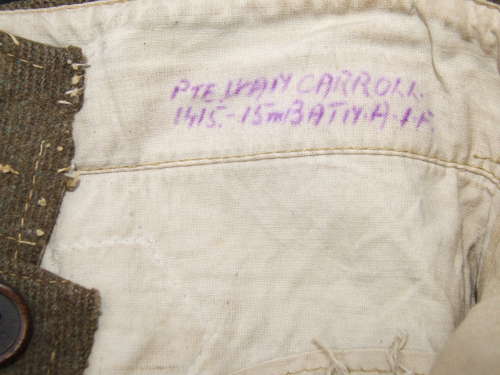 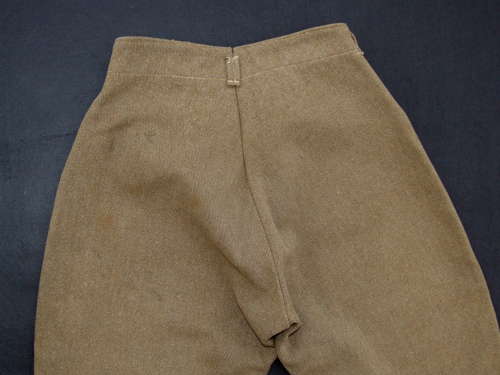 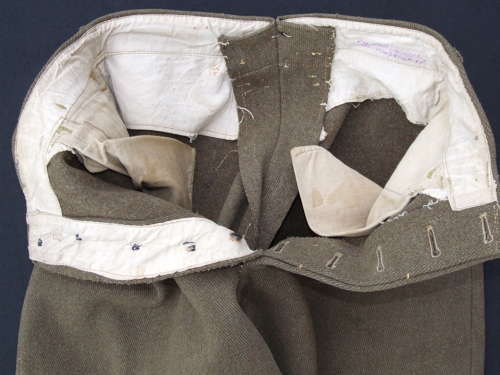 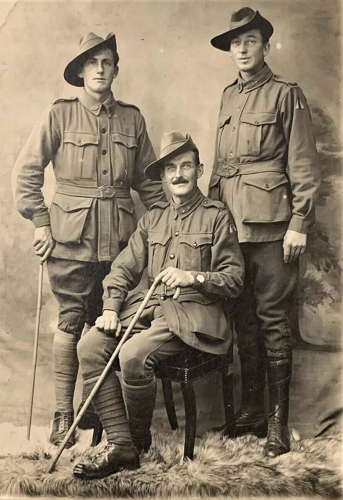 A scarce pair of British made WW1 Australian dismounted service breeches for issue to enlisted ranks.

Following the outbreak of war large amounts of Australian Army uniforms were made by various manufacturers in England given the difficulty of resupply from home. The breeches for such uniforms often vary quite widely in style from one manufacture to another however there are some typical traits associated with the type. In this regard these breeches display some classic features for these.

Very typically they are a greener shade of khaki than the average British Uniform khaki of the period, this shade being often used as it was the most in keeping with Australian made issue items.

The Breeches are also made of a whipcord type material which is much thicker than the serge used to make Australian tunics, this again being a typical feature of their uniforms.

Another appealing feature is the fact that they are not reinforced with extra material or leather between the legs. This is how WW1 Australian Dismounted Service (Infantry) breeches are supposed to be. Whist there are numerous period photos showing Australian Infantry wearing Breeches that do not follow regulations and have reinforcing there are many more photos that do show them wearing this correct non-reinforced Dismounted Service type.

Lastly, the legs of the breeches do up with laces instead of buttons. Whist again it is the case that Australian issue breeches of the period can do up with either laces or buttons it is widely recognised that leg closure with laces is by far the most common trait, this as testified by the Australian War Memorial collection.

As is standard for all WW1 British manufacture the Breeches are lined with white cotton and have simple tin buttons. Less commonly seen however they also bear the British manufacturers’ variations for Australian Breeches of a watch pocket, plus an adjustment strap to the rear (now missing).

The breeches have a large amount of service wear but remain in good condition They have been taken in at the rear at some time which I assume is when the rear strap was removed. The taken in material has not been cut away  and  close inspection reveals the breeches have been worn both before and after the alteration. Most of the buttons  have been re-sewn during their service life and the top fly button has been replaced by what appears to be a WW1 Australian tunic button made of horn. The buttons usually applied to the waistband for fastening braces have been removed altogether and replaced by very narrow “belt” loops presumably to secure a thin leather strap or a piece of rope. Rather nicely in this regard, the WW1 Australian Breeches forming part of the uniform famously obtained in the line from Private Giles 29th Bn AIF and now held by the Australian Memorial Collection, bear just such a modification of narrow belt loops being added. (Images of Private Giles’ Breeches are accessible online).

Finally, the lining to the waistband bears an Australian soldier's name written in indelible pencil.