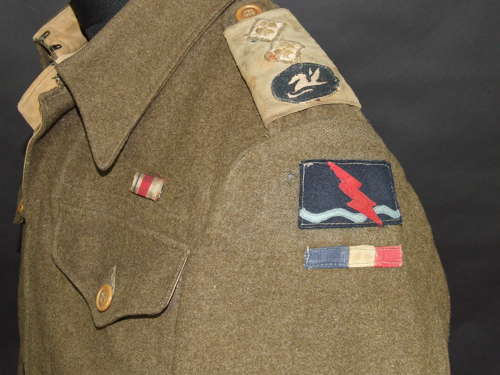 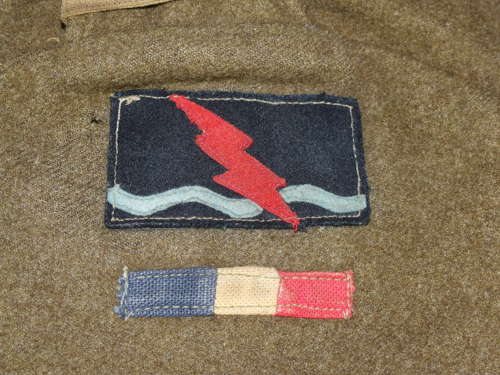 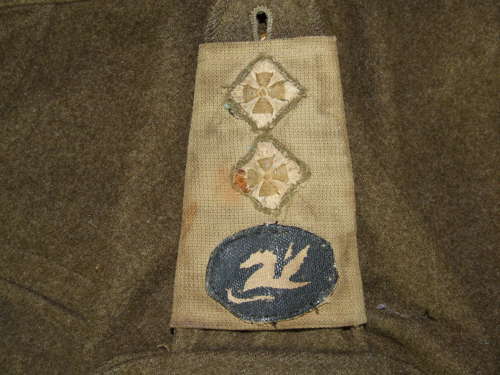 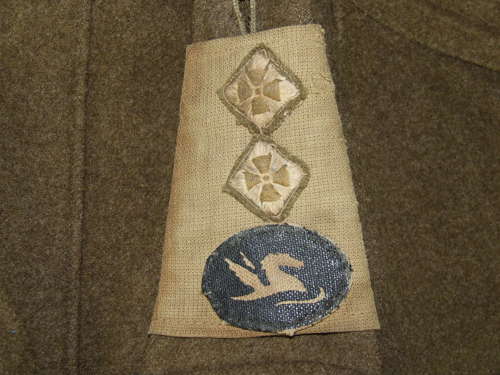 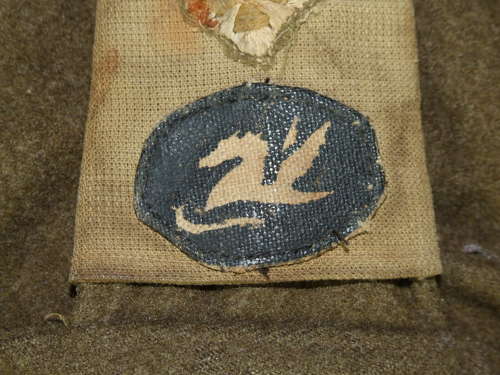 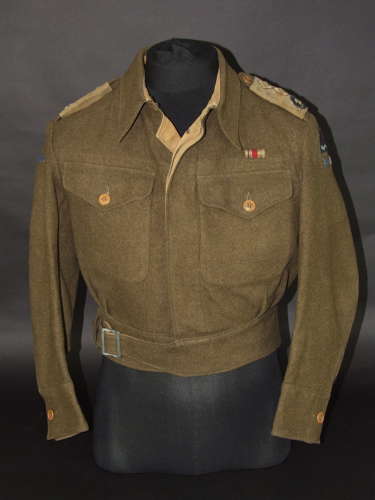 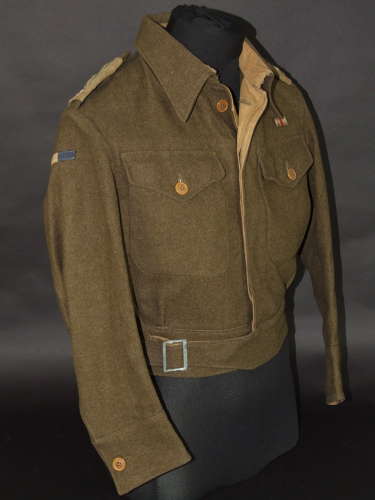 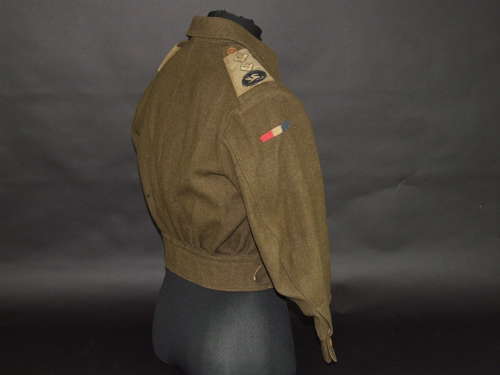 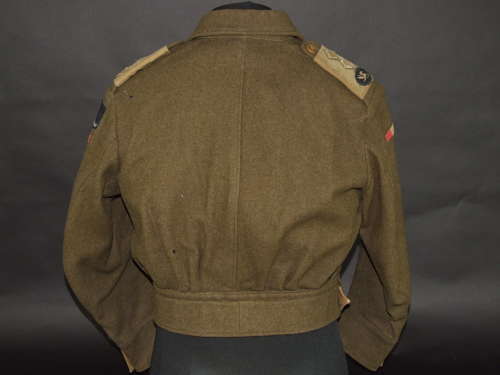 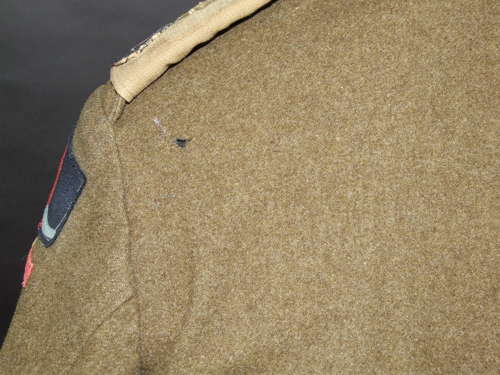 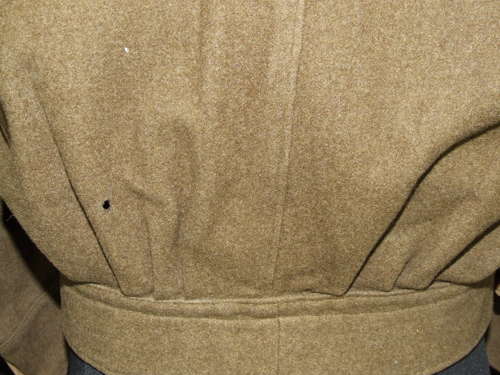 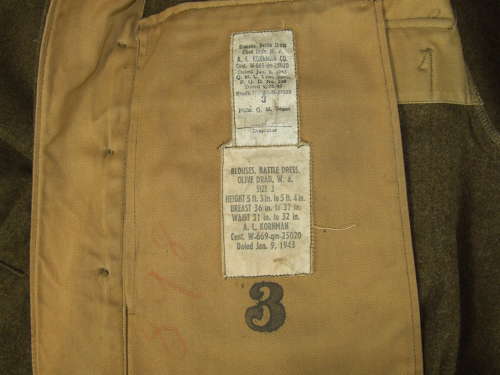 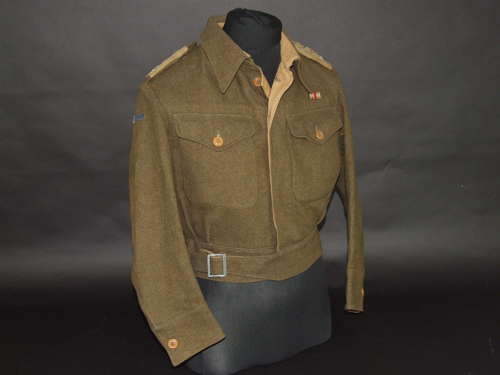 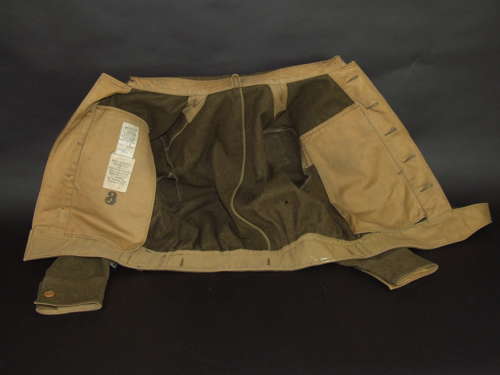 Another from the superb Long Range Desert group collection is this Battledress Blouse. Formerly part of the Jon Mills collection the Blouse itself is a 1943 dated American made War Aid example often seen issued to troops in the Northern Mediterranean theatre. It is in very good condition with just two or three moth holes which I have shown in the images.

What of course make the Blouse outstanding is the exceedingly rare insignia worn by The Land Forces Adriatic, the formation sign on the left sleeve being the only known example and is the very one shown on Jon Mills’ “Badges on Battledress”, on page 544.

On page 543 (with credit to Jon Mills) he says of the Raiding Forces Middle East “By the time the Germans surrendered in North Africa on the 12th May 1943, the desert Special Forces which had contributed to the victory had been reorganised as Raiding Forces Middle East, their future role uncertain. Formed at the beginning of April Raiding Forces included the Long Range Desert Group, the Greek Sacred Squadron, and 1st SAS - no longer commanded by Major David Stirling who had been captured in January – and shortly to be divided to form the Special Raiding Squadron and the Special Boat Section. Serving alongside these Special Services on subsequent operations in Italy and the Adriatic were the Royal Signals Personnel of Raiding Force Signals who wore their own Arm badge and provided rear link detachments for the unit” This is the Formation Badge shown on page 544 of his book and the very one sewn to this Battledress.

As well as the pips to a Lieutenant, each shoulder strap slip carries the Formation Sign of the Land Force Adriatic.

The following is an extract from an article which appeared in the July 2015 edition of The Formation Sign Journal of the Military Heraldry Society regarding Land Forces Adriatic and its formation sign.

A DYING DUCK IN A THUNDERSTORM

Formed in June 1944, LFA a planning and co-ordinating HQ ‘for trans-Adriatic special operations’ commanded all land and special raiding forces formerly part of Force 266, a Middle East offshoot of SOE formed as a result of the increased military commitment in the Adriatic. Based at Bari in Italy its primary task was to support the partisan forces of Marshal Tito in Bosnia and Montenegro.

LFA was commanded by Brigadier GMO Davy, an officer of the 3rd Hussars, described by Donald Hamilton-Hill, an SOE officer serving with LFA as a man with ‘a penchant for publicity and ideas of desert leap-frogging in operations’.

The white horse of Hannover within a blue garter taken from the officers’ cap badge of the 3rd Hussars were incorporated in the new formation’s badge, but as LFA operated across the Ionian and Adriatic seas, ‘carried sometimes by air but more often by sea’ the white horse was given wings to represent a swimming Pegasus climbing onto dry land. Drawn in watercolours by Brigadier Davy, a local Italian cloth maker produced ‘a somewhat inadequate stencil’ from which a two inch square was cut. Comments from other formations were not complimentary; ‘What the hell’s that on your shoulder? A dying duck in a thunderstorm?’ or ‘That duck was badly shot – where’s the Labrador?’

A 6th September message from HQ LFA noted that ‘a formation flash [sic] will be taken into use forthwith by all units under command’ - three pairs for officers, one pair for ORs - its distribution list recording LFA’s units: HQ Vis Brigade, HQ, Raiding Support Regiment, HQ, LRDG (A&B Squadrons) HQ, Special Boat Section, LRDG Signal Squadron plus C Coy, 2nd HLI and Rear HQs, 111 Field, 31 LAA and 64 HAA Regiments, RA and 579 A Field Coy RE. Interestingly 2nd Special Service Brigade, also under command was not to wear the sign. C Coy, 2 HLI wanted nine pairs for officers, 35 pairs for ORS, the SBS 165 badges, as ‘this represents the requirements of those members of the unit at present in CMF’. Distributed on 16th September officers were to wear them on the arms two inches from the shoulder ‘attached to the shirt preferably by press buttons’,

ORs ‘fastened to the shoulder straps by a piece of tape fastened to each side and looped underneath’... ‘the means of easy attachment and detachment is necessary as the flashes will not wash satisfactorily’.

An extremely rare and significant battledress Brouse to one of the lesser known Special Service Units.