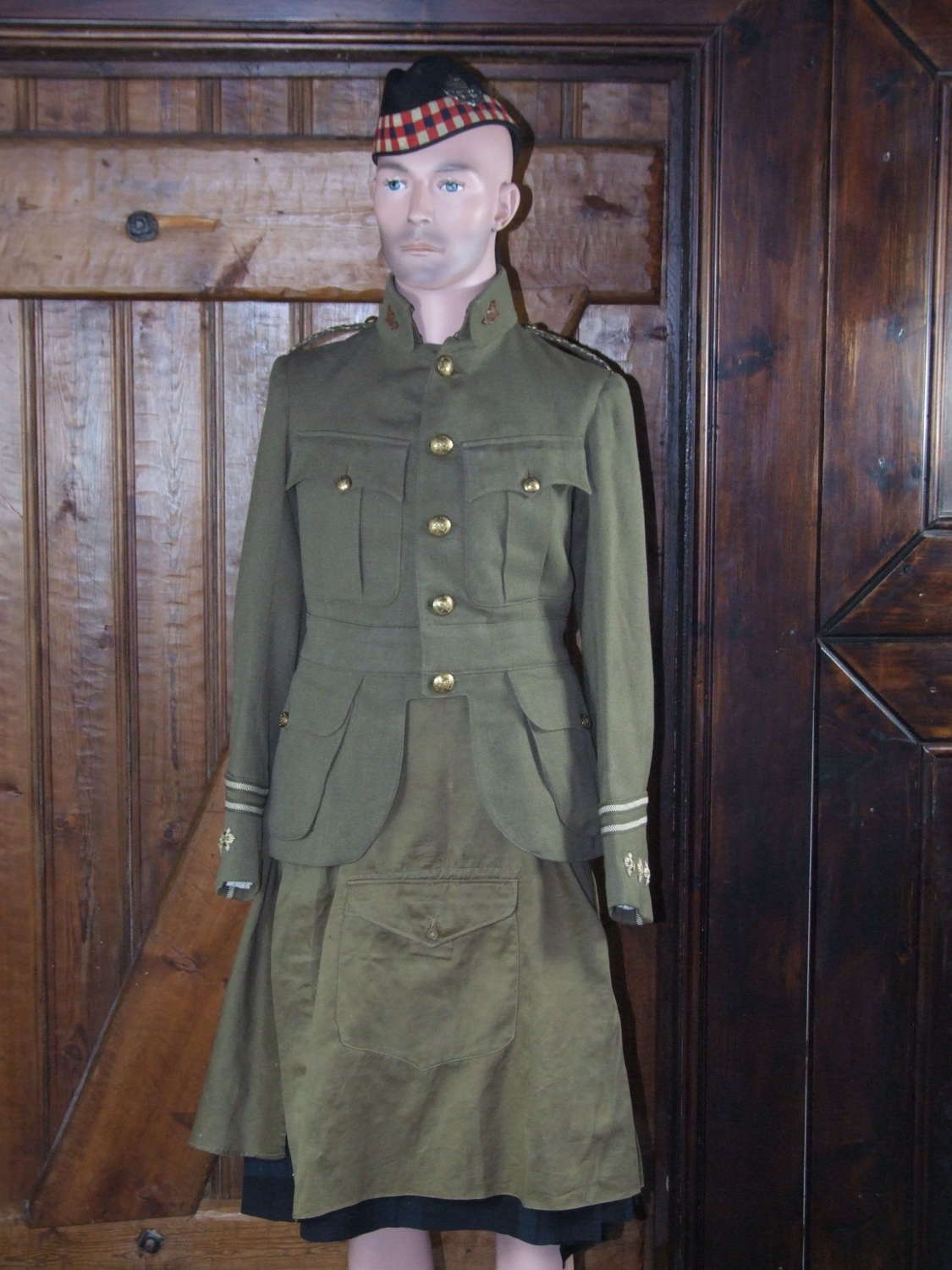 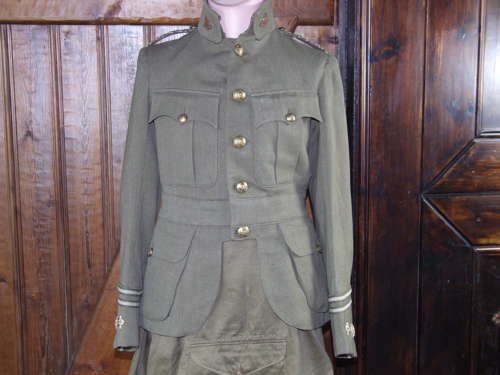 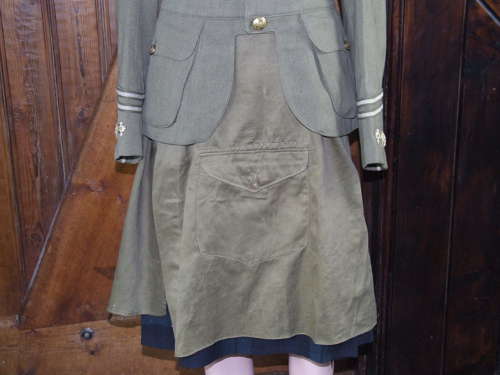 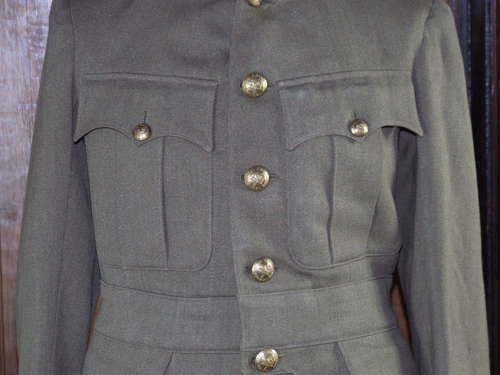 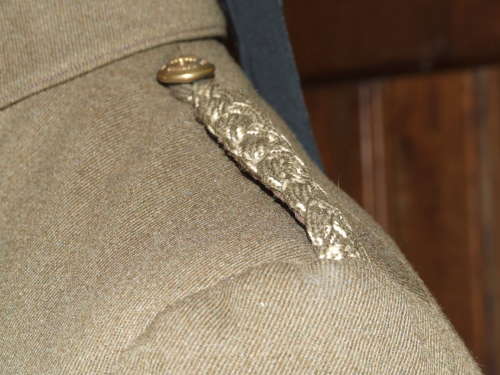 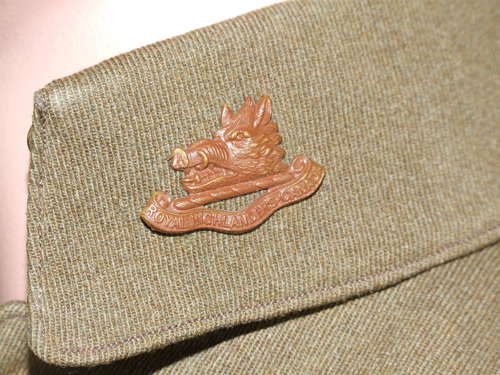 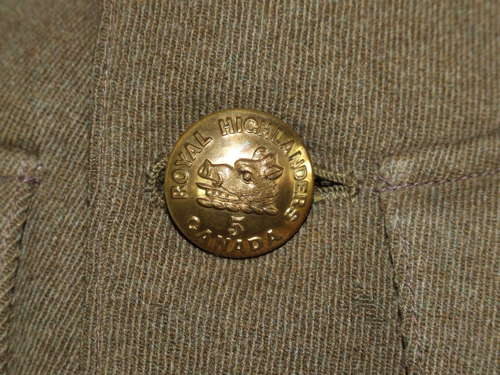 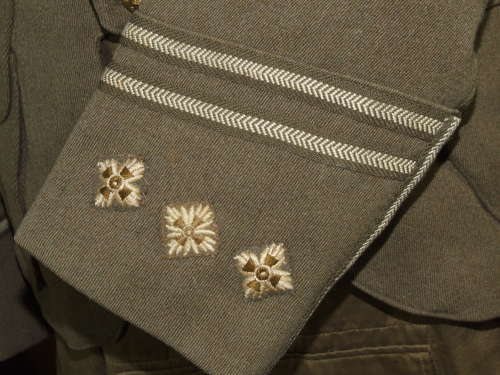 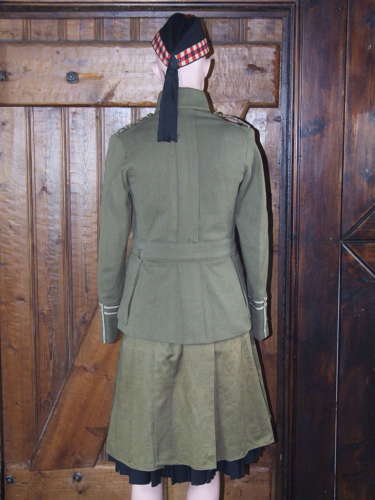 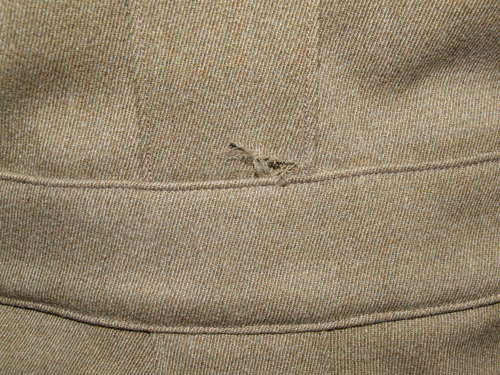 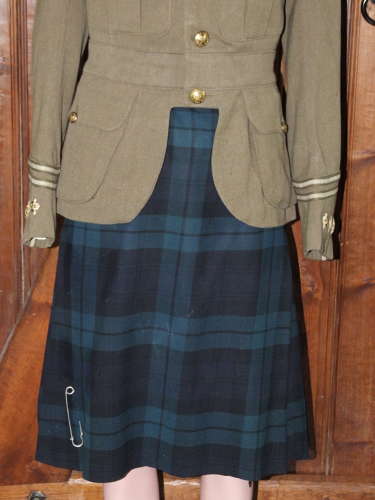 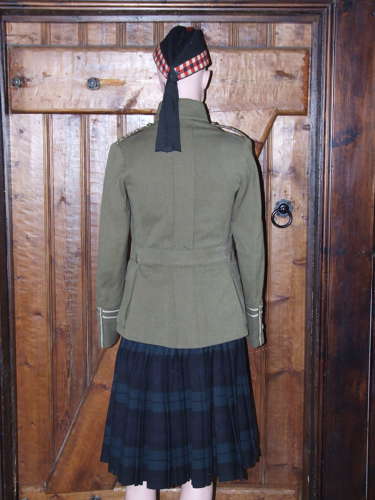 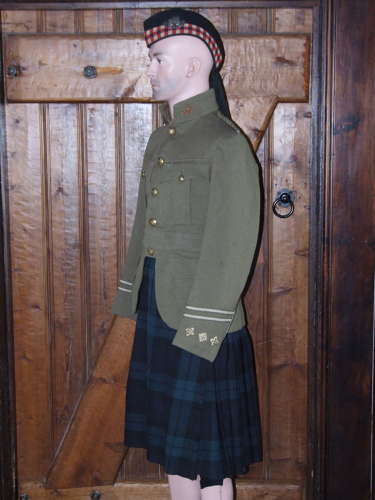 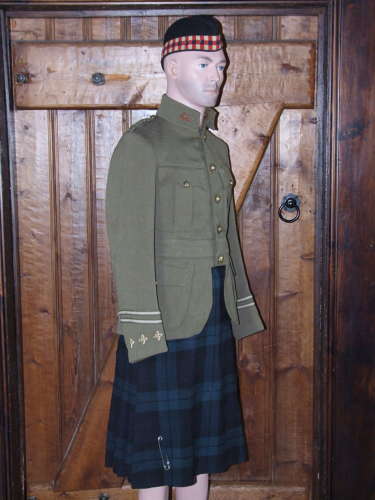 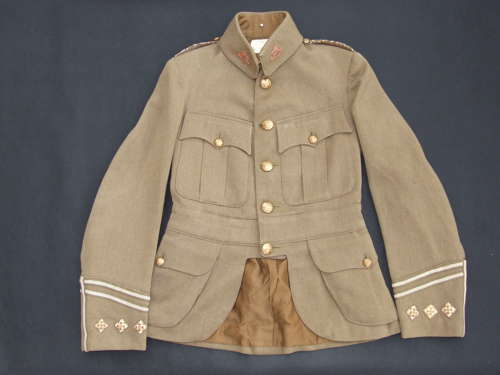 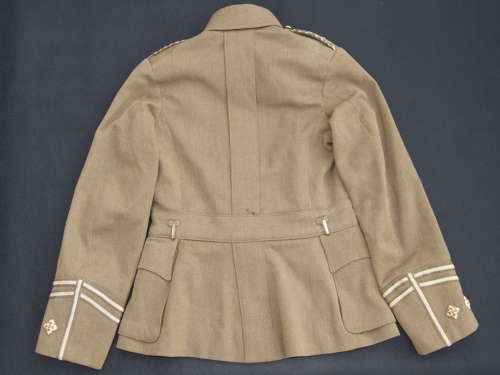 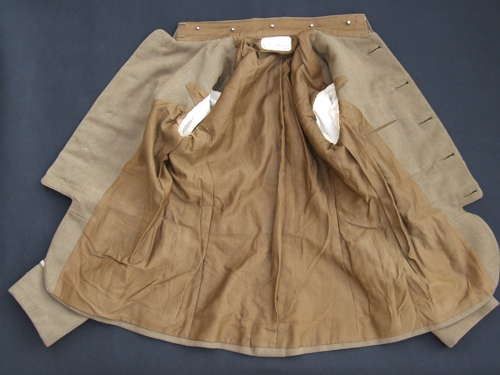 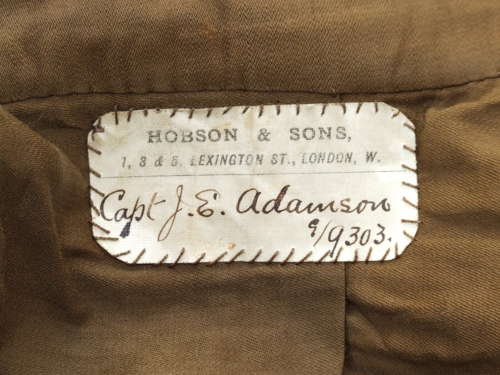 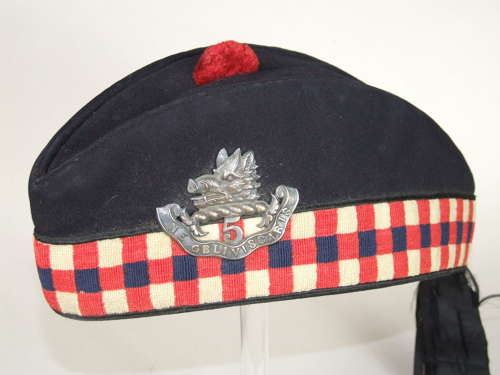 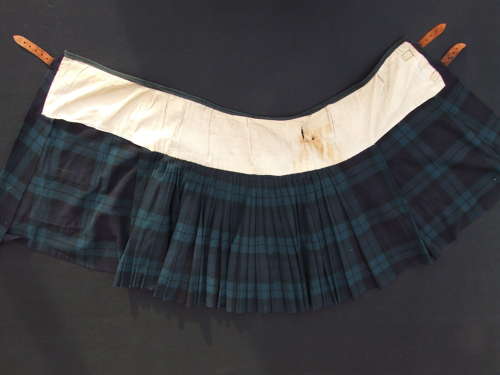 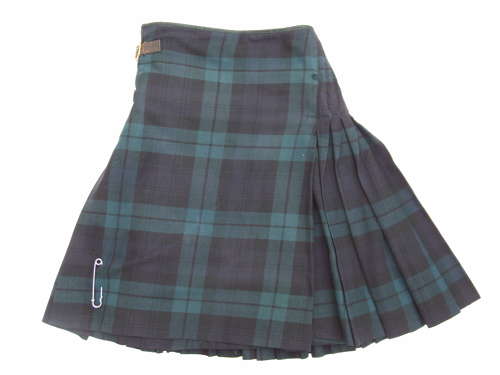 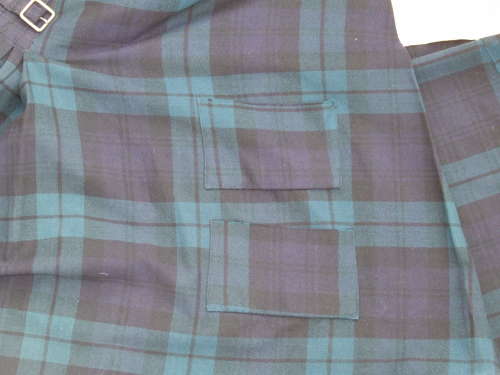 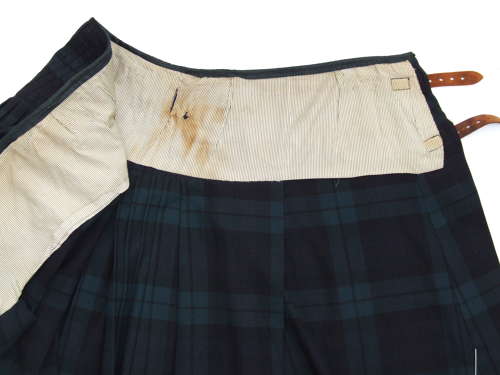 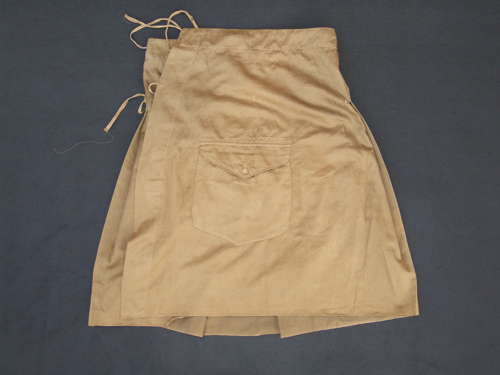 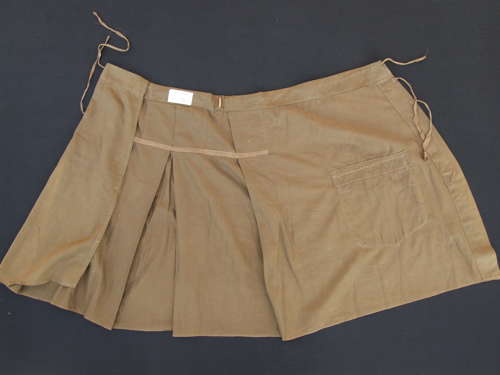 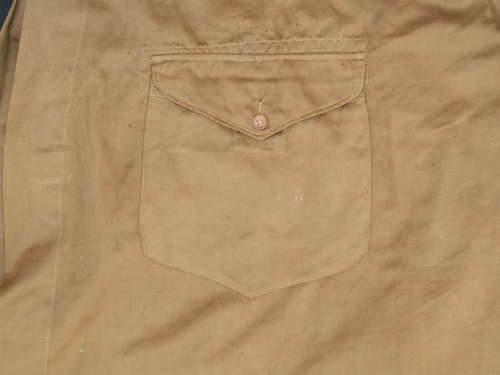 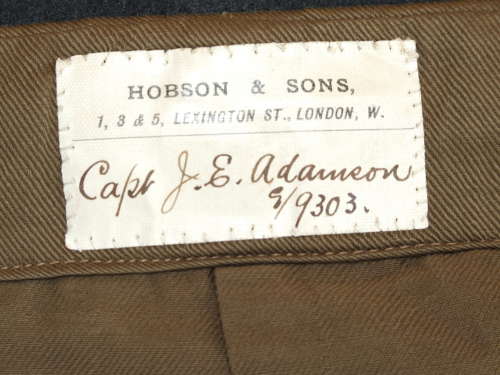 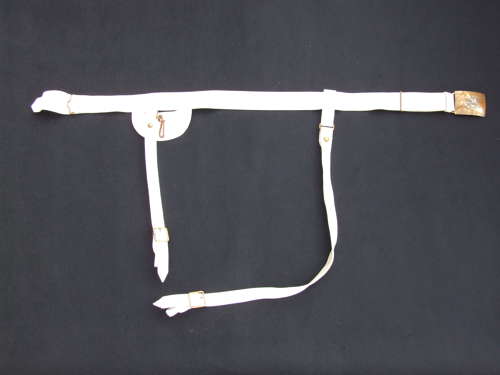 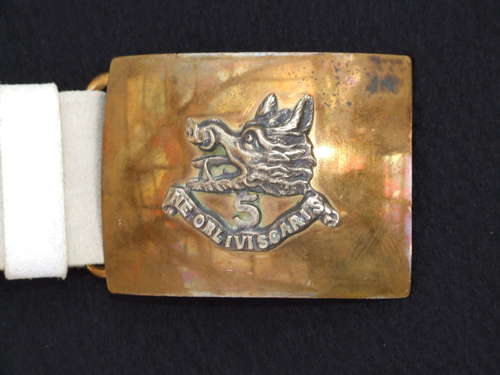 Although a territorial unit, volunteers from the 5th Royal Highlanders were sent to the Western Front and I believe Captain Adamson was amongst the three drafts sent out since both his Doublet and Kilt Protector were purchased from Hobsons and sons in London. Whilst included copies of annual drill pay lists from both 1909 and 1913 show him as a Lieutenant, his Doublet is ranked to a Captain with clear signs of the third rank pip having been added after 1913. Furthermore, there are aspects of his uniform which clearly support my view.

The Doublet is of the Scottish style rather than Canadian and is tailored in gabardine as one would expect. The collar is the earlier style high collar with photographic evidence of 20 Canadian officers at the front (see forces war records  galleries) where 13 are wearing high collar Doublets. The bronze collar badges show the Boar’s head of the the Royal Highlanders Canada, these the pre war type for Adamson’s regiment and presumably taken with him to wear as prestige pieces. Shoulder straps are of the early woven variety.

Each sleeve has a false French cuff and the appropriate rank insignia for a captain.

Overall condition is very good with a small cut to the material on the centre rear pleat just above the belt line.

The Kilt is no less pleasing, free from any damage and with some interesting points. The leather straps and buckles of the very distinctive type introduced only in 1914 for the 1914 Pattern Leather equipment. There are also two open patch pockets added to the front for carrying field dressings as British Tunics altered for use by Scottish regiments in wartime lost their dressings pockets with the Scottish style cutaway.

This is clearly a Kilt intended for wear in the field when of course no Sporran would have been worn. Several names are evident at the waist band, non discernible, but one to a Lt. Col.

The Glengarry is in very good condition with some shredding to the ribbons, one moth hole to the main body and five or six to the dicing.  The Badge is of slivered brass badge and there are no stampings to the lining.

The buff leather Parade Belt is complete, in very good condition and with the Boars’ Head Buckle.

Finally, and of great importance is the Kilt Protector. Extremely rare and only approved for wear in the field this piece is in very good condition and again carries this officer’s name on the Hobson & Sons label. One of the securing tapes is missing.

A superb collection of items to a pre war Canadian officer who no doubt saw service on the Western front.