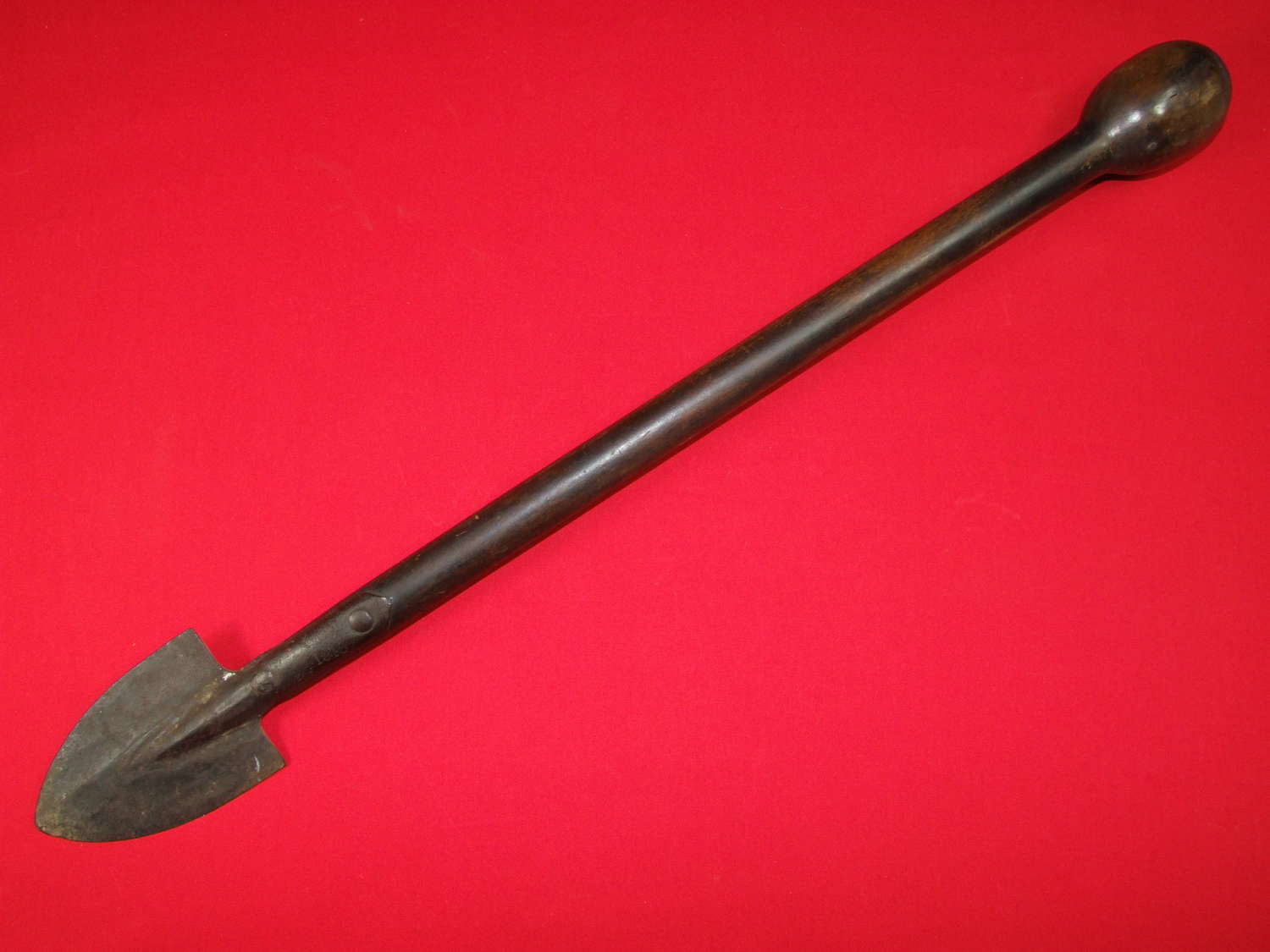 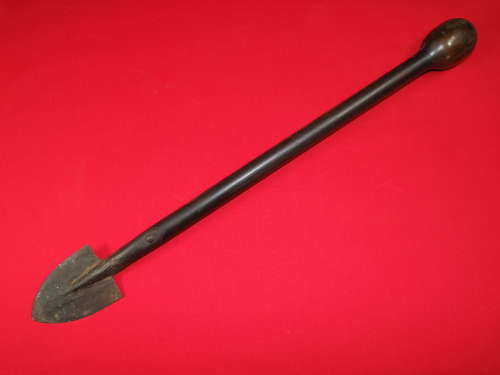 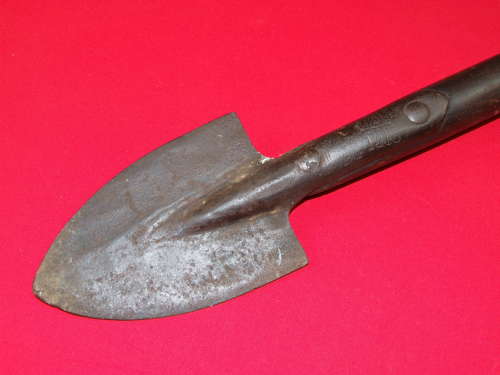 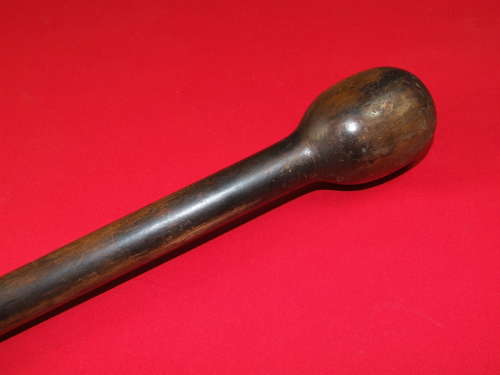 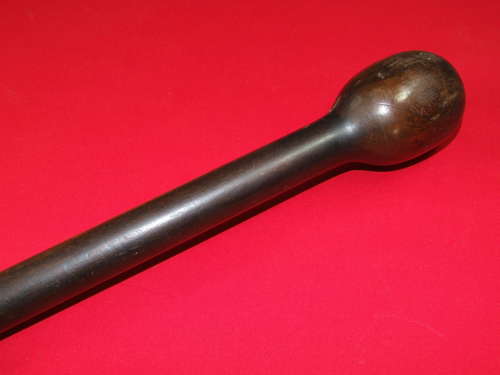 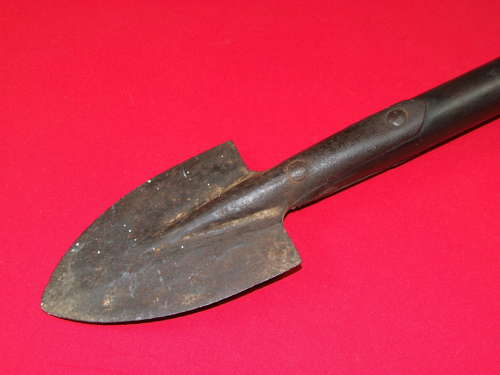 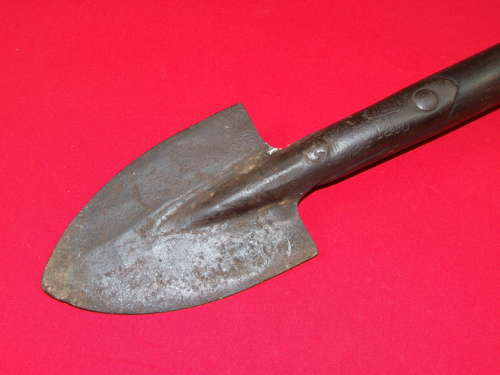 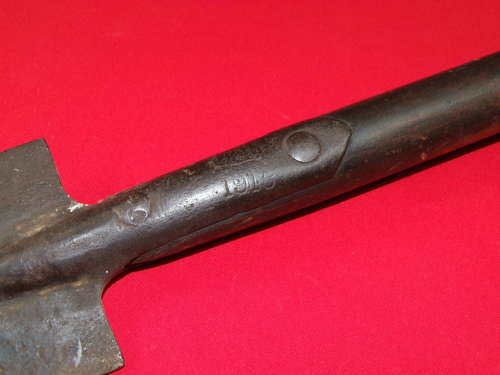 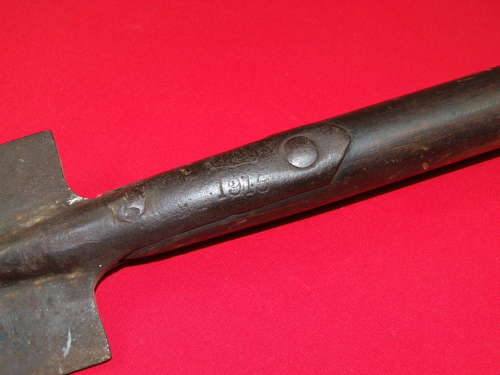 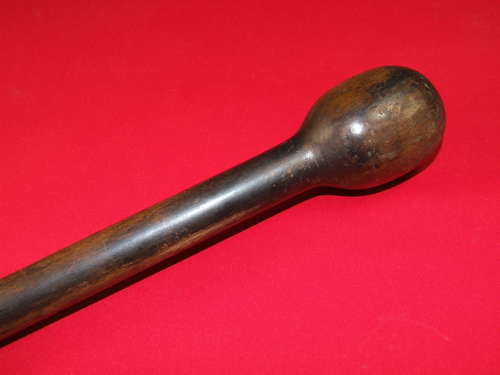 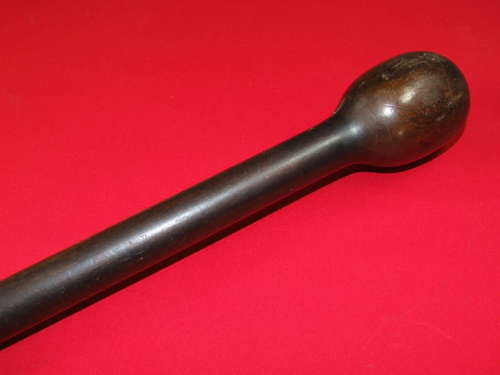 Used by the British Army Tunnelling Companies which played such an historically important part on the Western Front, this incredibly rare piece is in very good condition measuring 780mm from the tip of the tool to the bulbous end of the wooden shaft. The metalwork is nicely dated 1915 where this joins the wooden shaft, the shaft in turn is just as pleasing with no damage or woodworm of any kind.

It is perhaps fitting that this 1915  Digging Tool is the first of a small collection of rare items relating to the Royal Engineers Tunnelling Companies of World War One.

The  Tunnelling Companies were special British Army underground warfare units first formed in February 1915 in response to the war on the Western Front having become bogged down into stalemate siege-like conditions. Since both sides now faced the difficult task of breaking through the enemy’s well entrenched defensive positions, it wasn't long before each remembered an ancient art of war and used it most effectively: mining under the enemy lines, placing explosives and blowing them up.

The blowing up of mines below enemy front line positions very soon became a regular feature of local actions throughout the Western Front. Infantry tactics were then developed which would enable the rushing and capture of the crater formed by the explosions. Mining in support of larger infantry offensives was also adopted, with increasing numbers of mines of increasing size being used in the first minutes of the major British attacks at Aubers Ridge (May 1915), Loos (September 1915) and most famously the Somme (July 1916). Mining warfare reached its absolute zenith in June 1917 when 19 huge British mines blew up under the Messines Ridge. The Messines craters still exist today and are now deep pools. Tunnellers of the Royal Engineers had dug from 1500 feet from behind the British line to reach this strong point under the enemy trenches. 49500 pounds of explosive, mostly ammonal, buried 57 feet below the surface, blew at 3.20am on 7 June 1917.

The combined blasts killed as many as 10,000 German soldiers instantly, with another 7000 stunned and subsequently captured.

Once both sides had embarked on mining operations, there was a determined struggle for tactical superiority in those areas where conditions were favourable. When the front lines were relatively close together and the geology suitable for tunnelling, the mining companies sought ways to not only drive mines for destroying enemy positions but developed measures of detection of the enemy mine systems. When detected, an enemy mine would be immediately destroyed by the explosion of a camouflet, this a localised underground chamber designed not to break the surface and form craters, but to destroy a strictly limited area of underground territory – and its occupants. There were also many underground encounters, as a tunnelling team, breaking into an enemy position, met the enemy underground. Sometimes these encounters included fighting in the tunnels and chambers.

In June 1916, during the height of the underground war on the Western Front, British tunnellers fired 101 mines or camouflets, while German tunnellers fired 126 mines or camouflets. This amounts to a total of 227 mine explosions in one month – one detonation every three hours. Inevitably casualties’ rates were high in relation to the small size of such units: in one six-week period, one tunnelling company alone had 16 men killed; 48 sent to hospital; and 86 minor cases treated at the shaft head and returned to company billets.

The Royal Engineers Tunnelling Companies were made up of specifically qualified men chosen from the ranks, this then was mixed with drafts of men specially recruited for this kind of work. The British Army therefore mostly enlisted experienced coal miners, many outside their nominal recruitment policy. The desperate need for skilled men saw notices requesting volunteer tunnellers posted in collieries, mineral mines and quarries across South Wales, Scotland and the Northeast of England covering Derbyshire, County Durham, Nottinghamshire and Yorkshire. In addition, specialist tin miners were also recruited from the Cornish mines mainly joining the 251st Company RE. To attract the tin miners, a per diem of six shillings a day was offered to underground miners, which was around double to that being paid in the mines.

Eight such RE Tunnelling Companies were initially created upon the units' formation in February 1915, with another twelve following later in the year. An additional Company  was formed in 1916.

The Tunneller’s Digging Tool itself is very good with a lovely service used patina throughout. The metalwork is nicely dated 1915 where this joins the wooden shaft, the shaft in turn is just as pleasing with no damage or woodworm of any kind.