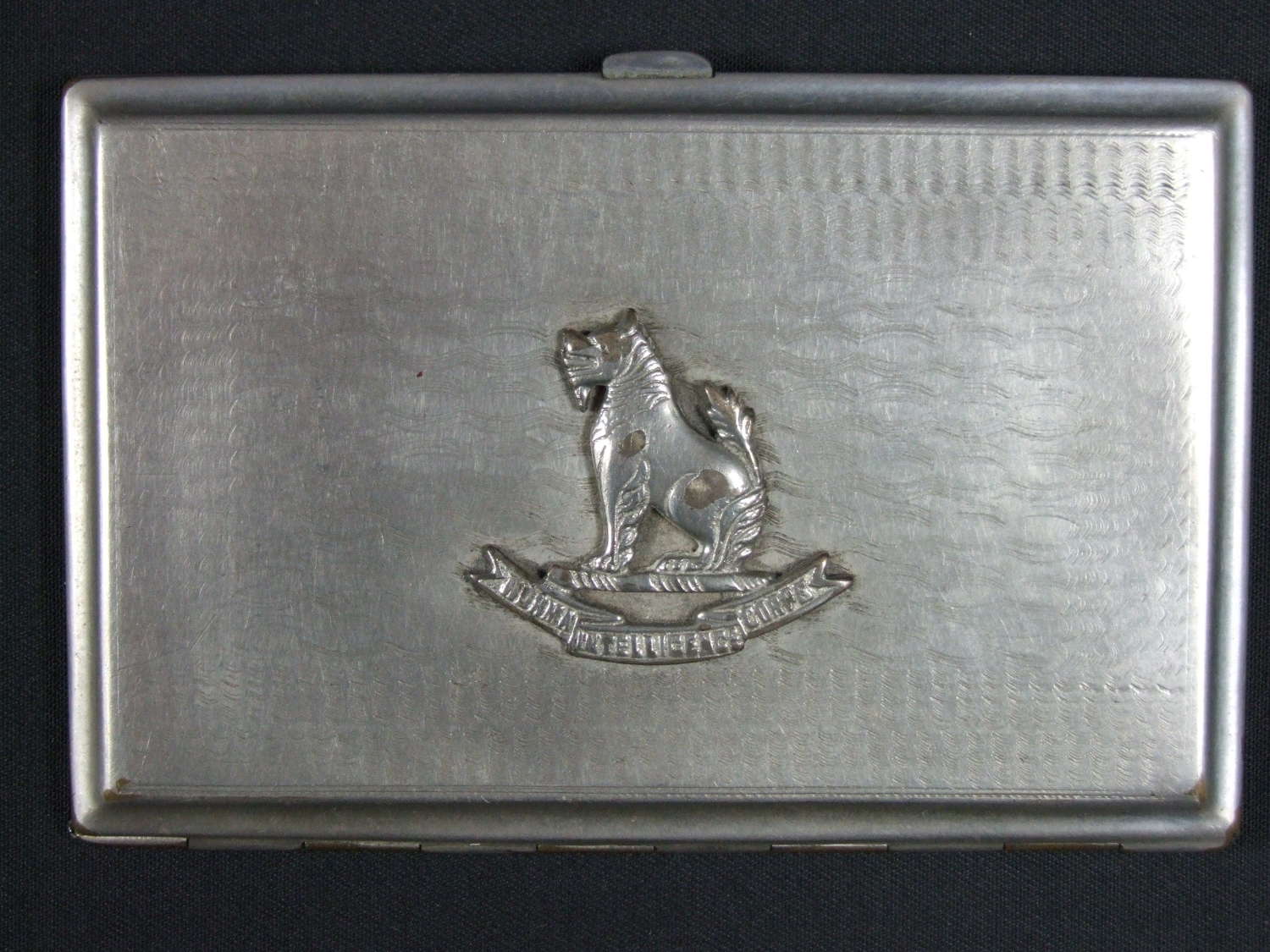 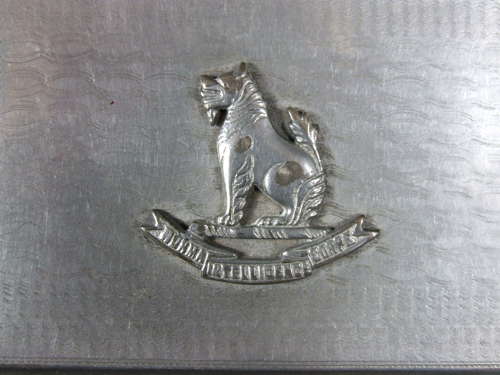 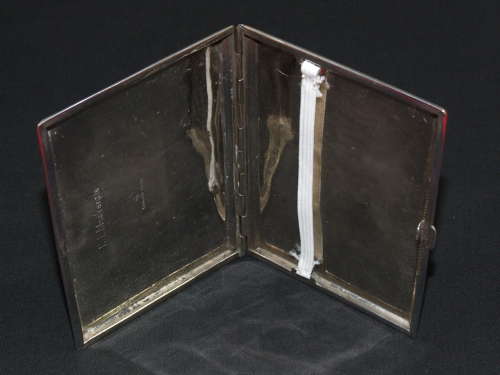 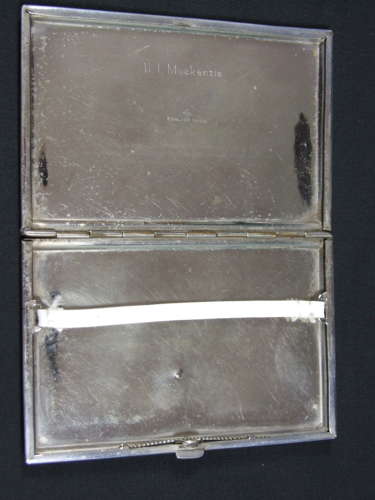 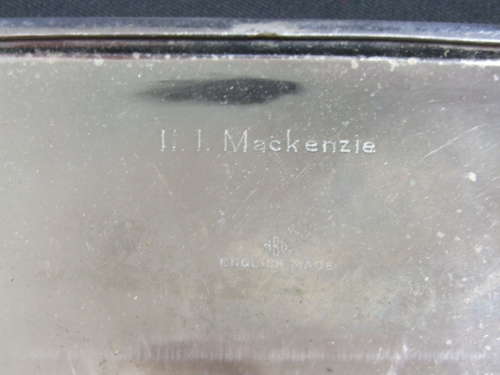 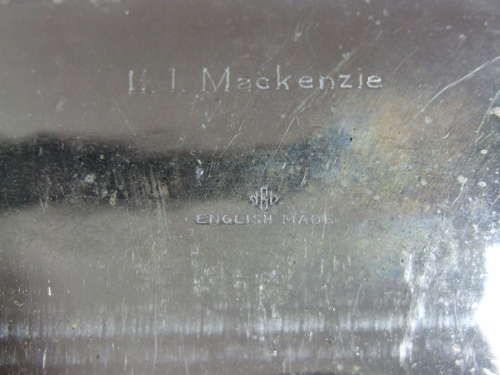 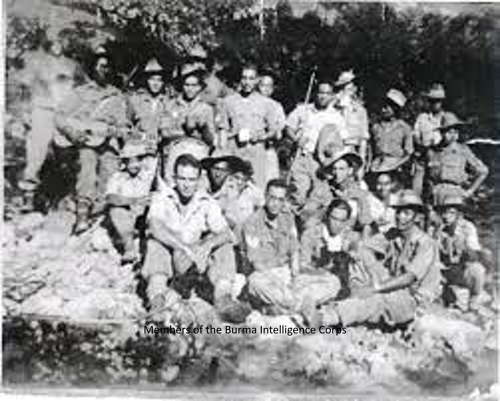 A silvered pocket cigarette case with attached Silver Cap Badge of the Burma Intelligence Corps. The owner’s details engraved inside the case: N.I.Mackenzie details of whom can be found in the list of evacuees here:

The Cigarette Case and Cap Badge are in very good condition with the cap Badge being especially rare. The background to  The Rangoon Field Brigade, Burma Auxiliary Force was unknown to me and makes interesting reading. It also explains how L/Bdr Mackenzie in a Filed battery became join the Intelligence Corps.

The Rangoon Field Brigade was formed originally as the Rangoon Volunteer Artillery on 20th October 1879. The brigade became the Rangoon Defence Volunteers on 30th September 1892 and the Rangoon Port Defence Artillery Volunteers on 19th May 1905. During the First World War the brigade became the 3rd (Rangoon) Port Defence Group, Garrison Artillery (Auxiliary Force India). The brigade was reconstituted on 1st October 1920 and on 1st September 1928 was increased in size to two Field Batteries, Royal Artillery and No. 14 Machine Gun Company. When reorganised on 1st April 1933, No. 5 Field Battery, Royal Artillery, the Rangoon Fortress Company, Royal Engineers and a Wireless Section were added to the establishment. The unit designation,

the Rangoon Field Brigade, was given when the Brigade came under the Burma Auxiliary Force in April 1937, following the transfer of units to the Burma Army with the separation of administration from India. The Wireless Section was designated the Rangoon Artillery Signal Section, Royal Signals on 30th September 1937.

On 3rd September 1939, the Rangoon Field Brigade consisted of a headquarters, one battery of four 18-pounder guns, one Fortress Company of engineers and one artillery signal section. Two of the 18-pounder guns were sent to man the Examination Battery at Dry Tree Point, on the Rangoon River, together with a searchlight section from the Fortress Company and the artillery signal section.

In May 1940, the guns at Dry Tree Point were replaced by two 6-inch Mk VII guns from England, which together with a further 6-inch training gun at Monkey Point, close to Rangoon, formed the 1st Heavy (Coast Defence) Battery, RA, BAF (Rangoon Field Brigade). The 18-pounders returned to Rangoon. At the same time, three HCD coastal artillery searchlights were installed at Dry Tree Point.

In September 1940 the 18-pdrs were used to equip the newly formed 5th Field Battery, Royal Artillery, Burma Auxiliary Force, remaining as part of the Field Brigade. This battery left for Maymyo on 1st June 1940. On 8th February 1941 the unit strength was 23 Officers and 476 Other Ranks.

In December 1941, the battery was in the Southern Shan States near Taunggyi, at Takaw with the 2nd Battalion, KOYLI, under command of the 1st Burma Brigade. Late in January 1942, the 5th Field Battery moved south to join the 17th Indian Division. Between 15th/16th February a section of the battery, supported the 16th Indian Infantry Brigade defence of the Bilin River line, with two 18-pdrs in the anti-tank role. The battery took part in the defence of the approaches to the Sittang bridge, on the east bank of the river near Mokpalin. The guns were lost following the premature destruction of the bridge. In December 1941, "B" Troop of the 5th Field Battery was formed without guns but on 27th December sent a detachment of one British Officer and 20 British Other Ranks with six Austrian

65mm mountain guns to Mergui for beach defence and one NCO and six other ranks with two 65mm guns to Tavoy, also for beach defence. The balance of "B" Troop of the 5th Field Battery were given eight 77mm Italian field guns for use in the anti-tank role. These were handed over to an Indian antitank battery on 17th February 1942.

As the threat of war with Japan grew, in February 1941 a new Auxiliary Force unit was created for air defence, 1st Anti-Aircraft Battery, RA, BAF, initially equipped with 20 light machine guns. This was commanded by Major Hogan and remained as part of the Rangoon Field Brigade until 15th August 1941 when the battery was detached to form part of the 1st Heavy Anti-Aircraft Regiment, RA, BAF.

In May 1941, No 1 (Burma) Artisan Works Company was formed under Major Jolly and left for Maymyo in August. Later in September that year, the Rangoon Field Brigade formed a bomb disposal unit and a light aid detachment, the first of eight such detachments.

On 22nd February 1942, HQ Rangoon Field Brigade and detachments left Rangoon for Yenangyaung, leaving behind the Dry Tree Point garrison, manning details at the power station at Ahlone and guards on the oil refineries at Thilaun and Seikkgyi. The Bomb Disposal Unit went to Magwe aerodrome on 5th March and spent a month salvaging motor vehicles, petrol and bombs abandoned by the RAF. On 26th March 1942, the Rangoon Field Brigade was ordered to Shwebo and all available personnel were employed as interpreters, well-borers, lorry drivers and drivers for bulldozers of the X.M.U.(?) on the Shwegyin Road. Between 15th May and 21st May 1942 the brigade was evacuated to India.

Of the survivors to reach India, some BAF men were formed into the 5th Field Battery at Mhow, which was offered to India and the remainder would have joined other BAF personnel at Mhow.

Many BAF men were assigned to the Burma Intelligence Corps and the expansion of this unit led to the eventual disbandment of the 5th Field Battery during 1943.

A very nice artefact with and extremely rare badge.