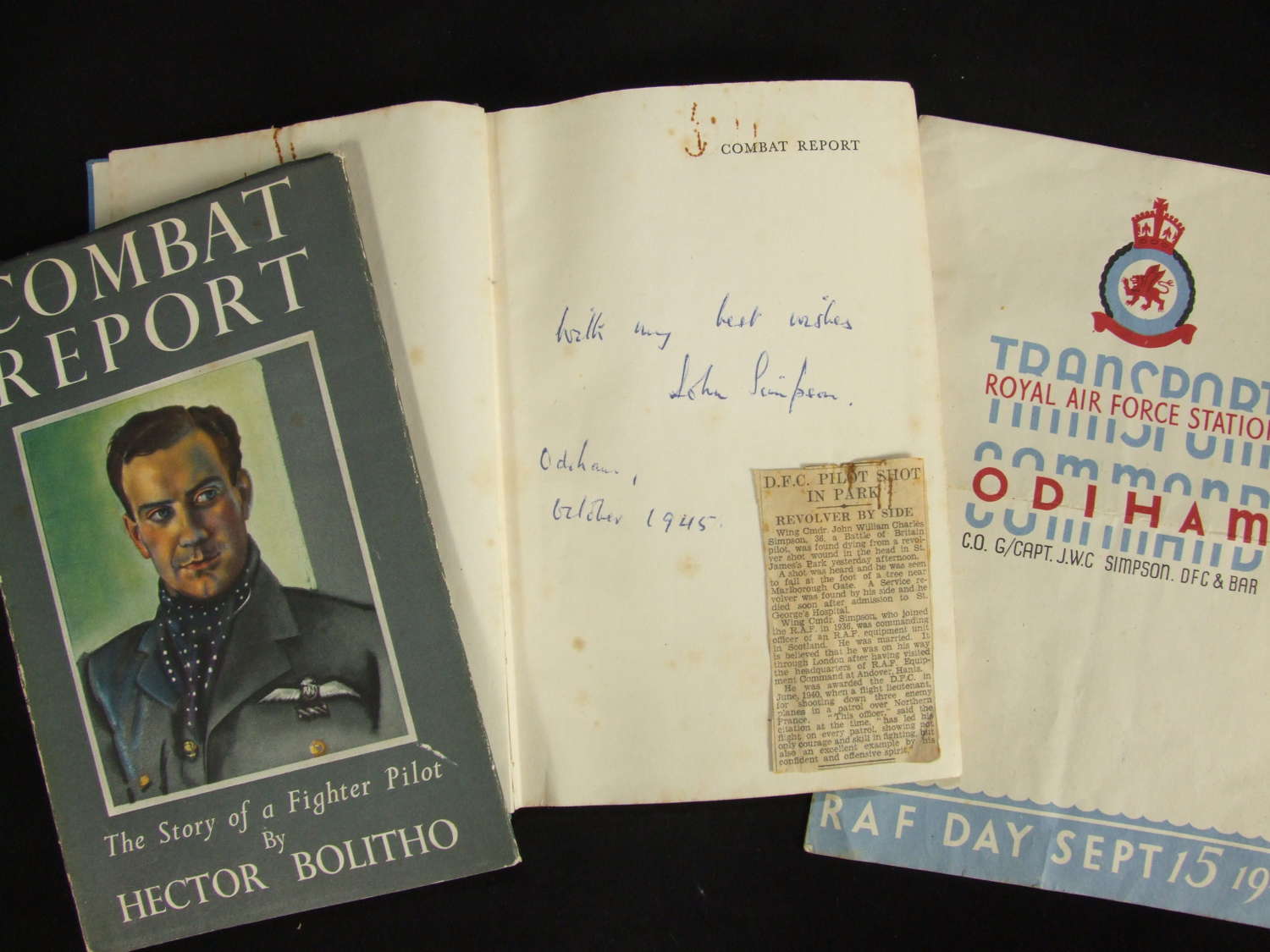 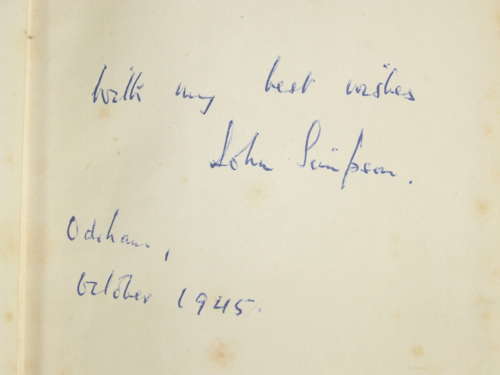 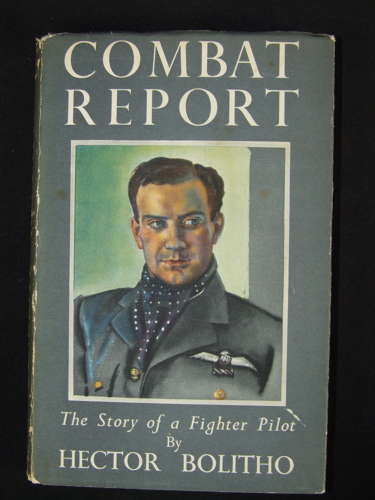 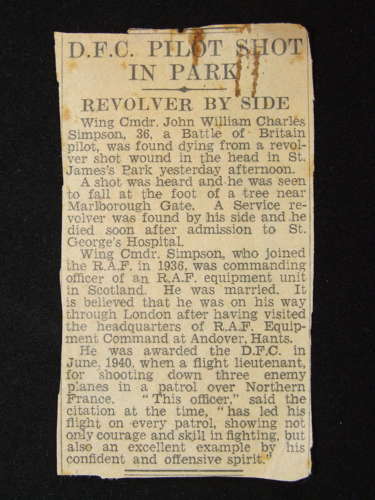 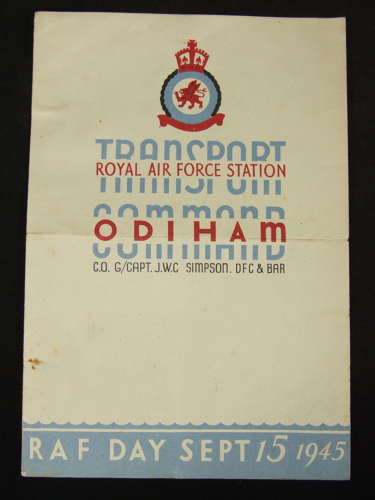 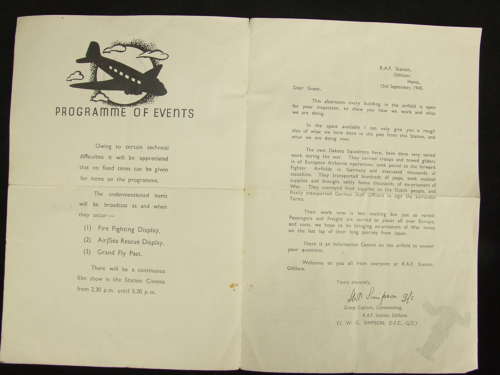 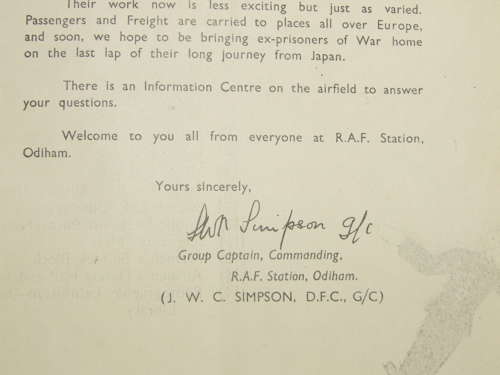 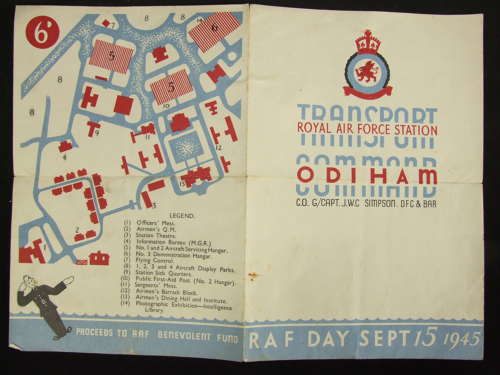 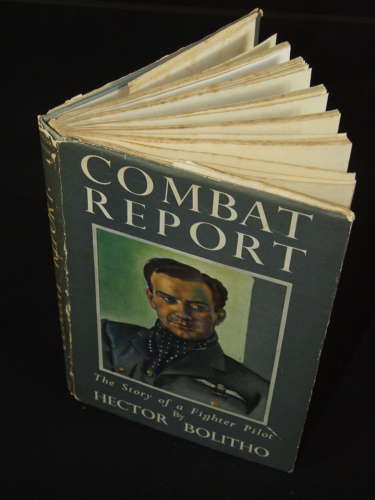 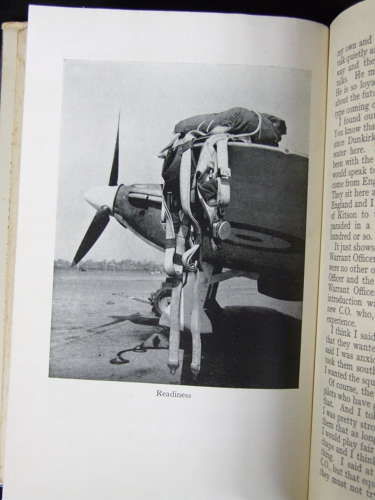 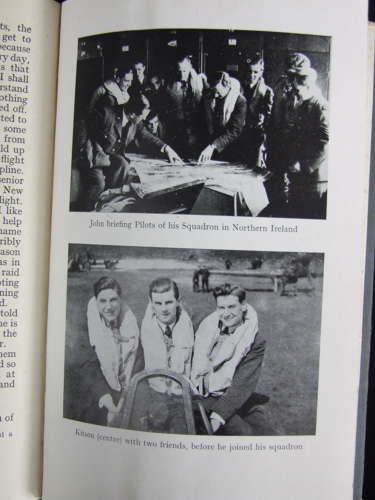 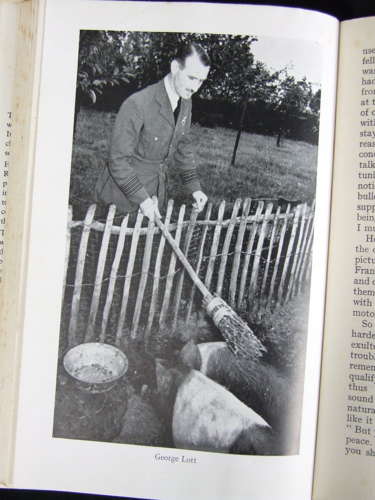 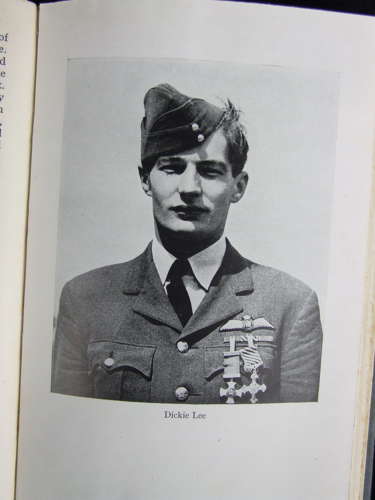 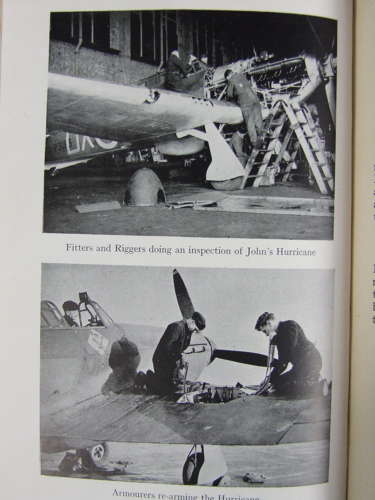 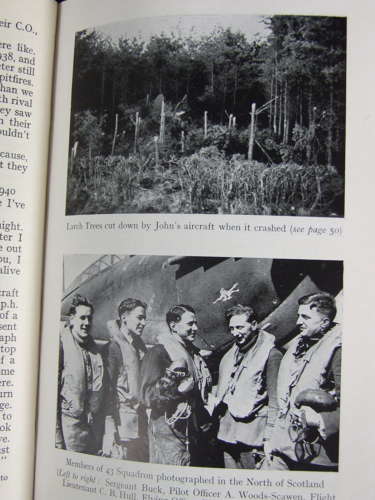 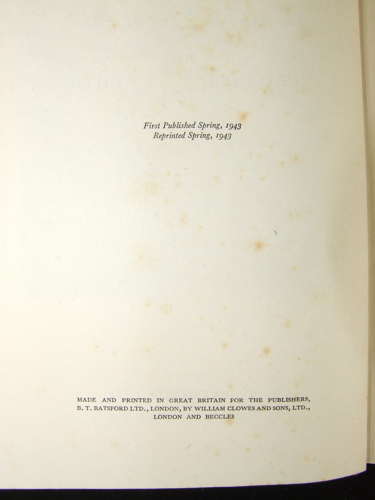 An exceptionally rare signed copy of the 1943 book “Combat Report”, the story of Battle of Britain and Battle of France fighter pilot John Simpson by Hector Bolitho and signed by Simpson himself while Squadron Commander at Odiham. The signed inside front page reads “With my best wishes John Simpson Odiham October 1945.” This is first signed copy I have ever seen.

Included with the signed book is a programme of events for RAF Transport Command Odiham RAF Day September 1945 and a newspaper cutting recording Simpson’s suicide by a gunshot wound to the head in St. James’ Park on August 12th, 1949. All in very good condition

John William Charles Simpson was born at Ramsay St Mary's, Huntingdonshire on 14th March 1913. He joined the RAF on a short service commission in January 1936 and did his initial training course at 9 E&RFTS Ansty.

Simpson was posted to 5 FTS Sealand on 21st March and joined 43 Squadron at Tangmere on 11th October 1936. In December he became squadron adjutant.

Still serving with 43, Simpson shared in probably destroying a He111 on 3rd February 1940. On 9th May he was appointed a Flight Commander and on this day he shared in the destruction of a Do17. Over Dunkirk on 1st June Simpson destroyed a Me109 and a Me110 and on the 7th two Me109's and a Me110 over France.

Simpson claimed a Me109 destroyed and another damaged-on 19th July. He was then shot down himself and bailed out, landing in a cucumber frame at Worthing and suffered a broken collar bone and wound in the ankle. His Hurricane, P3140, crashed into the Channel off Felpham.

Simpson returned to 43 in October and on 30th November probably destroyed a Ju88, which crashed into the sea.

In early December 1940 Simpson was given command of 245 Squadron at Aldergrove. On 8th/9th April 1941 he destroyed a He111 at night over Belfast, the first German aircraft to fall on Northern Ireland. On 5th/6th May he shot down another He111 at night and on the 13th he shot down a Do17.

In mid-June 1941 Simpson was posted away to a staff job. In November 1942 he was in Gibraltar, as a Wing Commander, and in January 1943 he was in North Africa as a Group Captain.

Still serving in the RAF, Simpson died from a self-inflicted shot on 12th August 1949.

The inquest heard evidence that Simpson had suffered ill health since 1945 and about a month before his death had been injured in a car accident. He had been concussed and headaches continued. He appeared to have become concerned that his flying career might be over. The coroner described Simpson as "a gallant officer with a fine war record" and recorded a verdict that, "he took his life whilst the balance of his mind was disturbed".

A classic evocative first hand account of a brave RAF fighter pilot; Hector Bolitho's long term friend, S/L John Simpson was the subject of this wartime book 'Combat Report' by Hector Bolitho, though he was only identified as 'John' in its pages. Bolitho's beautiful English allows the reader to become absorbed in the atmosphere of wartime England during the first two years of WWII.

The book was recently re-issued as 'Finest of the Few'. A lot of the biography is told by transcriptions of Simpson's personal letters to Bolitho. The reader learns how the insecure character of Simpson transforms into one of great courage and strength from direct aerial combat with the Luftwaffe.

This book is a virtually unknown treasure.

Description from the book flap: This is not only the combat report of a pilot who has fought in fighters since the war began. It is also the story of personal combat-of a character formed and made whole through service with the R.A.F. Hector Bolitho, who has served with the R.A.F.V.R. since the outbreak of war, has poured twelve years of experience of the Service into this story of his friend, who complained, ten years ago, that he had “an awful inferiority complex”, and who has since brought down thirteen enemy aircraft. There have been several fine personal records written by fighter pilots, but this book, based on the letters and diaries of a pilot, gives a fuller picture of the Royal Air Force as a whole, with revealing stories of actual pilots serving with the famous 43 Squadron, and others. Other stories have told us of the actions of the pilots in combat. This seems to go deeper, and reveal the spirit of the R.A.F., through its understanding of the pilot’s mind and character.

He is buried in St Andrew's churchyard, Tangmere. His portrait was done by Eric Kennington and Cuthbert Orde.