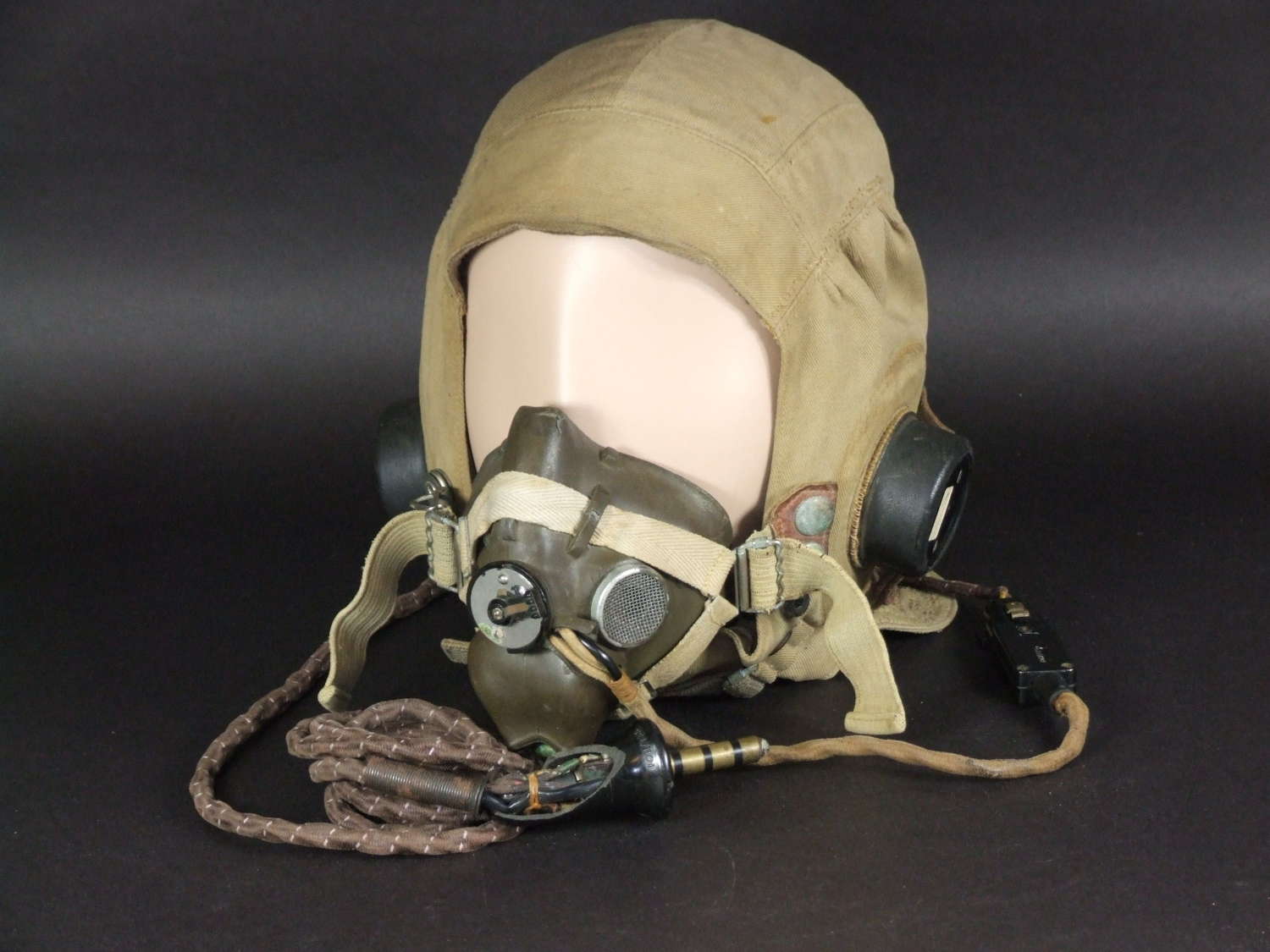 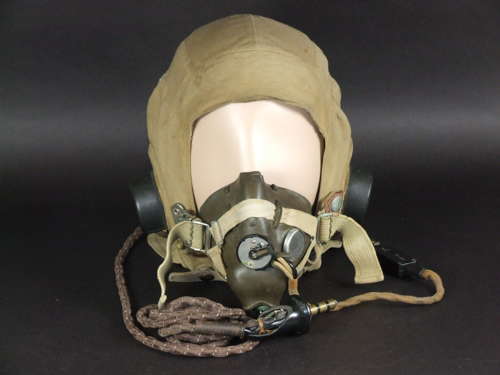 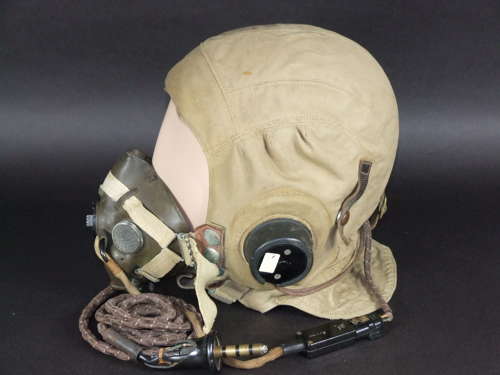 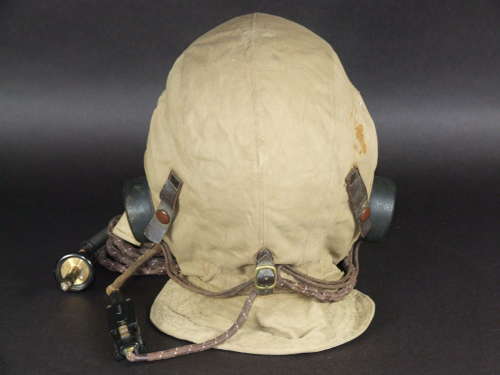 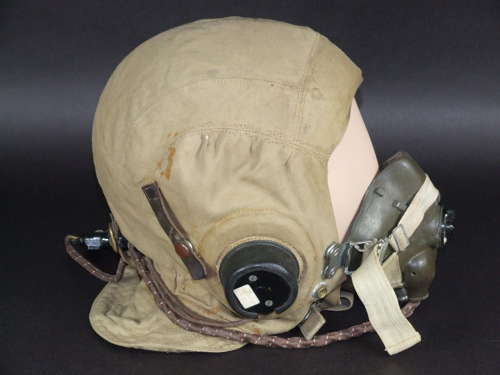 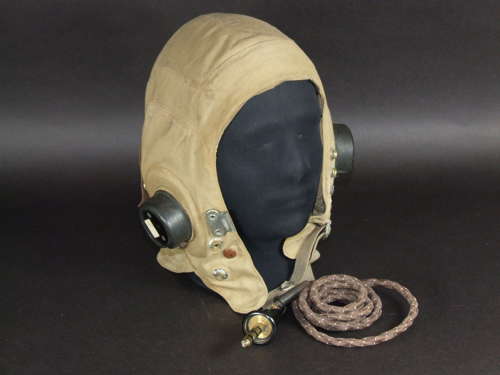 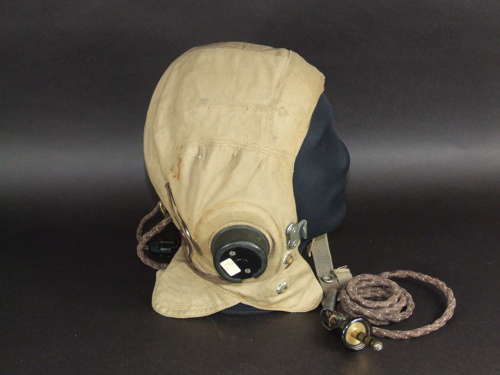 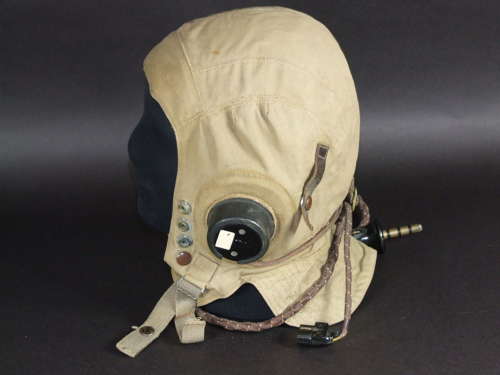 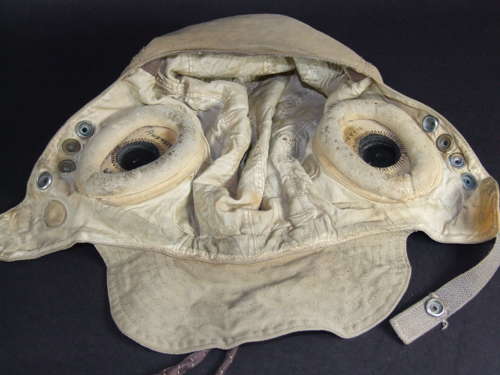 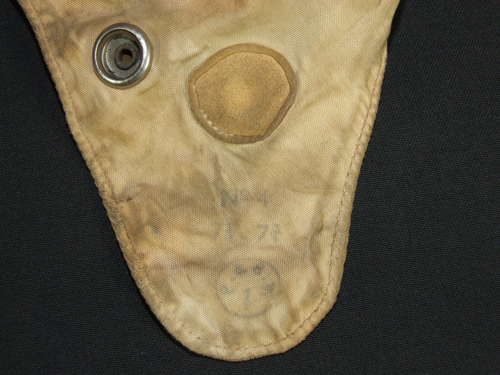 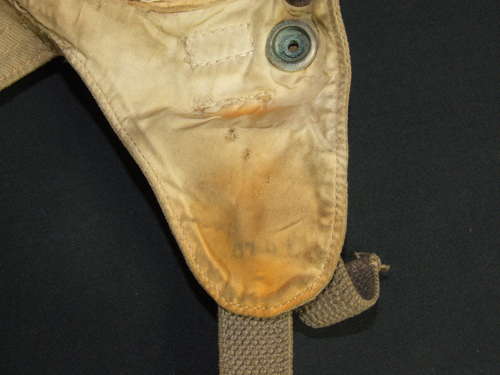 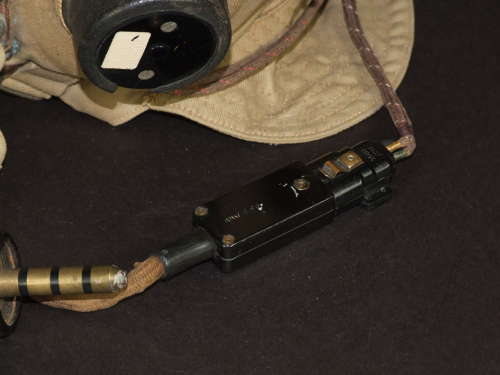 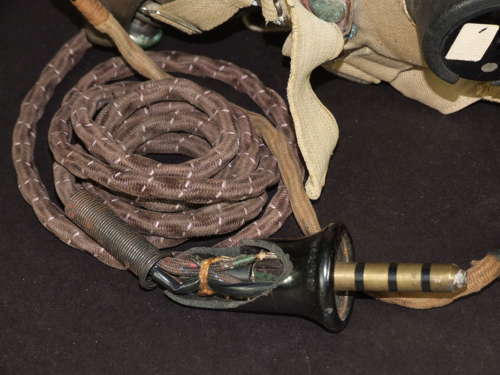 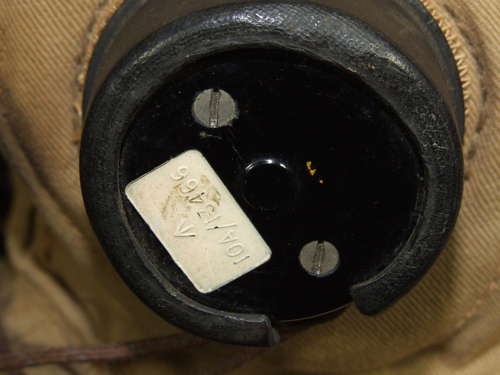 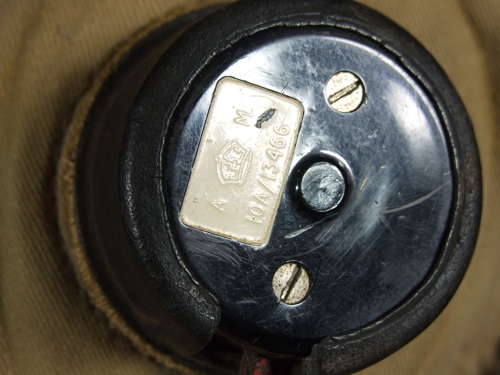 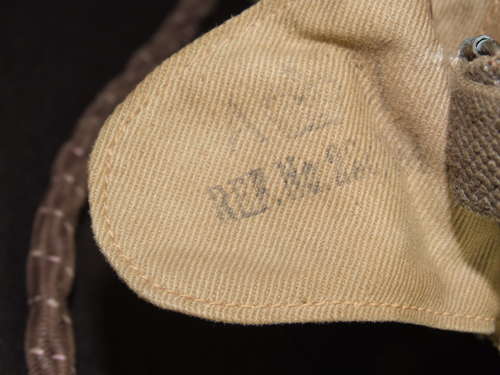 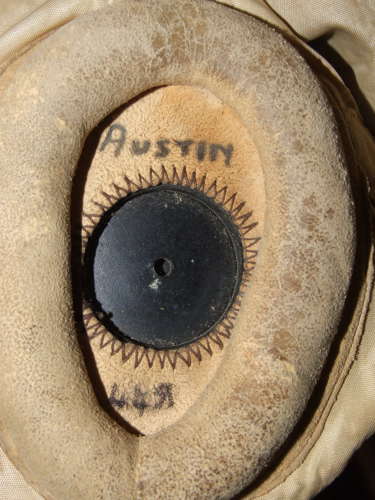 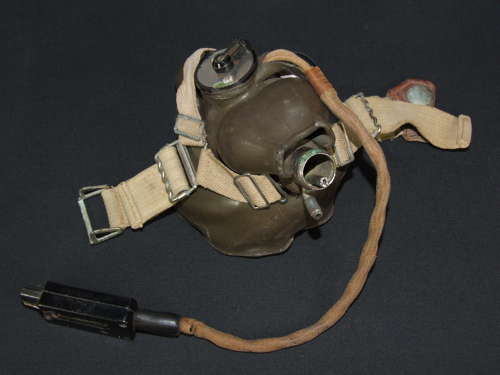 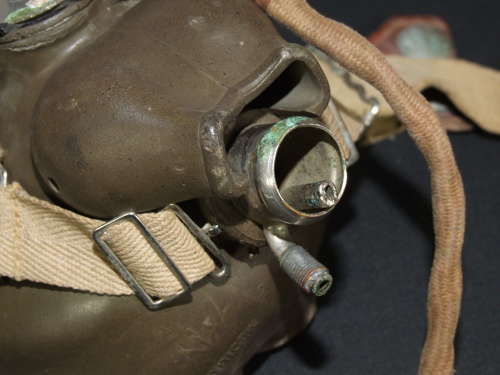 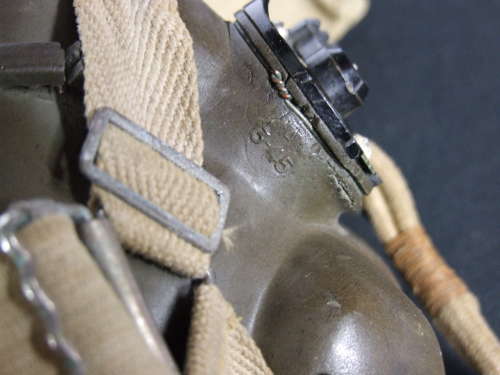 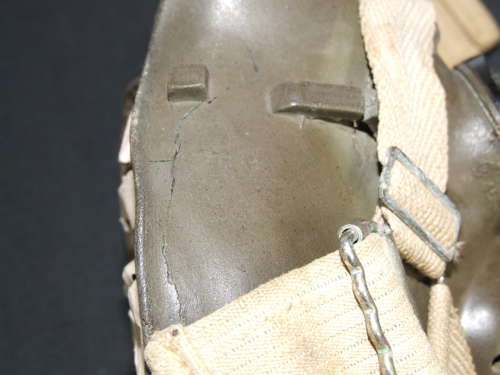 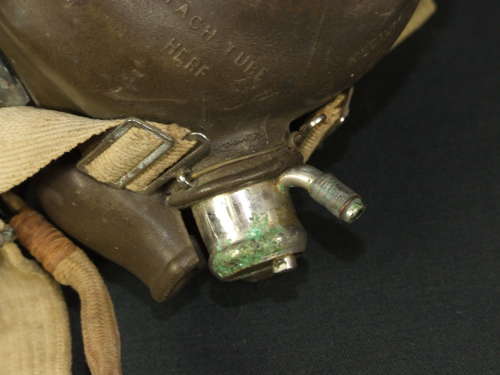 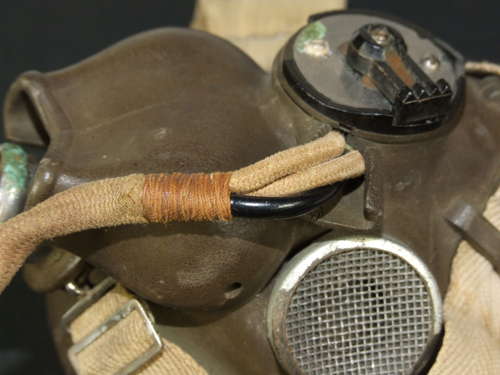 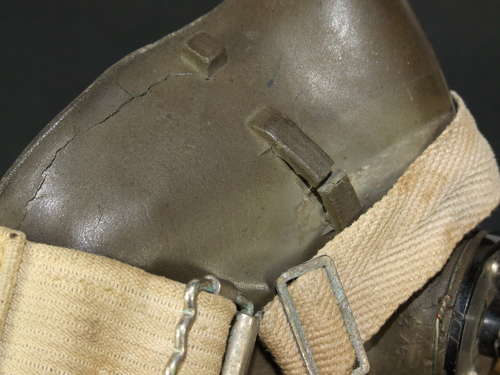 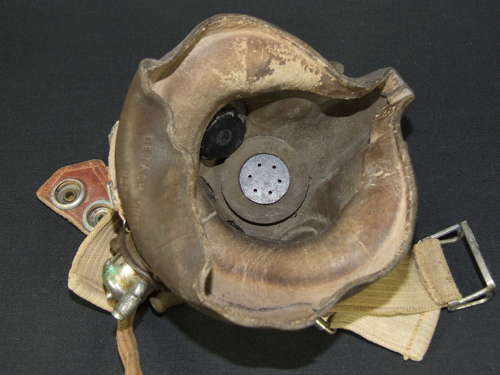 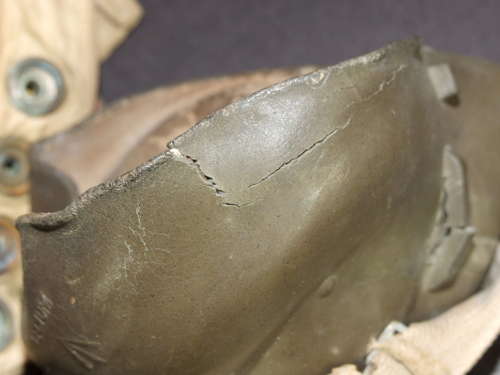 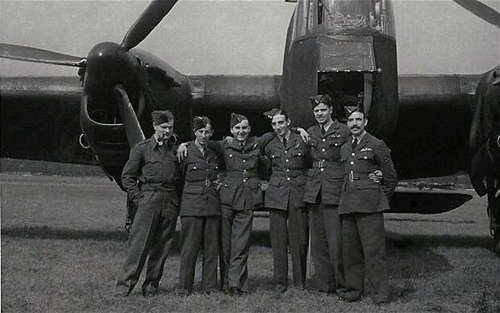 A very nice example of an early D Type Flying Hemet, named to Austin and with the last three digits of the service number 448, accompanied by a 3/45 date H type Oxygen Mask.

Squadron Leader John Austin (104448) was one of the RAF’s longest-serving special duties pilots and dropped agents and supplies to Resistance movements in eight countries in occupied Europe. The last images shows Austin, second from the right in frony of his Whitley along with his crew.

The helmet is a large size 4 and in very good condition. The Oxygen Mask with some splits and cracks all of which are shown in the images but with a nickel plated brass fitting for the oxygen tube with what general discussion appears to believe is an attachment for a warm air source to prevent icing in the oxygen tube. No tube is fitted, no doubt in keeping with the low level operation of the Special Duties Squadron. The cord is an external cord no doubt issued with the H mask, the connector plug damaged as some many were whilst leaving and entering the aircraft.

Following the German occupation of Yugoslavia in April 1941, the Special Operations Executive (SOE) opened links with the local partisan groups. Contact was made with the Chetniks commanded by General Mihailovic, and a plan was conceived to air drop supplies to his forces. Yugoslavia could not be reached from Britain, so two converted Whitley bombers of No 138 Squadron — one of them flown by Austin — were sent to Malta to mount Operation Bullseye.

Austin was selected to fly the first mission, and — despite local advice that it was too dangerous to mount the operation at night — it was decided to make the attempt in darkness. Accompanied by a Serbian pilot to assist with map reading, he took off from Malta on the night of November 7 1941.

Having flown up the Adriatic Sea to the Yugoslav coast, Austin turned inland through the mountains to reach the drop zone (DZ) at Mitrovica. The reception committee had lit four bonfires, and Austin circled the site flashing the pre-arranged signal, which was duly acknowledged. He made a number of circuits to drop his containers before heading back to Malta. The following month Austin made another attempt to drop supplies to Mihailovic at Mitrovica, but was thwarted by bad weather in the mountains.

On February 3 1942 he headed for Sarajevo with four agents and eight containers of supplies. Wireless contact was made with the partisans and the DZ identified. Flying at 700ft, Austin dropped the containers and two of the agents before making a second circuit to drop the others. Having received a green light signifying the operation’s success, he returned to Malta, arriving 11 hours after taking off. A few days later he returned to Britain to learn that he had been awarded a DFC.

John Beech Austin was born on July 17 1917 at Sutton Coldfield and educated at King Edward VI School, Birmingham. His first job after leaving school was with the Midland Bank, but in May 1939 he followed his elder brother (a Spitfire pilot) into the RAF Volunteer Reserve and trained as a pilot.

In July 1940 he joined No 51 Squadron to fly the pre-war Whitley bombers. He completed numerous bombing operations over Germany, and his squadron was also sent to attack the German invasion barges gathering in the Channel ports for Operation Sealion, Hitler’s planned invasion of England. During this period, on September 23, Austin joined a force of 129 bombers sent to Berlin, Bomber Command’s first concentrated attack on the city.

In March 1941 he joined No 1419 (Special Duties) Flight (later 138 Squadron), which operated in support of SOE and flew initially from Newmarket racecourse. Most of their missions were carried out by moonlight, and Austin made one of the flight’s first drops over France when he delivered supplies to the Resistance fighters of the “Ventriloquist” network near Limoges.

During the summer of 1941 Austin established a reputation for “pressing on”. Over the Zuider Zee, his aircraft came under heavy anti-aircraft fire and he descended to 800ft to shoot out the searchlights before dropping his agents over the Netherlands. On another flight to that country, he located a dinghy and survivors and transmitted an SOS before heading on to Zwolle to drop his supplies.

En route to Belgium on September 30, both Austin’s gun turrets became unserviceable. Despite this, he continued on his way, avoided the probing searchlights, and successfully dropped three agents. Four nights later, on Operation Luckyshot, he flew to Charleroi in Belgium; after avoiding heavy anti-aircraft fire, he found the drop zone in poor visibility, dropped two agents then headed for a second DZ, where he delivered five containers. He received a signal from SOE: “Congratulations. Excellent operation in difficult country.”

Soon after returning from Malta, Austin was rested, and for a time he was an instructor at a training unit. But in December 1942 he returned to No 138 Squadron, now flying the Halifax. Operations over France had increased significantly, and he made numerous sorties to distant drop zones. On February 16 1943 he flew to Norway to deliver 16 containers in the Telemark region; this was soon followed, in the same moon period, by other long-range sorties dropping agents over Denmark and Poland. During this period Austin also operated over the Netherlands, unaware that the Dutch Resistance had been infiltrated by the Gestapo and that all agents and supplies were being captured as they landed.

On the night of May 14 Austin was on another sortie to France when his aircraft was badly damaged by anti-aircraft fire. He was forced to jettison his containers and limp back to base.

Pilot Officer Austin has completed many operations, and has displayed a high degree of skill in completing his tasks successfully.

Since the award of the DFC, Flt. Lt. Austin has completed numerous operations. On one occasion, while he was still several hundred miles from base, his aircraft developed trouble with its flaps which caused it to become practically out of control. After a considerable effort, FIt. Lt. Austin was able to regain control, and by his determination and skill he eventually flew back to base. In May, 1943, this officer again returned to this country safely, although his aircraft had been severely damaged by anti-aircraft fire and one engine was not functioning.

On promotion to squadron leader, Austin flew a Halifax to Algeria to command No 1575 Flight (later No 624 Squadron). Following the Allied invasion of Sicily and Italy, his flight was kept busy supplying French, Italian and Yugoslav partisan groups. Austin flew the unit’s first sortie from Blida on June 13; despite one engine failing, he continued to the drop zone in Sardinia only to discover that there was no reception party on the ground.

Three nights later he carried out the unit’s first drop over Italy, delivering six containers to a DZ near Lake Varago. During the summer months he flew numerous sorties to Corsica, Italy, and to southern France, where he dropped the Americans’ “Mutton Pork” team, the last Office of Strategic Services agents to be infiltrated into France until the spring of 1944.

In January 1944, No 624 moved to Brindisi in southern Italy. Austin flew sorties over Yugoslavia to meet the increasing need to supply Tito’s partisans. He also dropped supplies to the growing resistance movement in northern Italy.

Finally, after more operations over the Balkans, he was rested in March 1944, having added a Bar to his DFC — the citation praised “his exceptional ability and attitude towards operational flying”, which had had “an inspiring effect on his squadron”.

Austin spent the remainder of the war flying transport aircraft, and was demobilised in November 1945. In addition to his British gallantry awards, he received the Croix de Guerre, the Dutch Flying Cross and a Polish decoration.

On attempting to return to his employment at the bank, Austin was informed that in the six years he had been “playing at war”, others were more up to date. He declined their offer of a job and started a successful career in the timber industry . He remained involved in the business until late in his life, visiting his office in Shoreham only two days before his death. He was himself a skilful carpenter and woodworker.

Broad-shouldered and standing 6ft 4in tall, Austin had a commanding presence, but as a man he was never anything but self-effacing. In his later years he observed: “Once you have come through a war, you cannot be frightened by the much lesser risks posed by business.” He had a great respect for life, which had led him to volunteer for special duties with No 1419 Flight rather than return to a bomber squadron, an outlook which extended even to the wasps nesting in his cedar tree and the elderly rat in his bicycle shed: they caused him no harm, he explained, so he left them in peace.