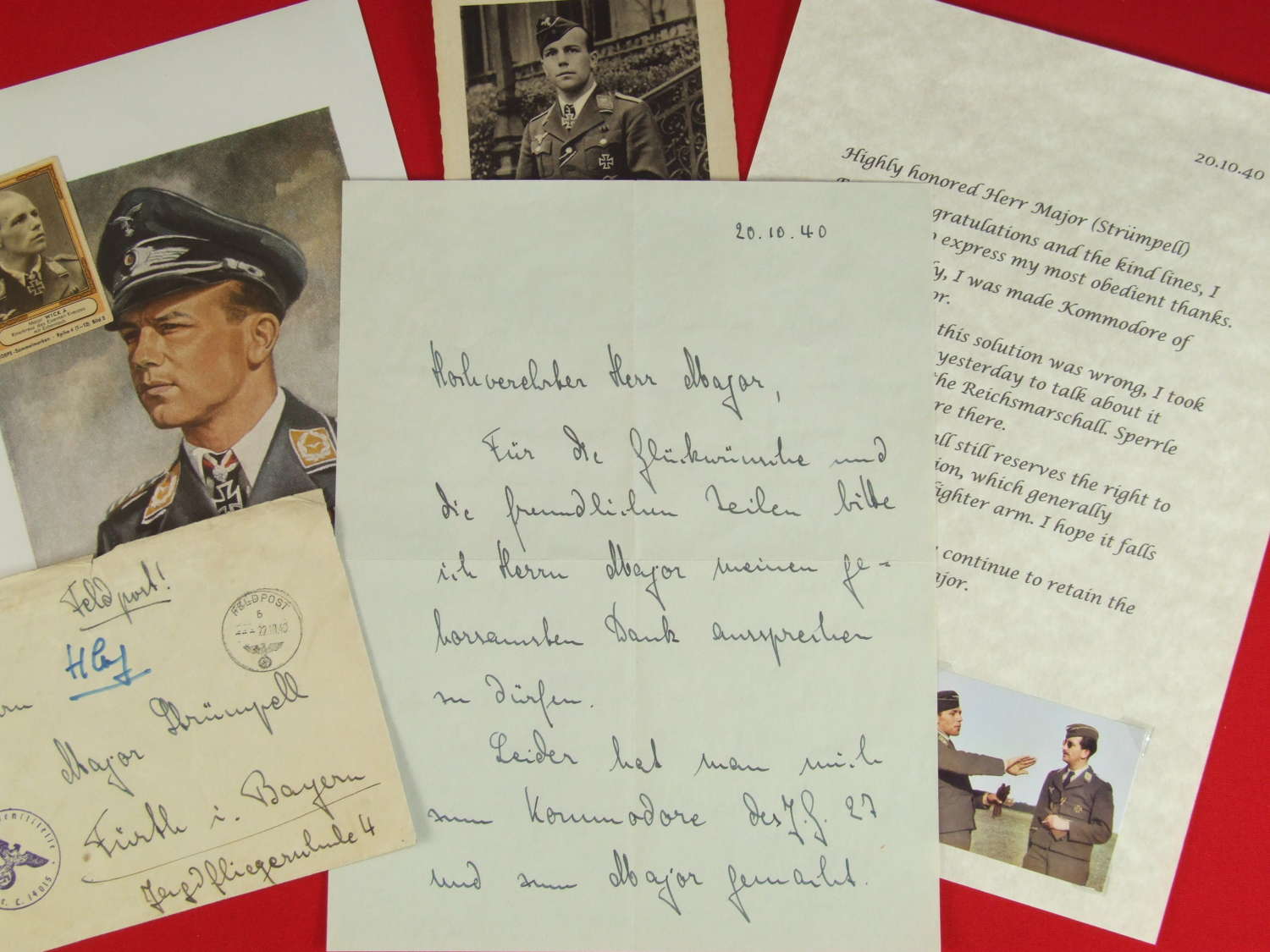 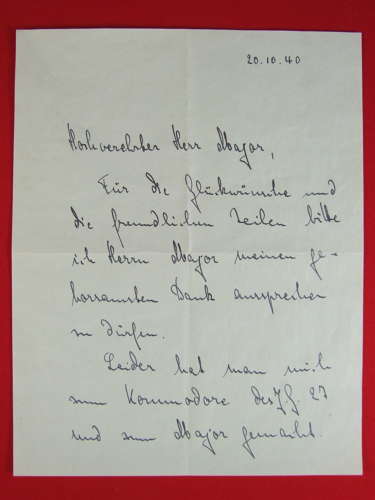 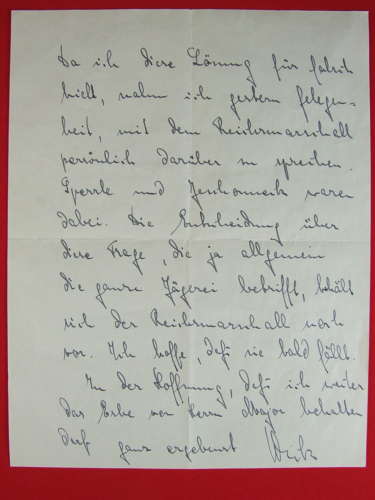 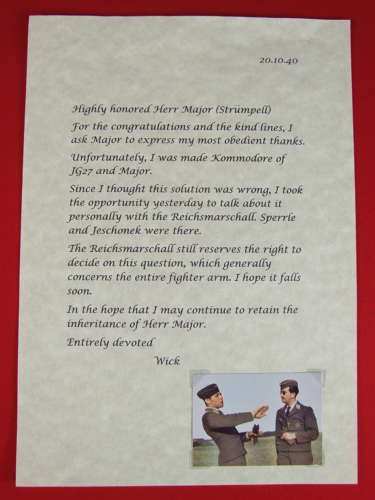 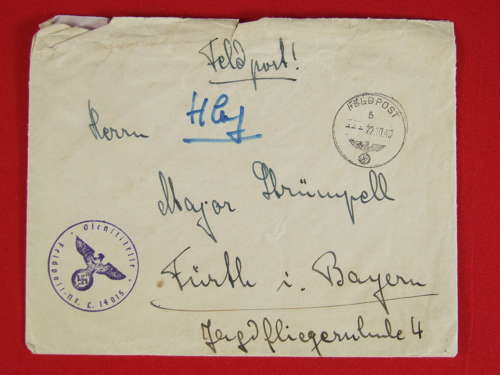 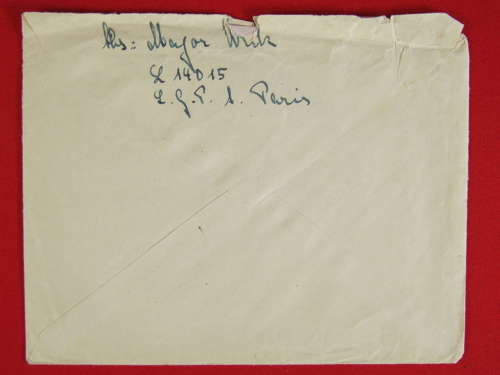 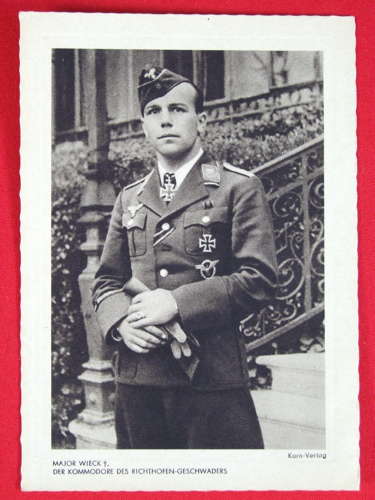 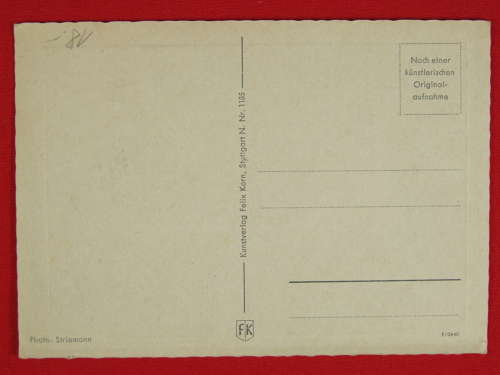 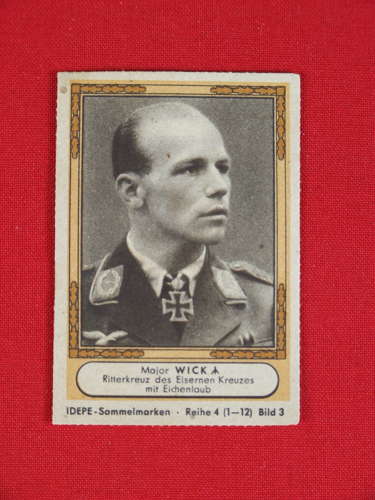 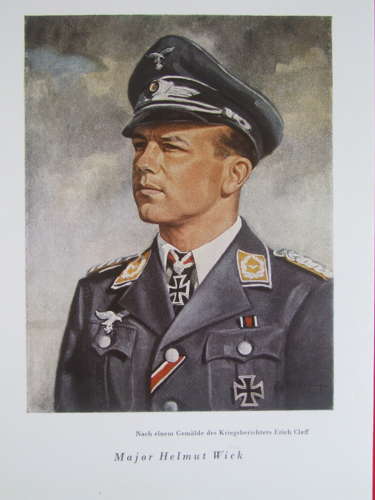 An historically important Feldpost letter hand written and signed by The Luftwaffe’s leading ace, Major Helmut Wick to his friend Major Hennig Strumpell on October 20th 1940. Written in black ink on a single sheet of paper measuring 270mm x 210mm and still with the original envelope, the reverse of which shows Wick’s Feldpost number and origin point in Paris, both letter and envelope are in very good condition

The day before, Wick had been promoted to Major and Kommodore of JG27, a decision he was unhappy about. Wick had taken over command of I.Gruppe JG2 from Strumpell on September 9th 1940, who transferred to a fighter school. Ultimately Goering reversed the decision and promoted Wick to Kommodore of JG2 on the same day this letter was written.

The literal translation of the letter reads:

For the congratulations and the kind lines I ask Major to express my most obedient thanks.

Unfortunately, I was made Kommodore of Jg27 and Major.

Since I thought this solution was wrong, I took the opportunity yesterday to talk about it personally with the Reichsmarschall. Sperrle and Jeschonek were there. The Reichsmarschall still reserves the right to decide on this question, which generally concerns the entire hunting industry. I hope it falls soon.

In the hope that I may continue to retain the inheritance of Herr Major.

Helmut Paul Emil Wick (5 August 1915 – 28 November 1940)  was a wing commander in the Luftwaffe and the fourth recipient of the Knight's Cross of the Iron Cross with Oak Leaves, the nation's highest military decoration at the time. He joined the Luftwaffe in 1936 and was trained as a fighter pilot. He was assigned to Jagdgeschwader 2 "Richthofen" (JG 2—2nd Fighter Wing) and saw combat in the Battles of France and Britain. He was the highest scoring fighter pilot in the Battle of Britain with 42 victories.

In October 1940, he was given the position of wing commander of JG 2—the youngest in the Luftwaffe to hold this position. Wick was shot down in the vicinity of the Isle of Wight on 28 November 1940 and was posted as missing in action, presumed dead. By then he had been credited with the destruction of 56 enemy aircraft in aerial combat, making him the leading German ace at the time. Flying the Messerschmitt Bf 109, he claimed all of his victories against the Western Allies.

Included with the letter are an original Photocard of him, a small picture on paper, possibly part of a collector’s series of album cards and a large modern reprint of a painting of him wearing his Knights Cross with Oakleaves.