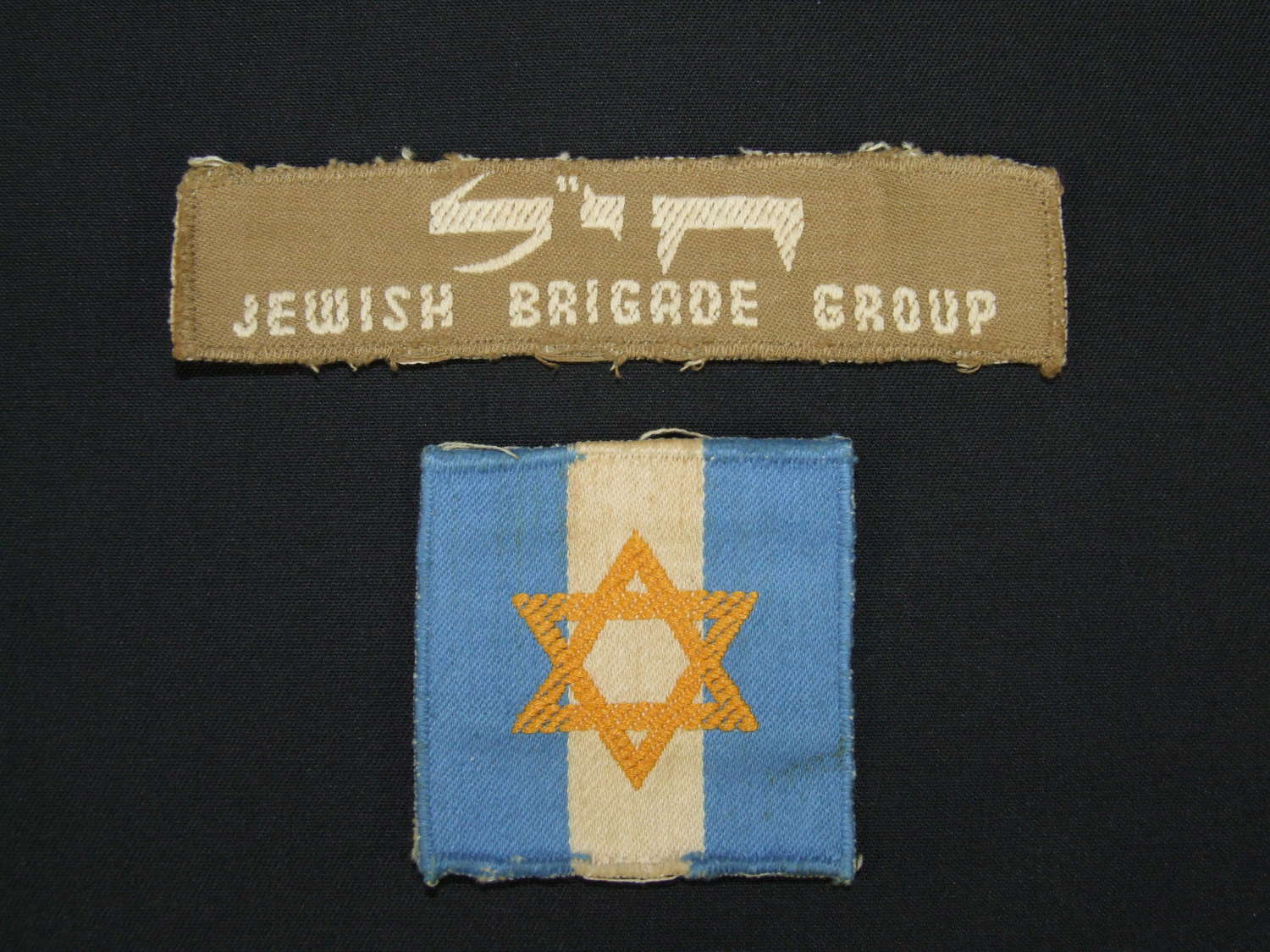 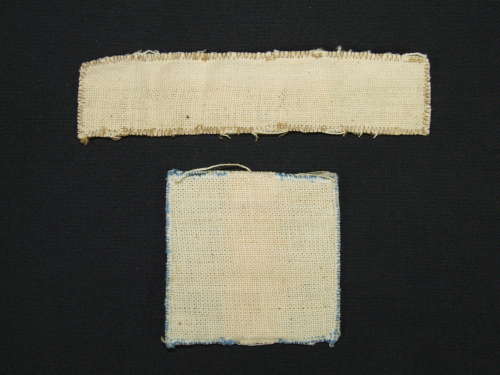 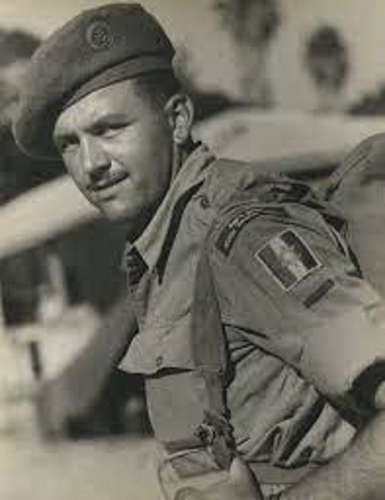 A very scarce Formation Patch and Shoulder Title pair to the Jewish Brigade Group, both in very good condition.

Since I knew little of the Jewish Brigade I thought it worthwhile to include something of the Brigade’s background, all with credit to Wikipedia.

Chaim Weizmann, the President of the Zionist Organization (ZO), offered the British government full cooperation of the Jewish community in Mandatory Palestine. Weizmann sought to establish an identifiably Jewish fighting formation within the British Army. His request for a separate formation was rejected, but the British authorized the enlistment of Palestinian volunteers in the Royal Army Service Corps and in the Pioneer Corps, on condition that an equal number of Jews and Arabs was to be accepted.

The Jewish Agency promptly scoured the local Labour Exchange offices to recruit enough Arab unemployed as "volunteers" to match the number of Jewish volunteers, and others were recruited from the lower strata of the Arab population offering cash bounties for enlistment. The quality of the recruits was, not surprisingly, abysmally low, with a very high desertion rate particularly among the Arab component, so that at the end most units ended up formed largely by Jews.

The volunteers were formed in a RASC  unit and a RASC Port Operating Company, and in the Pioneers Companies 601 to 609 (all but two lost during the Greece Campaign, with the last two returned to Palestine and disbanded there). From 1942, a large number of further Palestinian Arab/Jew mixed units were formed, still with the same mixed ethnic composition and the same quality problems encountered in the Pioneers Companies, including six RASC (Jewish) Transport Units, a women's Auxiliary Territorial Service and a Woman Territorial Air Force Service and several auxiliaries in local units of the Royal Army Ordnance Corps, Royal Engineers and Royal Army Medical Corps.

Nine non-combat infantry companies were also raised as part of the Royal East Kent Regiment ("the Buffs"), to be used as guards for prisoners-of-war camps in Egypt. In August 1942 the Palestine Regiment was formed, again plagued by the same mixed recruiting and its associated low quality problems (the regiment was derisively called the "Five Piastre Regiments", due to the large number of Arab "volunteers" that had enlisted just for the cash bonus provided by the Jewish Agency).

However, there was no designated all-Jewish, combat-worthy formation. Jewish groups petitioned the British government to create such a force, but the British refused. At that time, the White Paper was in effect, limiting Jewish immigration and land purchases.

Some British officials opposed creating a Jewish fighting force, fearing that it could become the basis for Jewish rebellion against British rule. In August 1944, Winston Churchill finally agreed to the formation of a "Jewish Brigade". According to Rafael Medoff, Churchill consented because he was "moved by the slaughter of Hungarian Jewry [and] was hoping to impress American public opinion."

After early reports of the Nazi atrocities of the Holocaust were made public by the Allied powers in the spring and early summer of 1942, British Prime Minister Winston Churchill sent a personal telegram to the US President Franklin D. Roosevelt suggesting that "the Jews... of all races have the right to strike at the Germans as a recognizable body." The president replied five days later saying: "I perceive no objection..."

After much hesitation, on July 3, 1944, the British government consented to the establishment of a Jewish Brigade with hand-picked Jewish and also non-Jewish senior officers. On 20 September 1944, an official communique by the War Office announced the formation of the Jewish Brigade Group of the British Army and the Jewish Brigade Group headquarters was established in Egypt at the end of September 1944 (the formation was styled a brigade group because of the inclusion under command of an artillery regiment). The Zionist flag was officially approved as its standard. It included more than 5,000 Jewish volunteers from Mandatory Palestine organized into three infantry battalions of the Palestine Regiment and several supporting units.

The brigade carried out aggressive patrolling during which it engaged in numerous firefights in order to improve its positions, clear the south bank of German troops, and take prisoners, and carried out small-scale raids against German positions across the river to test the enemy's strength and map out enemy defensive positions. In one notable raid, it was supported by tanks of the North Irish Horse and South African Air Force fighter aircraft. The South African pilots, many of whom were Jewish, flew in a Star of David formation during their attack run as a tribute to the brigade. During the raid, the brigade's infantrymen ran ahead of the tanks and mopped up the German positions, returning with prisoners and greatly impressing the seasoned troops of the North Irish Horse. The brigade first entered into major combat operations on March 19–20, 1945 at Alfonsine. In its first sustained action on March 19, the brigade killed 19 German soldiers and took 11 prisoners for the loss of 2 dead and 3 wounded in a series of clashes. The brigade then moved to the Senio River sector, where on March 27 it fought against elements of the German 4th Parachute Division commanded by Generalleutnant Heinrich Trettner.[18] From April 1-9, the brigade again engaged the Germans in a series of small-scale clashes. It returned to offensive operations during the "Three Rivers Battle", crossing the Senio River on April 10 and capturing the two positions allocated to it, establishing a bridgehead and widening it the following day. It was assigned to clear out a German redoubt to the left of its position that another Allied unit had failed to capture. The brigade managed to complete the mission in a fierce battle, wiping out all enemy positions in fifteen minutes. It subsequently engaged in a series of small-scale clashes and captured Monte Ghebbio in a battle with German paratroopers. The brigade was then removed from the frontline for rest and refit before the liberation of Bologna (April 21, 1945. The brigade's engineering units also assisted in bridging the Po River to enable Allied forces to cross it. The Jewish Brigade spent 48 days on the frontline in Italy - March 3 to April 20, 1945.

The commander of the British 10th Corps praised the Jewish Brigade's performance:

There are indications that brigade members summarily executed surrendering German soldiers, particularly SS soldiers, in order to take revenge for the Holocaust. Although Brigadier Benjamin urged his troops not to kill surrendering Germans, emphasizing that intelligence gleaned from interrogation of prisoners would hasten the end of the war, he and his staff understood the desire for vengeance among the soldiers, and no Jewish Brigade soldier was ever punished for killing or otherwise mistreating surrendering enemy troops

During the course of the Second World War, the Jewish Brigade suffered 83 killed in action or died of wounds and 200 wounded.] Its dead are buried in the Commonwealth's Ravenna War Cemetery at Piangipane.