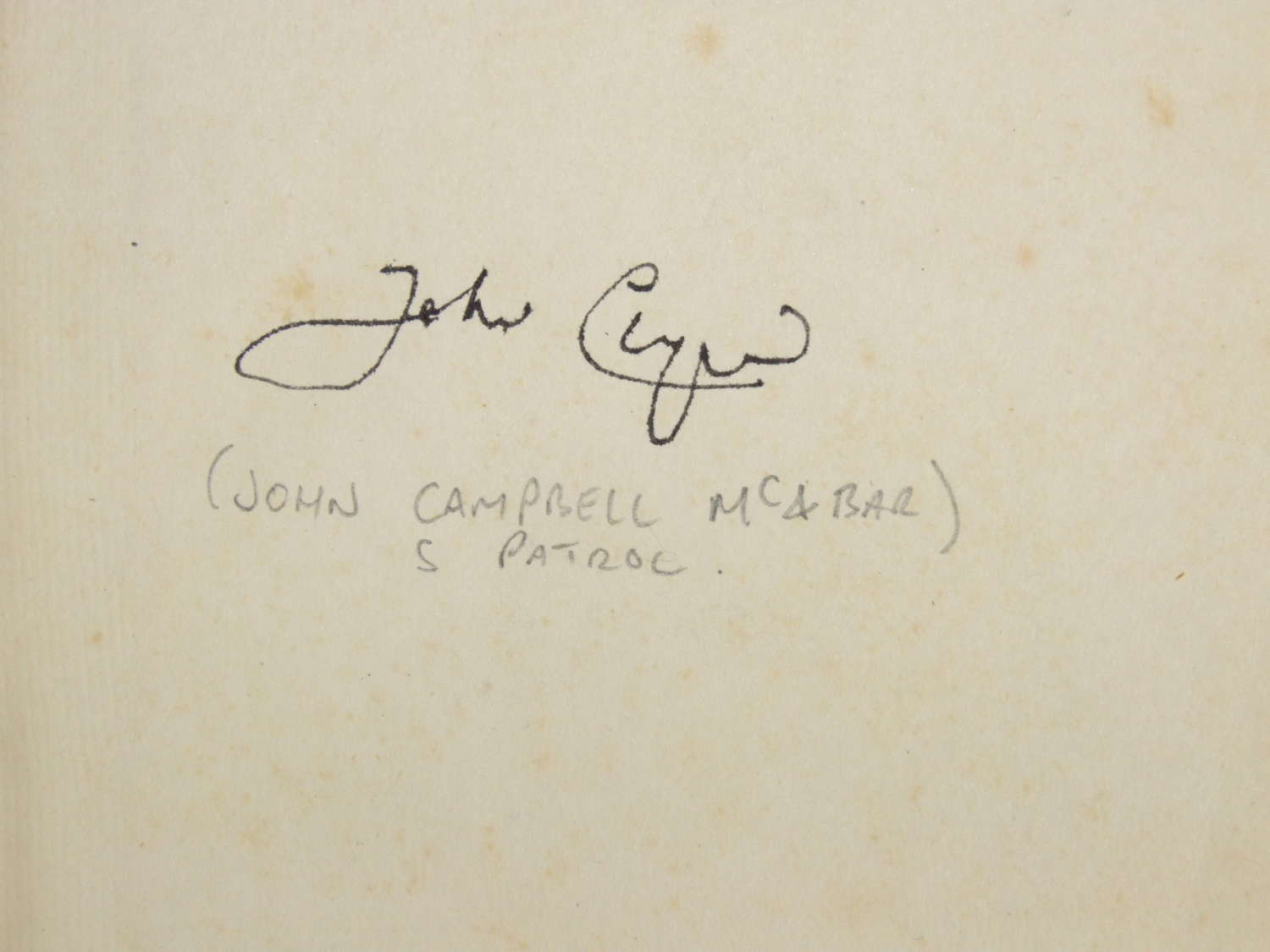 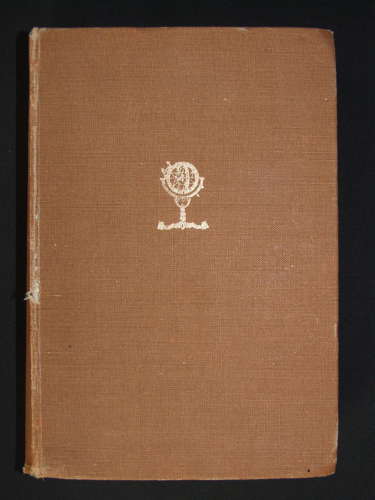 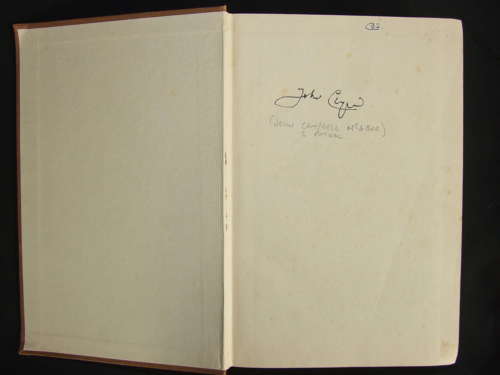 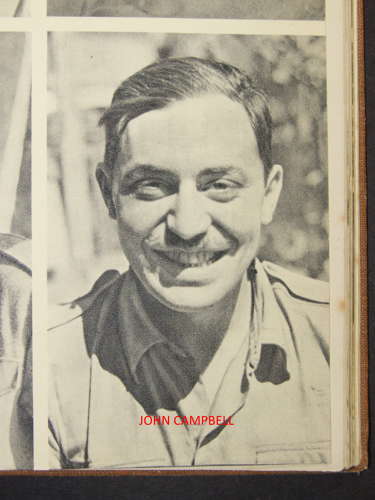 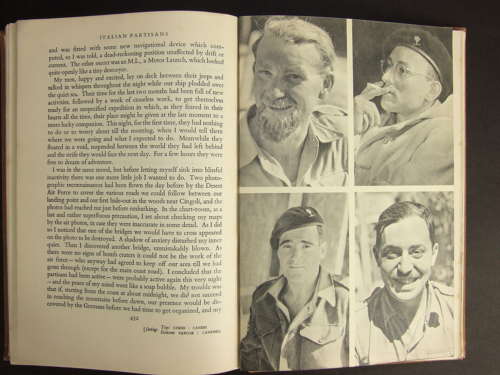 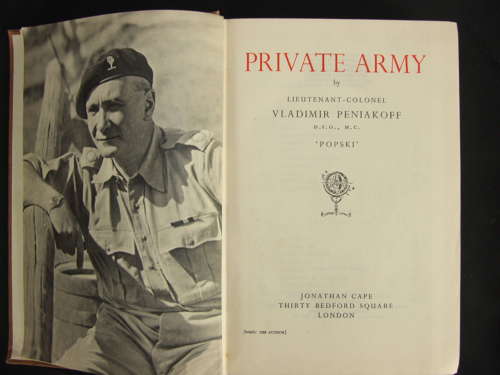 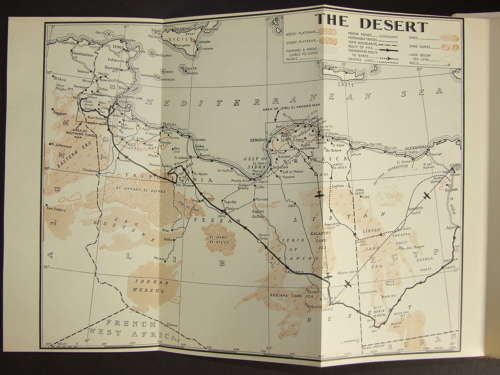 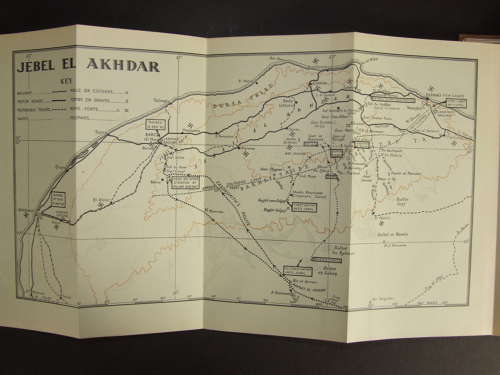 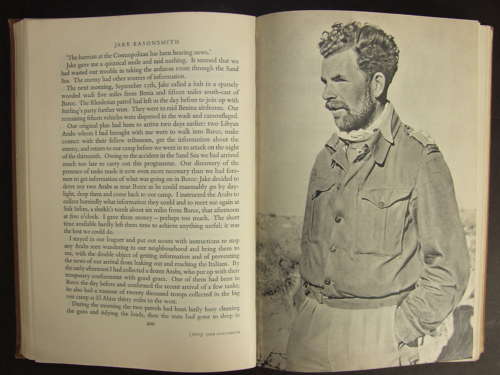 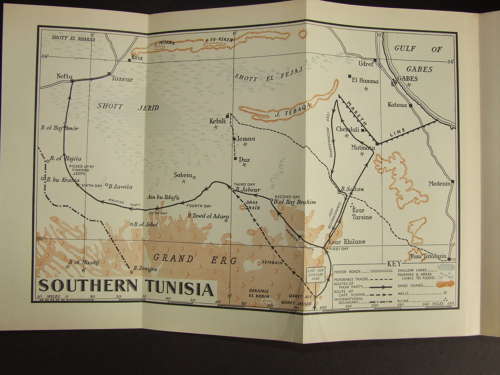 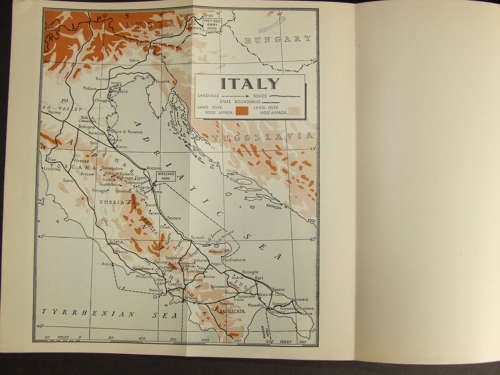 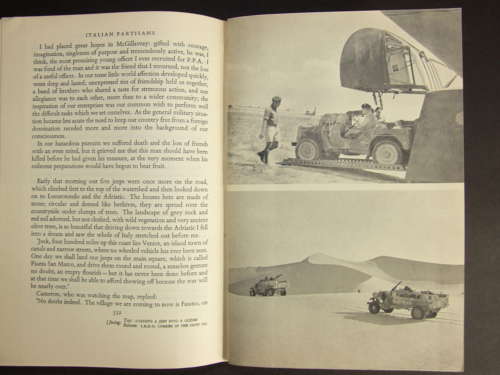 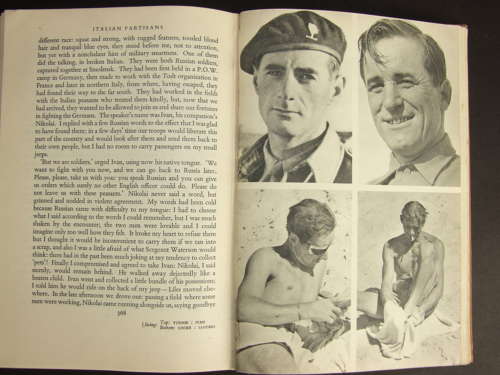 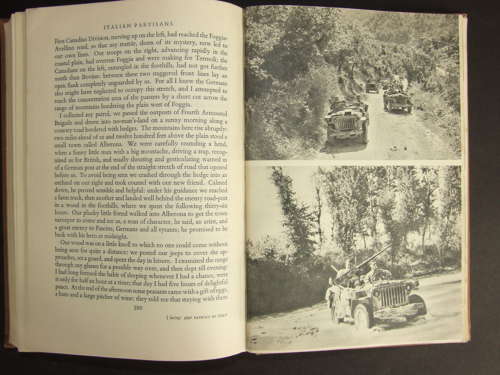 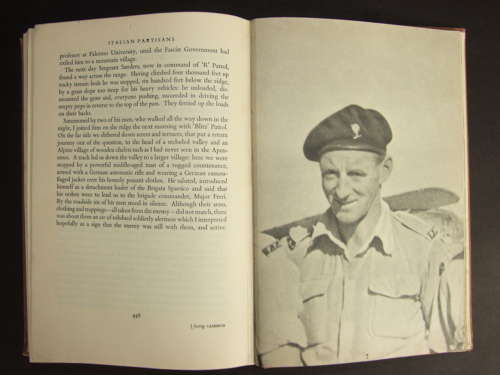 A 1951 seventh impression Copy of Private Army by Vladimir Peniakoff (Popski) signed by Major John Campbell who was twice awarded the M.C. whilst serving with P.P.A.

The book is in very good readable and features a picture of Campbell on page 432.

An amazing man, Campbell’s exploits are best described in his obituary:

John, aged 93, died only a few weeks after his childhood pal and Friends of Popskis Private Armt (FoPPA) Patron Sir Christopher Lee, who was thrashed at their prep school for hiding John's football boots. It was at this school in Queensgate, Kensington, that they both became dedicated Gugnuncs, and Christopher suggested that they should also both be spies. John's death leaves only two known survivors of Popski's Private Army.

"Most daring of us all"

Popski said that John rose to become the fourth of the original 'Big Three' PPA officers, having made a name for himself with his cloak-and-dagger operations as Skipper of 'S' Patrol. He also became, to the Allied rear headquarters in Italy, "known and feared for an awesome obstinacy" in wresting PPA's supplies and equipment from reluctant Quartermasters. Having started his overseas military career in unfortunate circumstances at El Alamein in 1942, John more than made up for this during the Italian Campaign where, Popski said, "when later I put him in charge of a patrol he developed into the most daring of us all...and got himself two Military Crosses."

John Davies Campbell was born in Monasterevan, County Kildare, on Armistice Day in 1921, to an Irish mother, society beauty the Honorable Eugenie Anne Westenra Plunkett, daughter of the 14th Baron Louth, and whose 1936 photographic portraits are in the National Portrait Gallery archives, and Major William Hastings Campbell. John's first birthday party was attended by three-year-old Pamela Firth, later to become Popski's second wife, the first of many strange coincidences in his eventful life.

Failure in North Africa then success in Italy

2nd Lieutenant John Campbell, Argyll & Sutherland Highlanders. After Cheltenham College he was studying Chemistry at St Andrew's when he was called up in the Summer of 1940, joining the Argyll and Sutherland Highlanders. John was commissioned a year later, then saw action as a platoon commander in the Battles of El Alamein in 1942. He narrowly escaped death in a shallow trench one day when his companion asked for a light. As John lit a match and leant over towards him a shell hit the back of the trench where his head had been seconds before. Later there was a minor action which didn't go at all well for him, with the unfair result that he was relegated to mundane rear-echelon duties. Eighteen months later, in April 1944, he was languishing in a Reserve Depot near Naples when he was given a strange  opportunity to get back into action by volunteering for Special Forces. The circumstances were rather odd: one day, thoroughly fed up with his lot in life, he started checking through his kit and found a small green box marked "Eating Chocolate". He had no idea how it got there but opened it and discovered that it contained an astonishing collection of German "booby-trap" devices, complete with instructions. He took it immediately to the Training Officer, a First World War veteran who proudly collected German militaria: "I've got something here which might interest you, Sir." In return the impressed and grateful chap asked John if he had any problems... "Well, I wanted to get into Special forces".

He took John straight to the Depot Posting Officer and bypassed a long queue of officers senior to John. The conversation went like this..."I say, Bill, I’ve got a candidate for Special Forces here, brilliant boy, just the type. Speaks Italian like a native." "Well," said Bill. "I know the Adjutant of No 1 Demolition Squadron. It's believed to be one of the most difficult to get into. I'll send him a wire. Will that do?"

At first Popski didn't like him but was persuaded by Captain Jan Caneri to give him a chance. It was over the following months that he surprised Popski, and possibly himself, by his success, as PPA's 22 year old new Adjutant, at outwitting the notoriously parsimonious Quartermasters of Eighth Army.

Two new Jeeps for each one blown up Popski's "Operation Astrolabe", a plan to get 12 Jeeps - two patrols - behind the German lines by an amphibious landing out of Manfredonia was literally sunk by an uncharted sandbar that grounded RNVR Lieutenant Henry Dale's Tank Landing Craft on a cold and moonless night. The sailors, men of PPA and a supporting contingent of 9 Commando, 140 in all, had to swim over to and cram onto P.402, an ex-US Air-Sea Rescue Motor Launch that was part of SOE's Adriatic Secret Flotilla. They were whisked away as dawn was breaking, while the Landing Craft, all the equipment, and the 12 lovingly prepared, heavily-armed, top condition, PPA-customized Patrol Jeeps were all blown up, barely a hundred yards from the landing beach.

Not that the many German troops and convoy drivers noticed, up on the overlooking coast road: they were in a frantic full retreat in the face of Eighth Army's pressure.

Back at PPA base at San Gregorio, high and deep in the Matese mountains, Lieutenant John Campbell and Corporal Ron Jewell had sat through the night, playing rummy, talking politics, and monitoring the Operation's signals coming through on the Brigade-strength SCR-299 Mobile Radio Station manned by Eighth Army attached Signalmen Hamilton Tyler and James Helleson. By the time Popski had got back to base, despondent at the failure of the mission and the loss of half of PPA's Jeeps, John had been to two different Quartermasters, and told each of them the same tale about the loss of 12 Jeeps in a "very secret operation that he was sure they knew about" (having made up a fictitious Operation name), wink, nudge, tap nose, to flatter their egos. Popski couldn't believe it when he got home and found 24 shiny new Jeeps waitingfor him.

In September 1944 Acting Captain John Campbell took over as Skipper of 'S' Patrol, as Eighth Army pushed hard up the Adriatic Coast to try to liberate Ravenna before the winter set in. This was an intense period for PPA, fighting on the front line as part of Lieutenant-Colonel Andrew Horsbrugh-Porter's "Porterforce", cobbled together around his 27th Lancers and including several rag-tag units because so many regular divisions had been withdrawn to Blighty for the Normandy Landings. John won his first Immediate Military Cross that December by sneaking up on a fortified farmhouse at night, having waded his six men breast-deep across marshy land for six miles. First thing in the morning they captured the 11 sleepy inhabitants without firing a shot, then coolly waited for two subsequent relief parties, capturing them too, and killing two officers who had come out to discover why their men kept on disappearing. The farmhouse was never reoccupied by the spooked Germans. John's tough Patrol Sergeant Bill O'Leary had won an MM during a similar sneak operation that John led only a few weeks before.

Unusually for PPA, the whole unit operated together at this time, working closely with Arrigo 'Bulow' Boldrini's very effective 28th Garibaldi Brigade of Italian Partisans. For the rest of the war the Patrols rarely saw each other. John perfected his fluent Italian here in the Byronic Pineta di Classe and made many Partisan friends that he kept in touch with after the war. It's not known if he kept in touch with "tough but comely" Ida though, who stole his automatic pistol but reluctantly returned it when told that he could be court-martialled.

PPA were continuously in action, alongside the 27th Lancers, for six months before withdrawing to their new base near Rimini for the winter, having helped to liberate Ravenna and its many Byzantine architectural gems. They and the Lancers (another forgotten unit of the Italian Campaign) were to fight together all the way up Italy and into Austria, playing to the firepower, strengths and agility of the 13-ton armoured Staghounds and PPA-modified 5cwt Jeeps.

It was during this period that John earned his nickname of "Bulldozer", having survived three German attempts to kill him on his 23rd birthday. He took these quite personally. The first two were anti-personnel 'S-mines', set off by his Jeep - just bulldozing his way through them - whilst the third was another example of the strange luck that seemed to follow him round.

He had just driven up to a farmhouse South of Ravenna, parking his Jeep by the door on the side away from the enemy of course, and went inside. No sooner had he done this than a shell came screaming over, prompted perhaps by an arty spotter noting his arrival. The shell came in through a second-floor window, flew down the staircase, went out through the open door, and then totally destroyed the Jeep.

Panzerfausts and 88's are no Bar to a Military Cross

The following April, during the fast-moving closing stages of the war in Europe, 'B', 'P' and 'S' Patrols, along with the Tac HQ 'Blitz' Patrol, were operating widely across North-East Italy, harrying the Germans with counter-demolition operations to preserve bridges, locating bombing targets and giving the impression that stronger forces were already facing them.

In the space of six days John charged at large dug-in German groups twice, all guns blazing. Each PPA Jeep had .30 and .50 belt-fed Browning machine guns, giving each patrol the firepower of a Battalion. The first group of about 40 Germans defending a farm had several MG's and a Panzerfaust, but the speed and ferocity with which John attacked in full daylight using only two Jeeps, overwhelmed them, resulting in 8 dead, 10 wounded and the remainder captured. Only days later he spotted a small battery of 88's firing on Padua and surprised them by coming into the village through a side road. The same all-out attack tactic as before resulted in the capture of the guns, their precious predictors, the crews, ammunition and three truck loads of petrol. For these actions John was awarded an Immediate Bar to his Military Cross.

'S' Patrol didn't lose a single man throughout all their hazardous operations, except Private Albert 'Chalky' White, only days after Germany surrendered. He was shot by Tito's Partisans as PPA's Patrols were sent out"to contact them and establish good relations". In reality PPA and the 27th Lancers had been tasked by General McCreery with pushing as far into Austria as possible, as quickly as they could, to limit Stalin's and Tito's post-war political and territorial ambitions.

After PPA was disbanded in September 1945, John Campbell spent the next seven or eight months somewhat dispirited after the freedom of special operations, firstly as Assistant Town Major of Velden am Worthersee and then as Town Major of Judenberg, administering 3,000 square miles of territory on a pushbike. This period at least allowed him to visit Popski in Vienna from time to time, where he had become the British-Russian Liaison Officer, newly promoted to Lieutenant-Colonel. John was finally demobbed in 1946 with the honorary rank of Major.