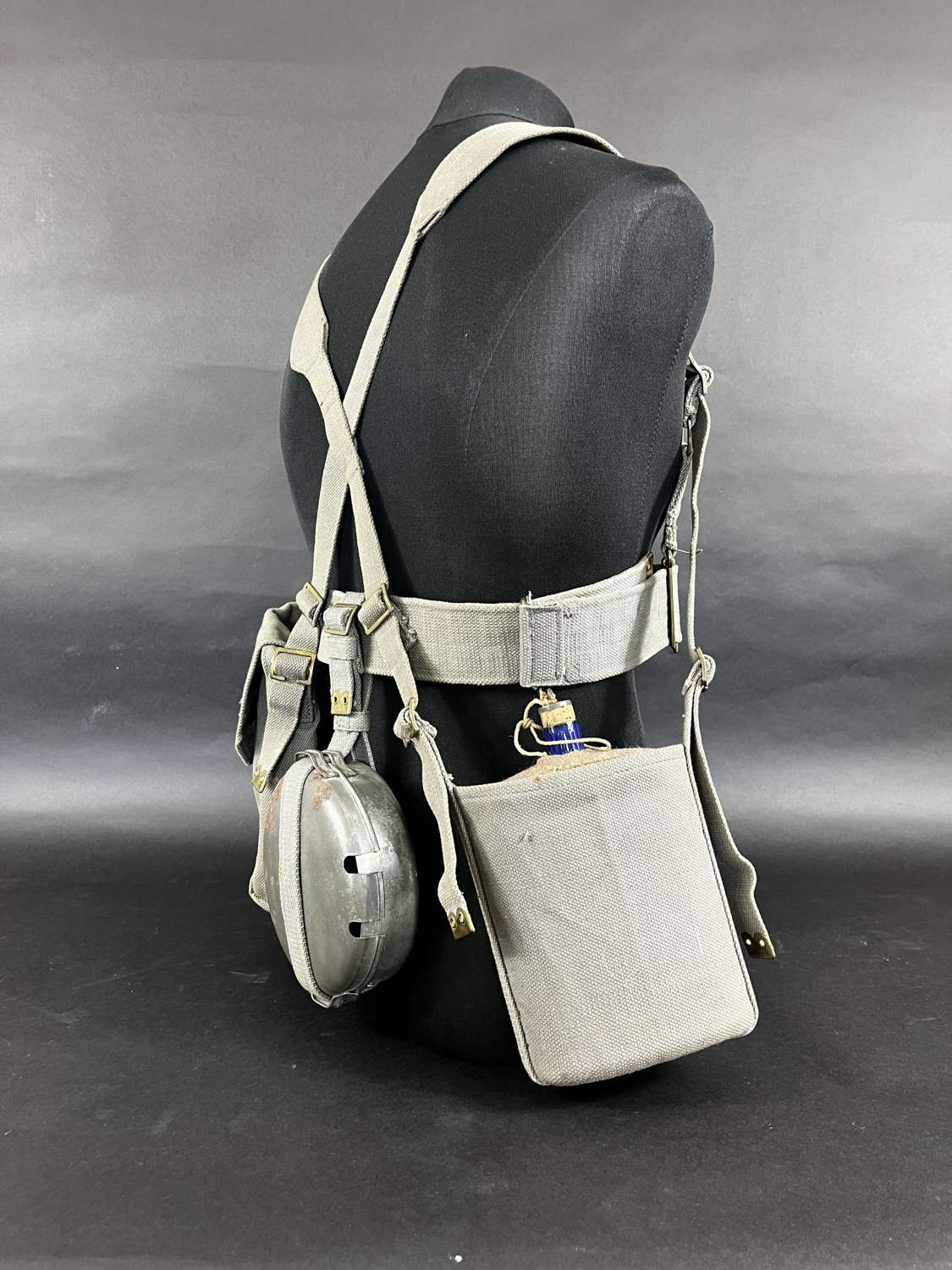 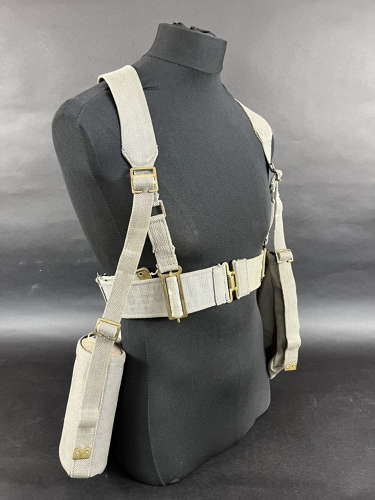 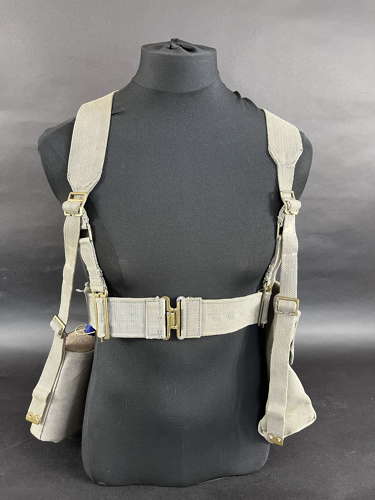 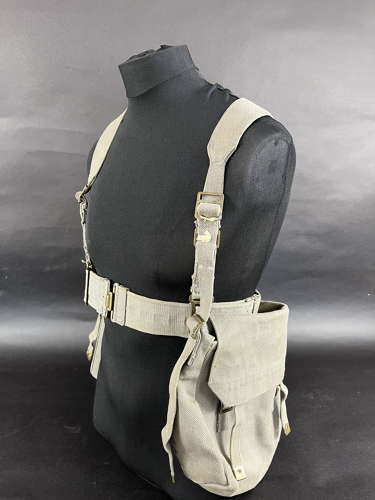 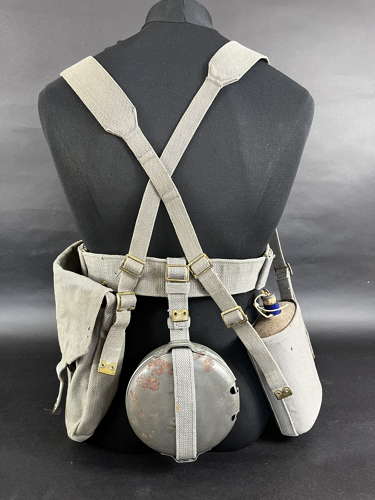 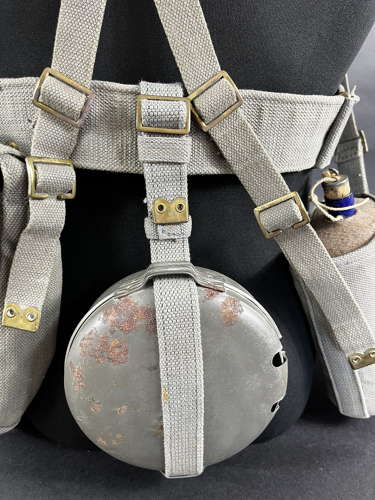 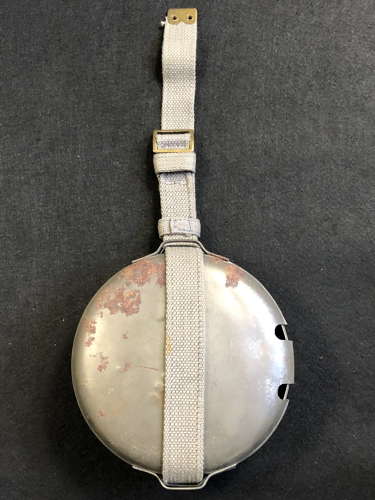 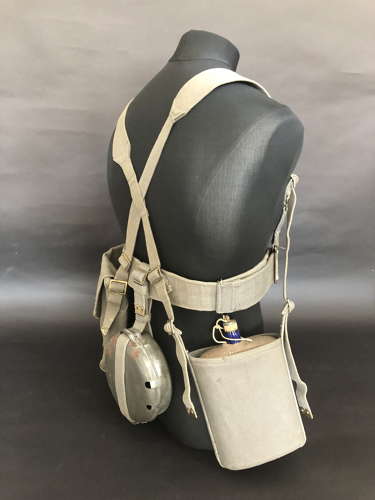 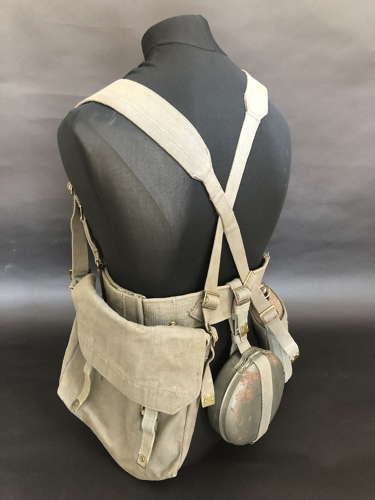 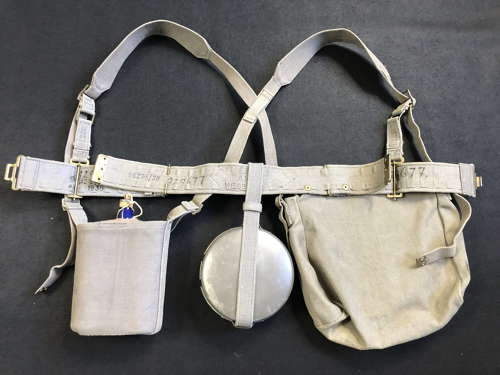 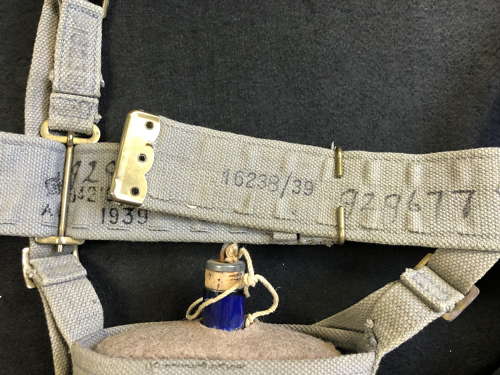 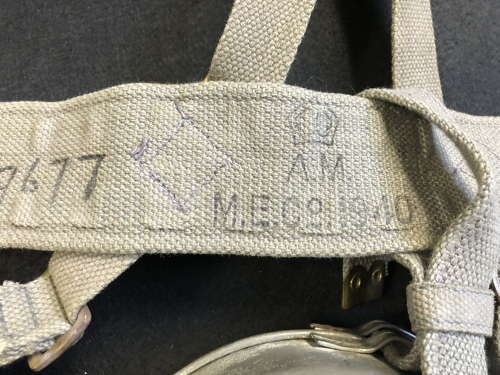 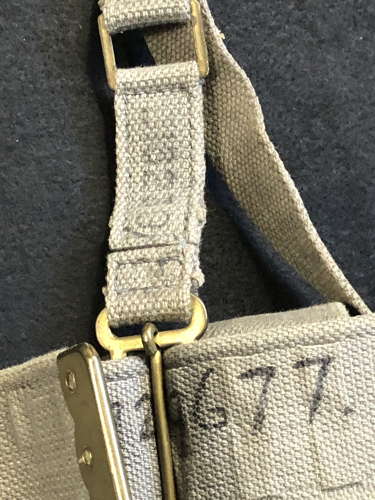 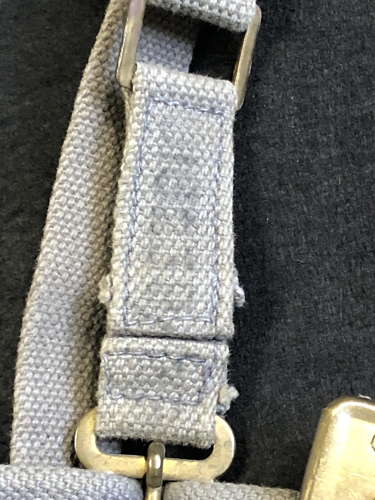 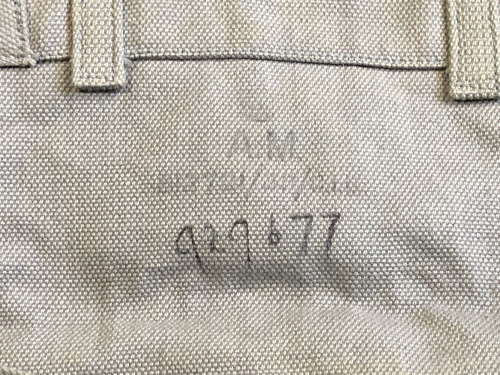 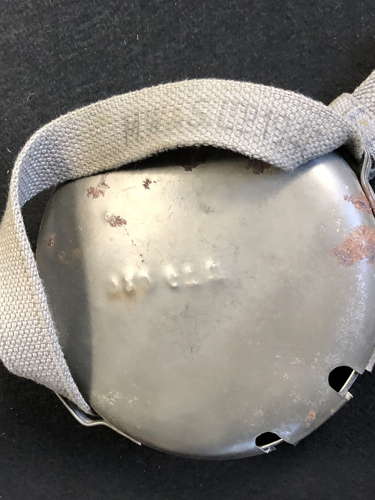 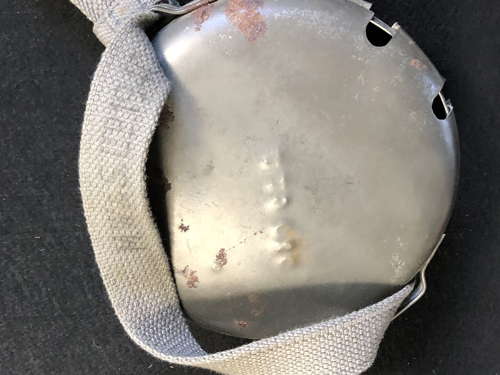 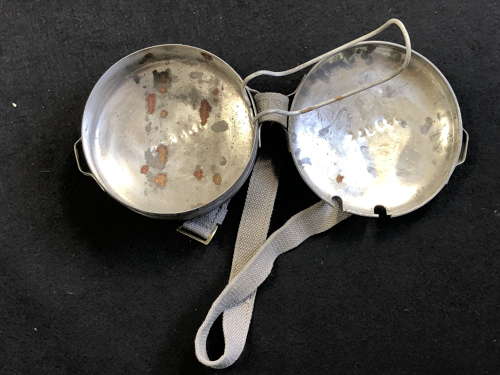 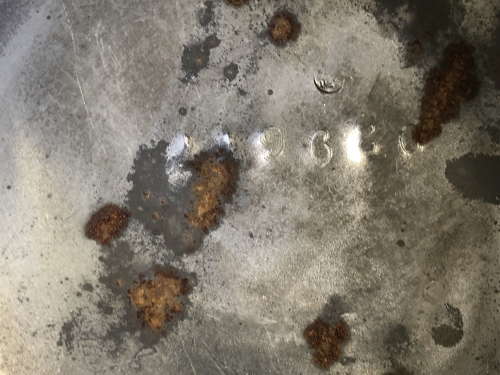 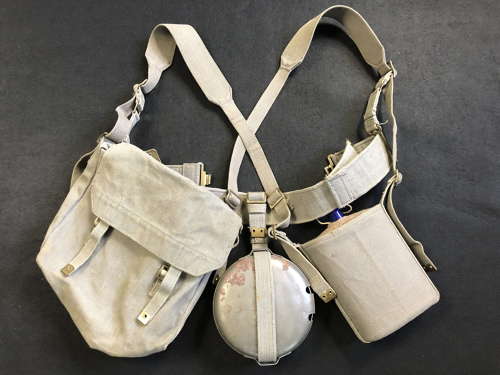 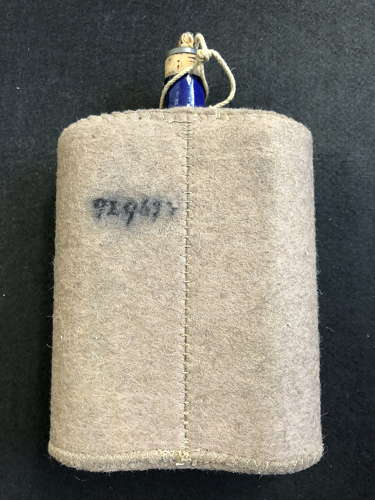 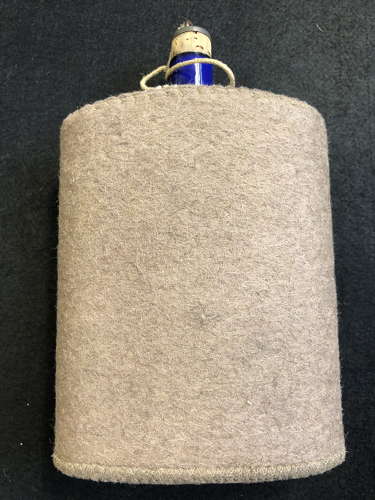 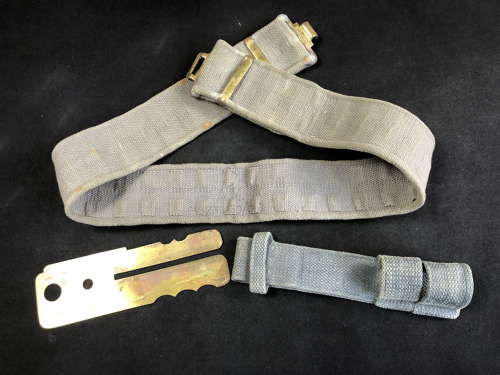 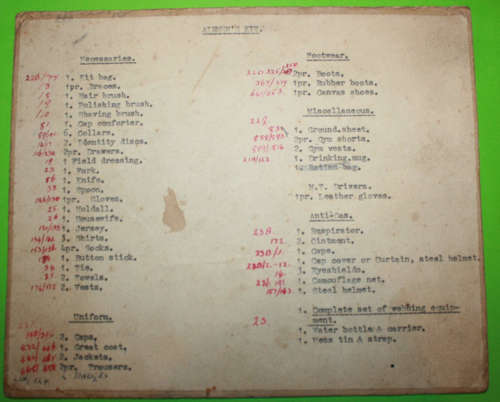 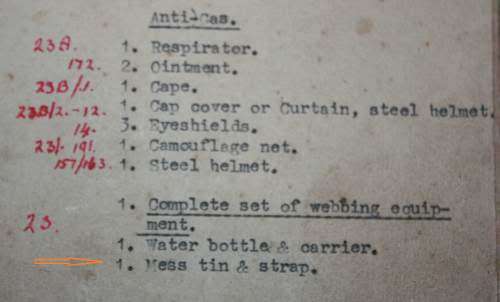 A very interesting absolutely "complete as issued" set of RAF 1925 Webbing and Accoutrements, with each piece  numbered to the same Airmen,929677, and all webbing items dated either 1939 or 1940.

Though most 1925 and 1937 Patterns items resemble each other and are interchangeable, each piece specific to each set is actually subtly different one from the other and can be told apart.

This 1925 was set was found exactly as assembled and has not been touched. In the small pack were found an Air Ministry button polishing stick, and the loose RAF 1937 Pattern Webbing Belt and Bayonet Frog as shown. This Belt and Frog are notable in that not only are they from the subsequent pattern of webbing on issue, they are also a slightly different shade of RAF blue-grey.

The Water Bottle and Mess Tin & Strap that came with the set are most interesting. The Water Bottle is a proper 1925 Pattern example from the late 1920’s. These are recognisable from the WW1 rough tan wool cover, which were still on issue in the 20’s, being worn with a blue enamel Bottle. RAF blue-grey Bottle covers did not appear until after WW2, and 1937 Pattern Khaki Bottle covers are a different type of wool altogether. The Bottle cover  is further enhanced by having the Airmen’s service number applied to it.

The Mess Tin and Strap from the set are without doubt the most interesting items of all.

The Mess Tin is the round Army “Mounted” Pattern which was officially prescribed to the RAF at the start of WW2. At this time for efficiency’s sake a decision was taken to issue Army Mounted Pattern Mess Tins to new RAF recruits as the cavalry was diminishing in size, whereas the RAF was growing exponentially.

As with the other items in the set the Mess Tin is nicely marked with the Airmen’s service number.

The Mess Tin Retaining Strap is by far the rarest item of the set, this being an item specifically created for the Air Ministry to go with the newly issued Mounted Pattern Mess Tins, I believe these were only made in 1940. In 1941 the RAF switched to 1937 Pattern Webbing and the universal rectangular Mess Tin that came with it, this needed no Retaining Strap.

My last two images are of an Air Ministry Kit List for Airmen from 1940, this shows the Mess Tin and Strap as displayed on issue.

A pair of 1925 Pattern shoulder braces,

A pair of 1925 Pattern brace attachments,