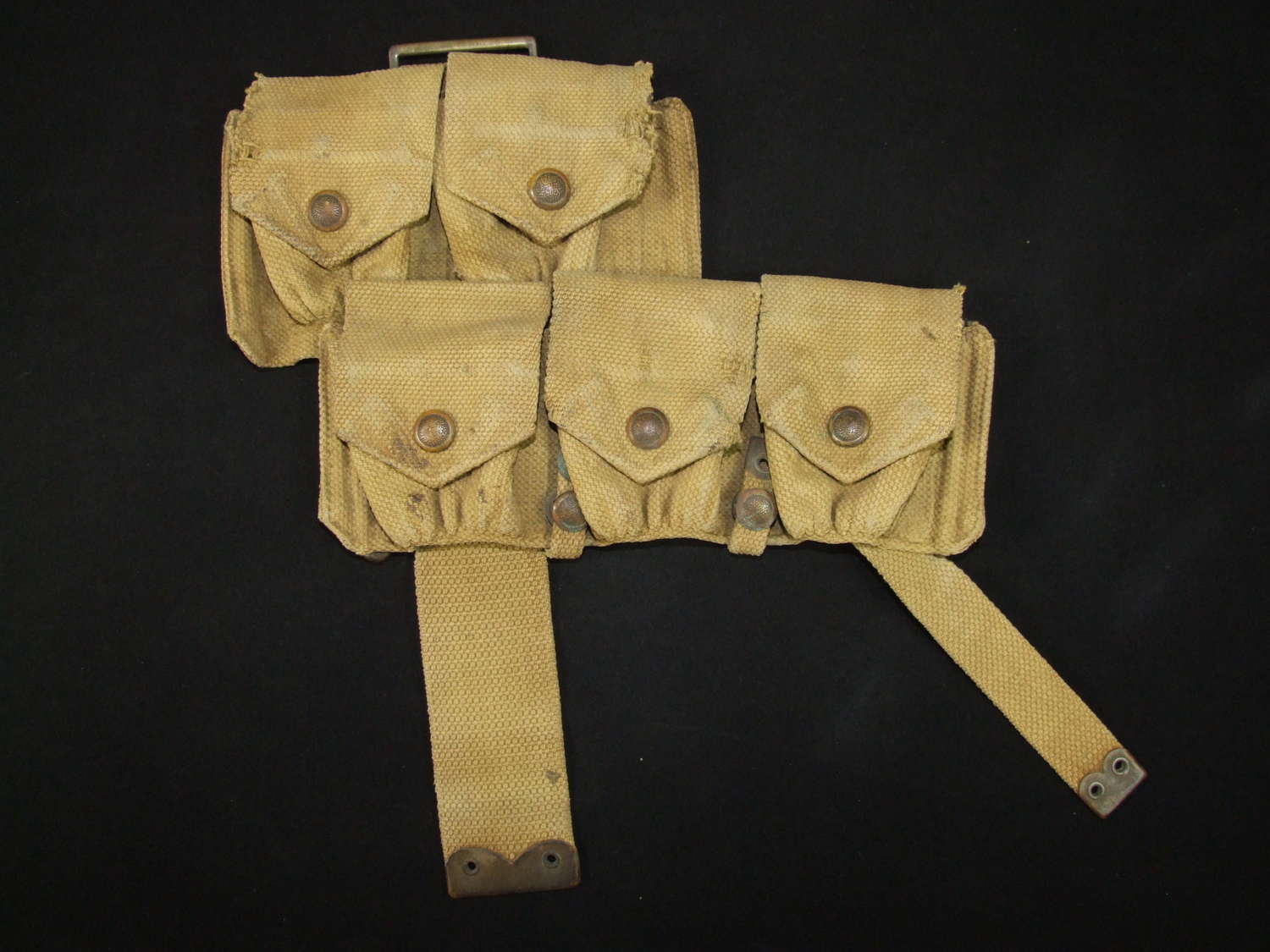 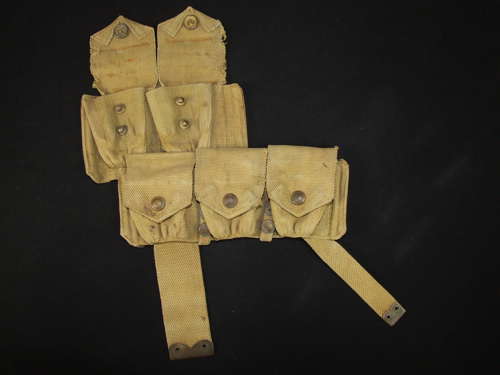 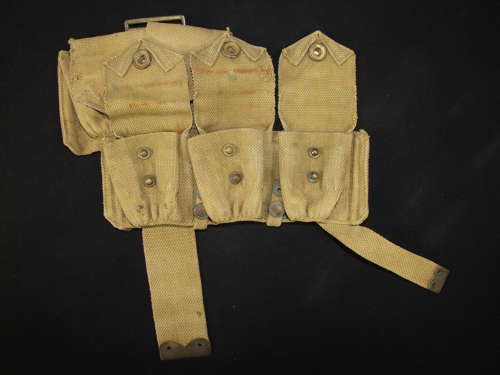 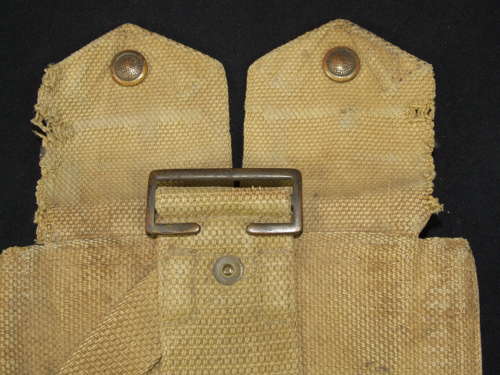 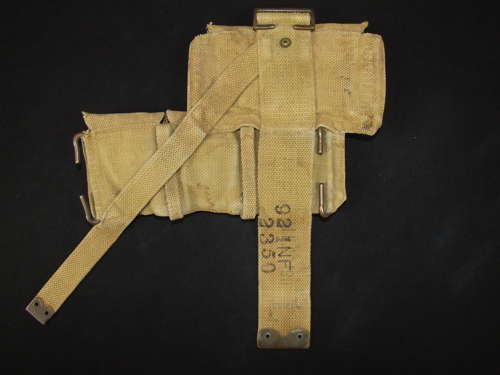 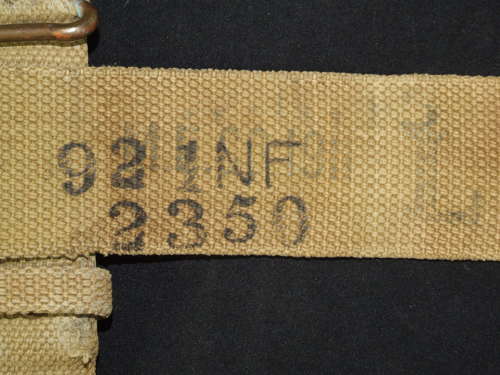 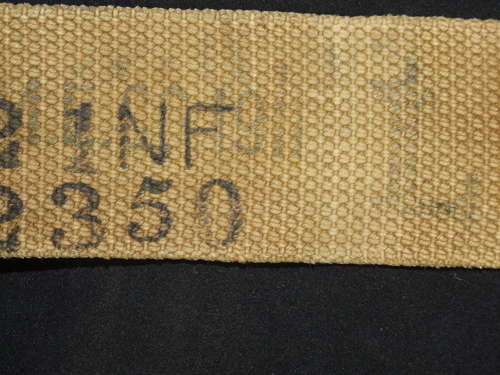 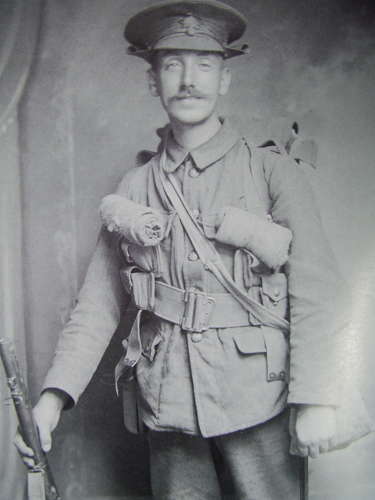 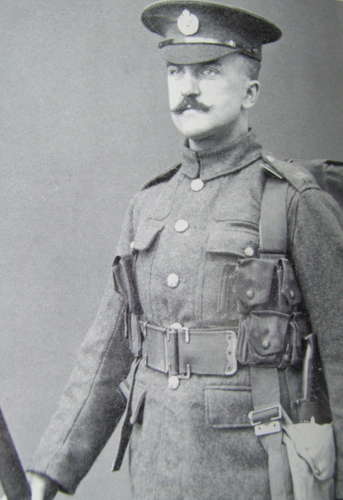 A very good example of the rare Unmodified Left Hand 1908 webbing Ammunition Pouch Set in unblankoed condition, this being the pattern the British, Canadian and ANZAC Armies went to war with in 1914. 1911 dated

Not long after hostilities began it was found that the lower three pouches from the Left Hand 08 Pouch Set had a design flaw, they tended to snag open when a soldier leant against a parapet leading to ammunition being lost.

In order to rectify this fault on the 17th of October 1914 a new modified Pattern of Left Hand Pouch Set was specified. This had the flawed simple press stud closure of the lower three pouches from the Pouch Set replaced with a more secure press stud and strap arrangement. This new modified Left Hand Pouch Set was designated the MKII, manufacture of which began in 1915 and it continued in that format until the end of 08 webbing's existence, making it the Pattern most familiar to collectors.

An Unmodified Left Hand 08 Pouch Set is absolutely crucial for any early WW1 British or Anzac representation, be this the Battle of Mons, Loos, or indeed Gallipoli since the 1915 manufacture start date for the new MKII Left Hand Pouch Set, combined with the inevitable delay in issue, meant it did not reach these theatres in time to see action there.

This rare Unmodified Left Hand Set is in very good serviced used condition. It is unblankoed and retains a strong light tan colour to the webbing. There is slight fraying to the edges but no damage and with all press fasteners working correctly.

Nicely dated 1911 is carries issue markings to a soldier in the 1st Battalion Northumberland Fusiliers. This Battalion was a renowned pre war British Regular Army unit and landed in France on the 14th of August taking part in the famous Battle of Mons just one week later.