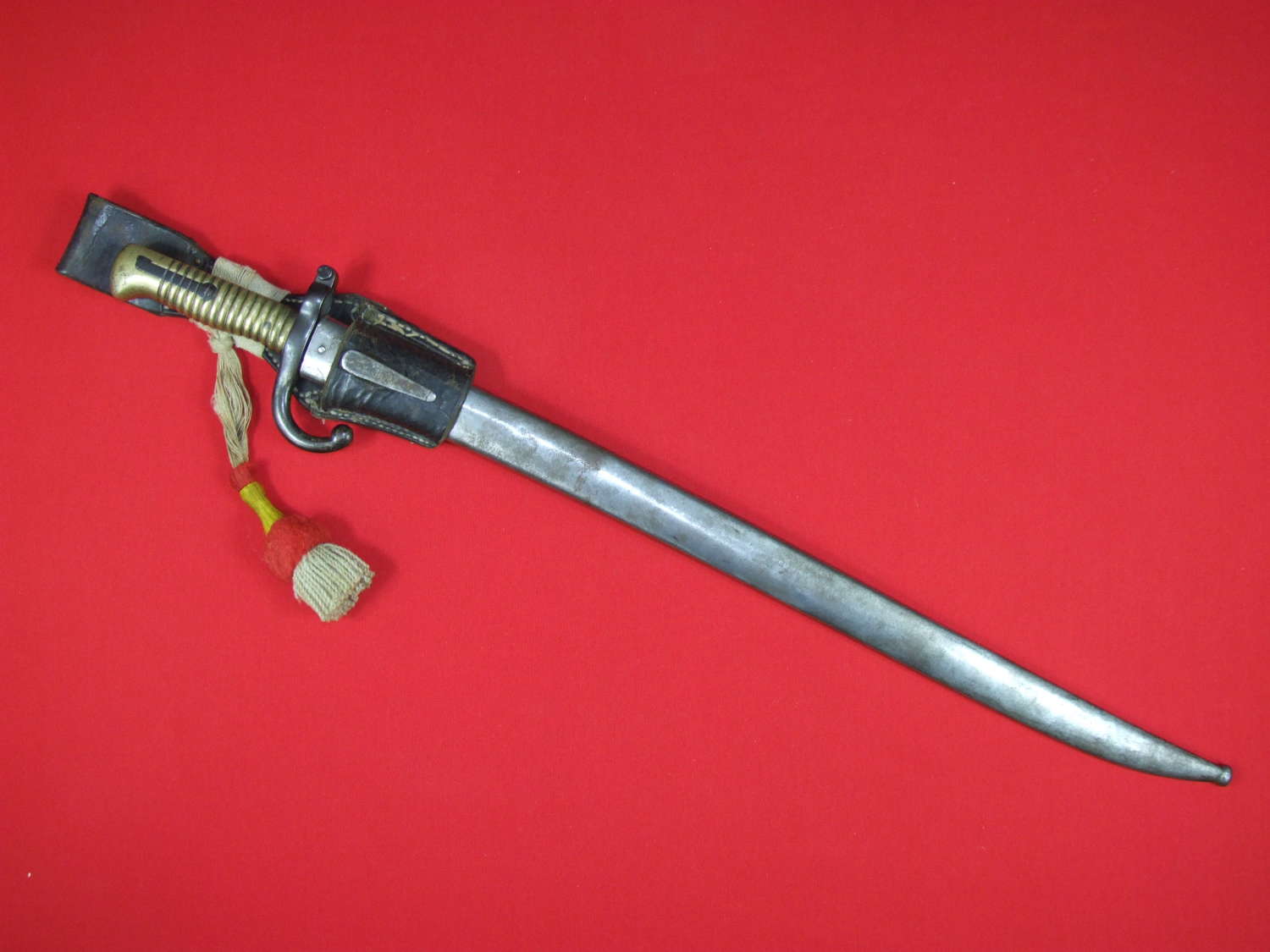 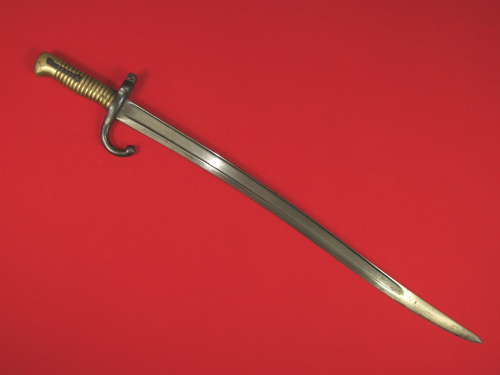 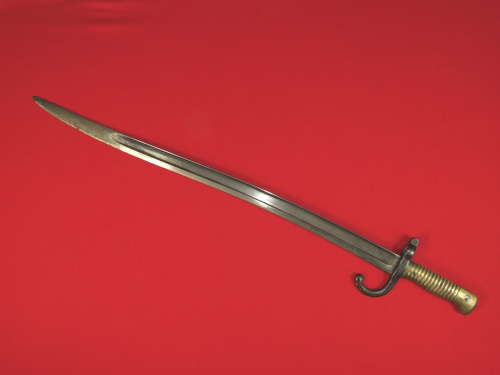 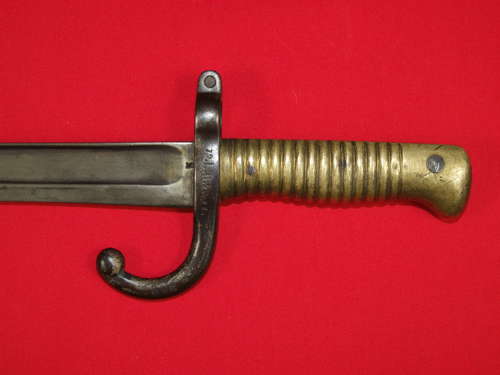 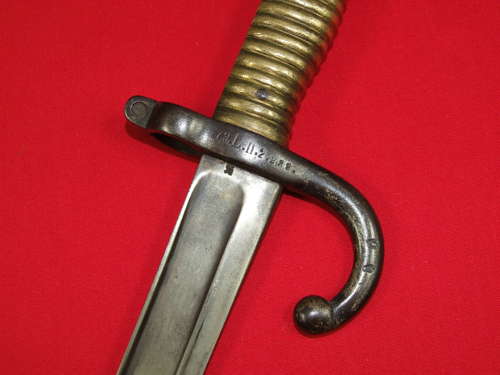 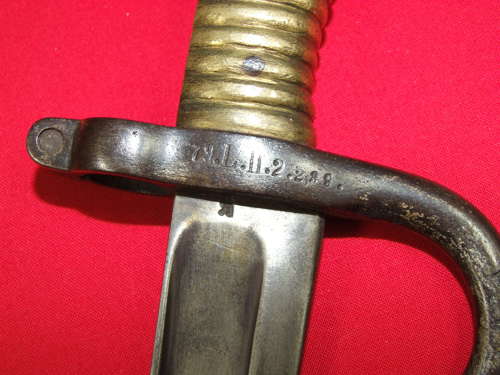 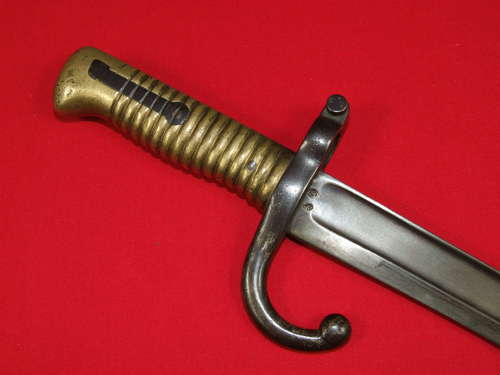 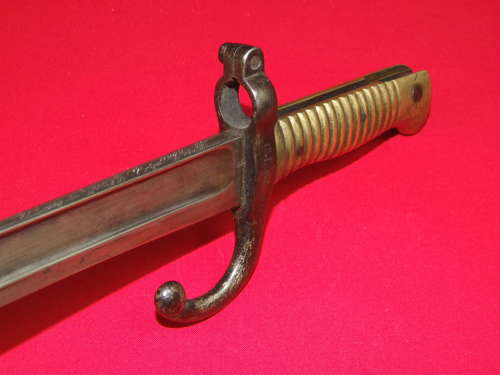 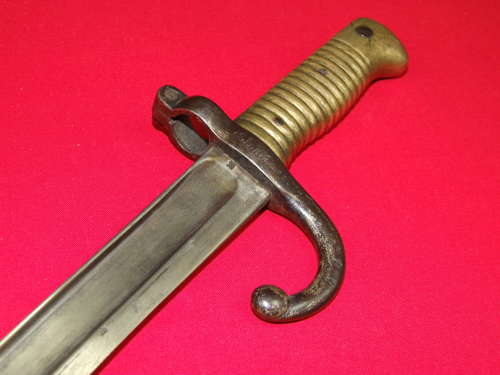 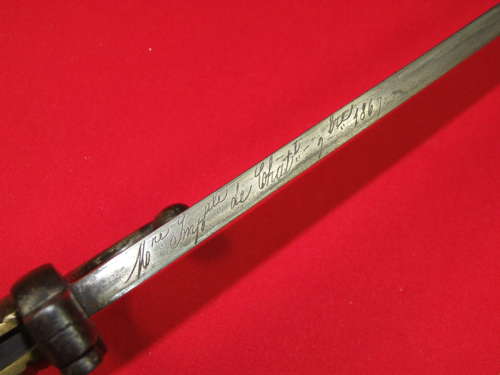 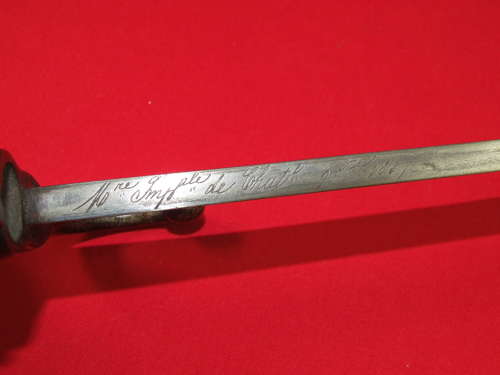 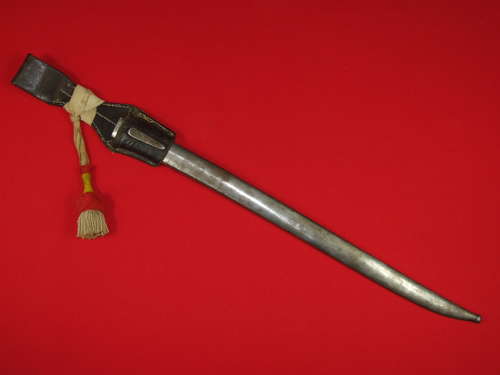 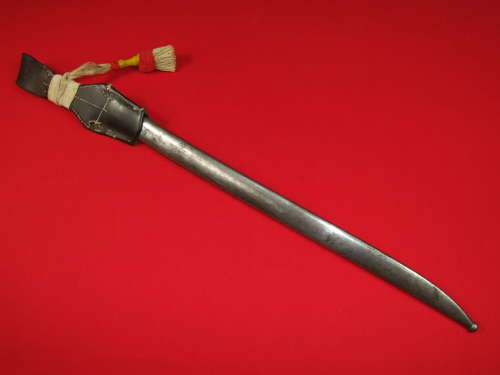 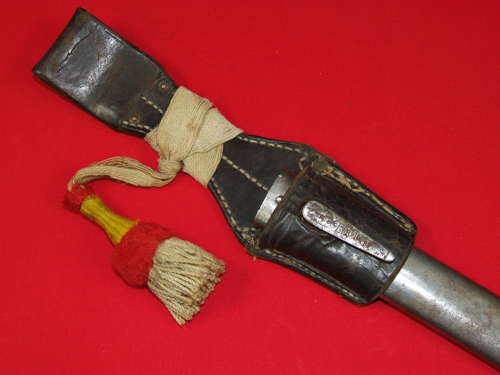 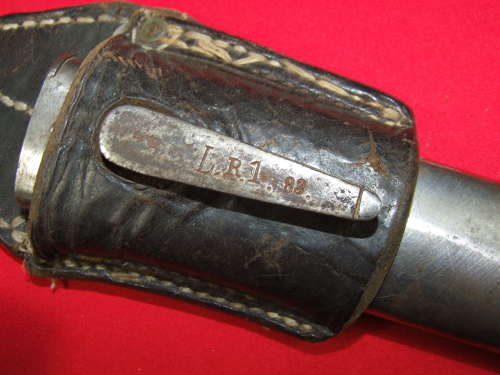 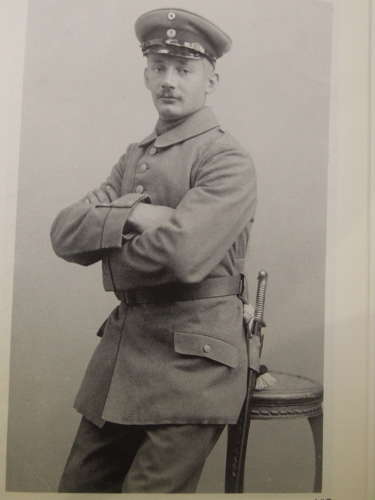 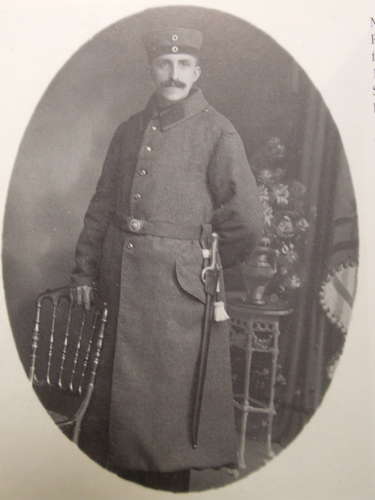 During the Franco-Prussian War of 1870 the German Army captured a large amount of Chassepot bayonets from the defeated French. These were taken into store by Germany and upon the outbreak of WW1, due to the prevailing weapon shortages, some were re-issued to various of their own reserve units, either as ersatz rifle bayonets, or as sidearms for specialist troops once a few appropriate modifications were made. Of these German re-issues the specialist Sidearm version is obviously much rarer than the ersatz Bayonet version given the naturally much smaller number issued.

When used as a Sidearm by the Germans, most typically , as seen on the example offered here, the now pointless locking knob to the handle was ground down and its mechanism fixed solid. Equally appropriately of course the metal loop to the scabbard's top to attach the French bayonet frog was removed and this was replaced by a long stud in keeping with the German style of frog, again as found on the example here.
The type of WW1 German reserve troops that could be issued these Sidearms would be any armed simply with a pistol, such as machine-gunners, telegraphist, stretcher bearers, transport personnel etc.

This German Chassepot Bayonet Sidearm is in very nice condition with a lovely French Manufacturer's date of 1867 to the spine of the blade, this absolutely in line with an item having been in action and captured during the 1870 Franco-Prussian War.
The Chassepot also has various French issue numbers stamped to it, however most significantly, in addition to those it has a subsequent German Landwehr Regiment issue marking to its crossguard.
The German frog stud modification to the scabbard quite beautifully and unusually equally has a German Landwehr Regiment marking. The Landwehr unit shown on the scabbard stud is slightly different to the one shown on the crossguard however the weapon number is the same, this perhaps indicating the original owner transferred between units which is quite appropriate of a specialist.

Delightfully the Sidearm retains its original Frog and Company Knot. The Frog is a well used brown and is of typical wartime ersatz civilian manufacture with the rough of the leather to the inside. It is unmarked but it cannot have been made any later than 1915 as its securing rivets are brass, these were transitioned to steel on all Frog manufacture later that year.
The Frog appears to have been made specifically for this Sidearm as it is slightly longer than the norm to accommodate the longer than the norm handle of the French made Chassepot. As such this special Frog must be a somewhat rare WW1 German item in itself. The period photgraph of the greatcoated soldier at the end of this listing appears to show just such a specifically made frog in use

The Company Knot is the standard issue type, the red and yellow configuration shown here indicating the wearer belonged to the regiment's 7th Company. The colours remain bright and the Knot is absolutely complete with no elements missing though there is the odd bit of fraying to the strap. The steel retaining rivet to the centre Chassepot's brass handle has equally left a rust spot to the central crossover of the strap, this however does rather nicely indicate that the Frog, Knot and Sidearm have remained together and untouched since WW1.

UK shipping only to those of 18 years or above.