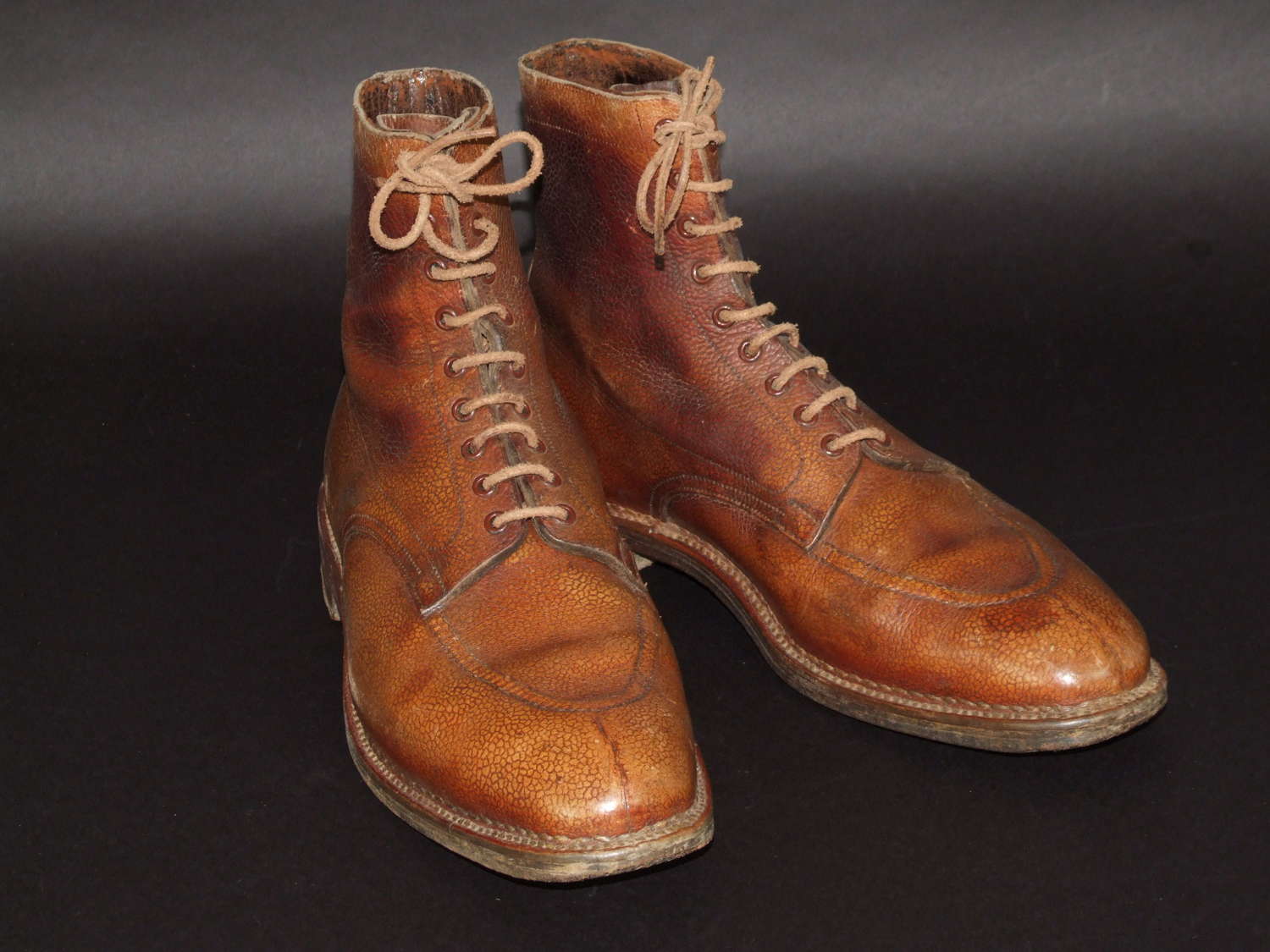 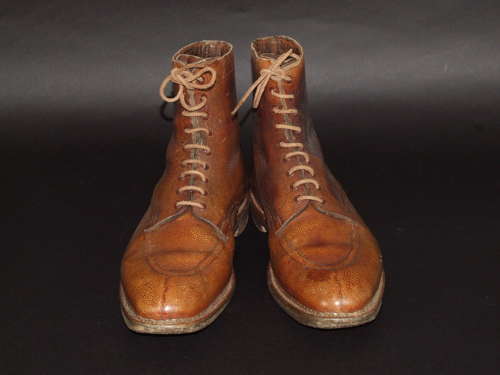 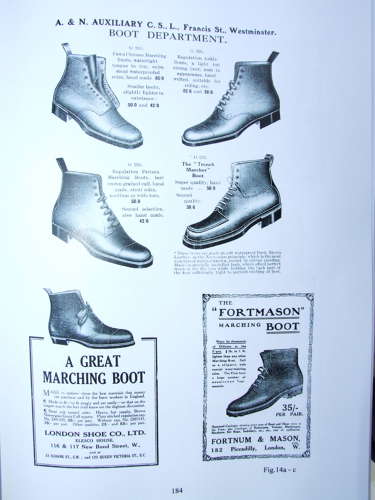 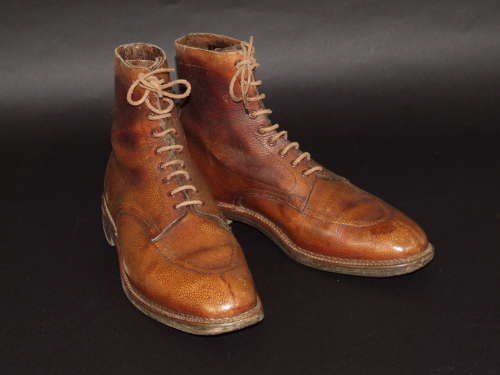 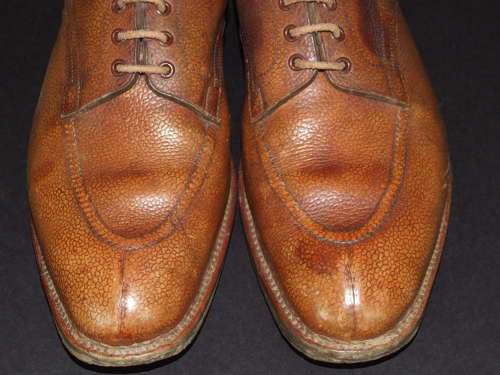 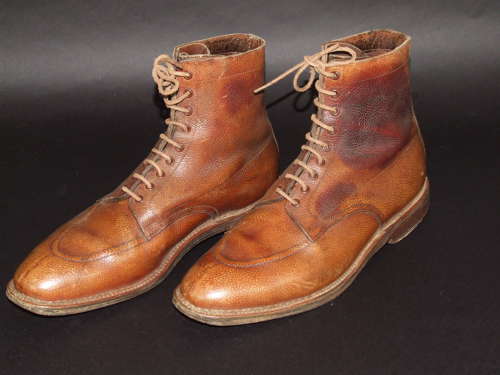 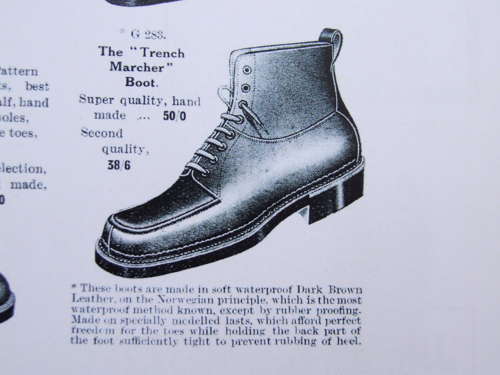 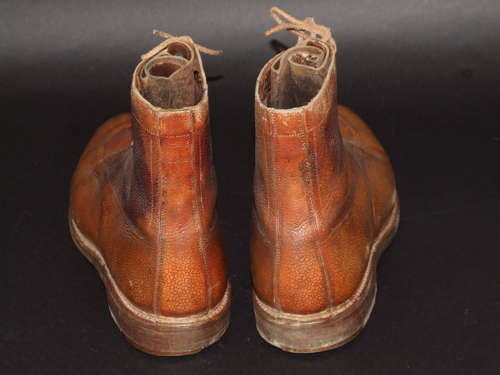 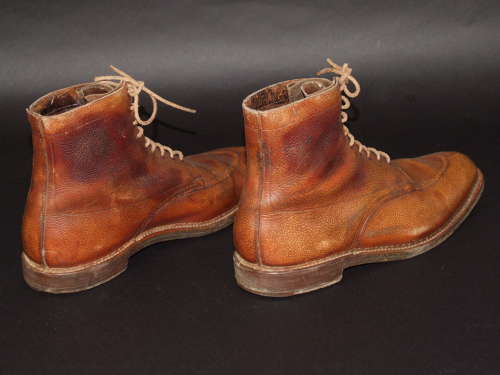 SOLD
WW1 BRITISH OFFICER'S SPECIAL PATTERN TRENCH ANKLE BOOTS
A very good pair of the renowned WW1 special pattern Trench Ankle Boots for British officers. These Boots were specially developed in WW1 for their waterproofing qualities following the high incidence of debilitating “trench foot” amongst British officers. They were based on the “Norwegian” boot seaming principle which at the time was the most waterproof method for footwear known aside from rubber proofing.
In essence this Boot’s special seaming dispensed with toe caps and moved the seaming to the top part of the “foot” section of the Boot where it was folded back on itself to make it watertight. This process formed a very distinctive ridge from the top front of the Boot to the lace up closure, at which point the ridge was then sealed via the “galosh” part of the Boot’s tongue.
A crucial part of the process to make the seaming tight involved the “toe” part of the Boot being pleated, this again making this special Trench Pattern very recognisable. My last two images are of a period officer’s outfitting advertisement for the Army & Navy stores, this showing this special pattern of seaming on their “Trench Marcher Boot”.
Absolutely typical trench footwear for the British officer from the mid-war point onwards this distinctive WW1 pattern of Boot is rather scarce today. This because immediately following the end of hostilities the now much more rigid  “professional" British Army banned the wearing of this special waterproof seaming as there was no toecap to polish.
Very typically for fighting footwear these Trench Boots have some service staining to the leather, there are however in very nice condition overall and complete with leather laces. There is no size marking that I can find but they appear to be a good size 9.
The Boots are nicely maker marked “Maxwell, 9 Dover Street W1 and at Paris" to the top inside edge. This being one of the top bespoke gentleman’s outfitters of the First World War. The numbered postcode displayed came into use from 1917 onwards placing these Boots year of manufacture at only 1917 or 1918 given the post war Army ban. The Paris part of the maker’s address is again very typical for front line footwear, from necessity this more than likely the location where these Trench Boots were purchased.
A quintessential British Officer’s trench item.